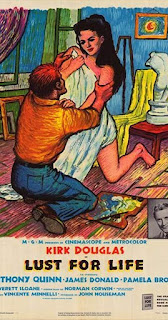 Young Vincent Van Gogh (Kirk Douglas) washes out as a pastor, is lonely, takes up painting, mooches off his brother, is lonely, cuts off his ear, then kills himself. And everyone lives happily ever after.

This expressive if sanitized version of Van Gogh’s life is visually impressive. Director Vincent Minnelli spray painted a field so that the colors would match Van Gogh’s pallet. The main beats of his life are touched upon but let’s face facts. The life of Van Gogh isn’t all that uplifting. He struggled with mental illness, was never appreciated during his time, was lonely, lived in poverty, and finally committed suicide. Did I mention he was lonely? No matter, the film covers that point. Maybe it says more about modern audiences that the tortured genius needs to have that moment of redemption, ala A Beautiful Mind, but the film ends up reading as “bad stuff happens to guy we care about”.

I’ve seen few Kirk Douglas films, and frequently I’ve confused him for Charlton Heston, but I wanted to give this legend his due. Upon his recent passing I looked for one of his films to watch. I couldn’t easily get my hands on Paths of Glory (for free) but TCM was running Lust for Life. It was a natural choice. The Bad and the Beautiful wasn’t going to happen.

I wanted to love Lust for Life, but couldn't. As mentioned it is a great looking film, and Douglas’ performance was impressive, if a little one-note, but I wasn’t drawn in. The story plodded along at times and characters entered and exited the story before we got to know them. Van Gogh was not a heroic character. We don't see a flawed character overcome his obstacles, and it was too sanitized to be a compelling biopic. AMRU 3. 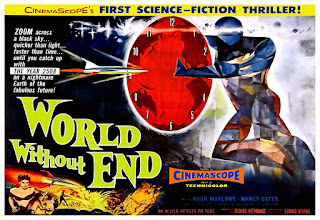 Four astronauts are on a mission to Mars when they lose contact with Mission Control. They’re fine, it’s just that Martian magnetic field. But on their return trip they enter a time warp and return to Earth over five hundred years in the future, after a great nuclear war.

Boy, the science here is a mess. I don’t want to get into it but I pause when our hero says things like if Mars has grass, then there’s no reason why it can’t also have life. Really, people? And our heroes act absolutely stupid sometimes. They get excited when finding a cave (because, you know, caves!) and explore it. There they find a six foot spider web, so one of the men starts plucking at it. You’d think that’d be something they would cover in astronaut training. Wow, imagine the spider that created that! Don’t imagine too long because soon they are attacked. By spiders ABOUT THE SAME SIZE AS THE WEB!

The H.G. Wells estate sued the producers because they thought the story too closely resembled The Time Machine, and to be fair it has some superficial similarities. Our heroes travel in Time in a Machine to find a post-apocalyptic Earth where the surface is dominated by brutes, or “Mutates”, and there exists a society of timid normals. Here they are hiding in a high tech underground bunker. Oddly, four years later The Time Machine was made into a movie, also starring Rod Taylor.

The men in the underground are weak, unimpressive, middle aged men, while the women are vivacious beauties in their early to mid-20’s who are anxious to get some twentieth century manly-man action. Our heroes try to convince the leaders to go on adventures to retake the surface, but they are just frightfully fearful old men and refuse to help. How can a few womanizing, gun loving manly-men convince an entire population to risk everything to impose their version of right and wrong on them? Only time will tell. 80 minutes, to be precise.

World Without End is shallow, provincial, and low budget, but not without its charm. Their adventures, silly as they can be, do keep your attention. If you overlook the 50’s attitude, you can enjoy yourself. But there are better films of the genre from the era. AMRU 2.5.


“Our women seem to have lagged behind in their evolution into reasonable creatures. They actually admire these reckless and brutal men.”

Posted by Fred Theilig at 5:30 PM No comments: