William Holden plays Joe Gillis, a hack writer down to his last straw. While escaping the men who would reposes his car, he hides in what he believes to be an abandoned mansion on the famous boulevard. The mansion is in fact occupied by the above mentioned Prima Donna and her faithfully loopy butler.

Norma wrote an enormous and ridiculous script that would be her 'return' to cinema but it needs the touches of a hack writer to clean it up. Joe needs cash and has no appointments on his social calendar. Slowly, Joe falls under the thumb of the melodramatic Norma. Every time he attempts to assert himself, she pulls him back in.

In the final analysis, everybody is a phoney. Everybody is trying to get something from somebody else. Except the hot Nancy Olson.

Here are a couple cool things: It is reveled that butler Max Von Mayerling is really Norma Desmond's first director. He is played by real life director Enrich von Stroheim. There is a scene (which I missed most of because my library DVD was, well, from the library) where he runs the projector for a screening of an old Norma Desmond film, which is in fact Queen Kelly, an old Gloria Swanson film that was directed by Stroheim! 1950 and Hollywood had turning it's critical eye onto itself!

Also, there is a scene where Joe, Norma, and a few friends play cards, which I missed most of because ... you know. Anyhow, the other card players were washed up has-been silent film stars Buster Keaton (a favorite of mine from my youth) and Anna Q. Nilsson.

There are a lot of other things to explore with this film (like, what's Jack Webb doing in the movie, and what's up with the dead monkey?) but I'll leave them to other people. I really enjoyed the movie. AMRU 4.

"She was the greatest of them all. You wouldn't know, you're too young. In one week she received 17,000 fan letters. Men bribed her hairdresser to get a lock of her hair. There was a maharajah who came all the way from India to beg one of her silk stockings. Later he strangled himself with it!"

Posted by Fred Theilig at 11:35 AM No comments:

Fat and 40 Mae West stars again as a sex pot that nobody can get enough of. Cary Grant is back as the man who falls for her. This time West is Tira, a circus worker with a problem. That problem is that her lug of an ex-boyfriend accidentally knocks off the poor sap she was trying to dig for gold. Turns out, actually, he was only MOSTLY dead, but still she needs to spend some serious cash on a good jew lawyer. She comes up with the idea of putting her head into the mouth of a lion. What horny depression dude wouldn't want to see a pudgy peroxide blond do that?

Grant falls for West, ex-beau gets in the way, romance on the rocks, court case, happy ending. There ya go, I'm no Angel in a nutshell.

Here are my observations after seeing two Mae West films: everyone who has ever done an over-the-top Mae West impression was just about dead on. While she wasn't a bad looking chick, her sex appeal shtick was just that: a gag. In both films there were secondary characters that were better looking. Also, her famous lines are hard to take seriously now because they are ubiquitous. It's hard to remember that they were fresh in their day.

In the end, it wasn't quite as enjoyable as She Done Him Wrong, but still fun. AMRU 3.0. 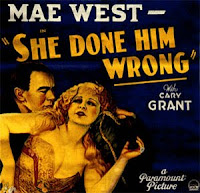 Mae West is Lady Lou, night club singer, 40 year old sex pot (ok, 39), and all around hoochie mamma. She has taken up with corrupt a politician (Noah Berry Sr.) who is able to lavish her with the lifestyle she desires. She has a violent boyfriend in jail that she promised to be faithful to and comes on to anyone who interests her.

Entering the scene is Captain Cummings (Cary Grant), who runs the salvation army style mission next door and would like to save the soul of everybody, Lady Lou included.

She Done Him Wrong is the film version of West's popular and bawdy stage play "Diamond Lil." Despite spending a lot of effort trying to tone it down, the film was still met with a fair amount of outrage. References to prostitution and loose morals are throughout.

My first impression was that this was a vehicle for one-liners. The movie is chuck full of them. West's famous "come up and see me sometime" makes it's first appearance, although not exactly in that format. Lady Lou, when told she is a great woman, says she's the best woman who ever walked the streets. It's loaded with this stuff.

Another interesting aspect is how the 1930's viewed 1890, when the film is set. The exasperated look on a street worker with a broom as he passes a horse. Quaint and old fashioned. Great fodder for depression era audiences.

A great virtue is how tight the story is. 64 minutes via Netflix online. West sing a couple songs that do not further the story. Cut them and the movie might be under 50 minutes. As it is, it's the shortest movie ever to be nominated for Best Picture. Definitely re-viewable, and I may do so. Right now, it's earns an AMRU of 3.5.

"Why don't you come up some time and see me."
"When women go wrong, men go right after them."
"There was a time when I didn't know where my next husband would come from."

Posted by Fred Theilig at 2:54 PM No comments:

Unlike most famous movies I hadn't seen, I was quite surprised to learn that I knew nothing of the plot. I knew the gay 1980's song, and that's about it. A story on NPR mentioned the film and a song sung by Claire Trevor and they said something about the setting. It was the last of four movies in the set loaned to me by a coworker and I finally finished the set.

Bogie is a drifter, a tough man who sticks his neck out for no one. Bacall is the young hottie. Lionel Barrymore is her father. Or father-in-law. Edward G. Robinson is the gangster trying to get back into the country. Who's going to stop him? Who? Nobody, that's who!

Gangsters, drifters, cripples, and hotties are all shut into a hotel when a hurricane passes. Is Bogart tough enough to stand up to the cruel Edward G? Will hottie Bacall fall for him? Are we seriously asking these questions?

What was interesting about the movie was Claire Trevor as Robinson's ex-hoochie mamma. She's a total lush at this point and a bit of an embarrassment. Her song was memorable, not for the singing itself, but for how it plays into the plot. Typical Bogart stuff, typical Bacall stuff. Enjoyable. AMRU 3.5.
Posted by Fred Theilig at 8:29 PM No comments:

Bogie and Bacall are back in the third of their four movies together. Today, Bogie is an escaped convict and Bacall is the rich young hottie that decides to help him out. She just knows he was framed.

For much of the beginning, we don't see Bogart's face. Most of it was filmed in POV mode and in other scenes he is in the shadows, which is all the better what with him on the lam and all. Agnes Moorehead plays Bacall's shrill friend.

Now that Bogie is on the outside, he wants to know who really killed his no good wife. A friendly cabbie introduces him to a plastic surgeon allowing Bogie to obscure his face with bandages for a while longer.

Every time the story progresses, something happens to put Bogie back into jeopardy, to the point I was surprised at the ending. Instead of a new obstacle or twist, the credits roll. Not a terribly realistic movie (so, Bogie looks that way AFTER surgery?) but that's easy enough to ignore. It was loaded with atmosphere and drama.

I liked it. Not a great movie, but good. And fun. I would consider seeing it again. AMRU 3.5.
Posted by Fred Theilig at 10:39 PM No comments: