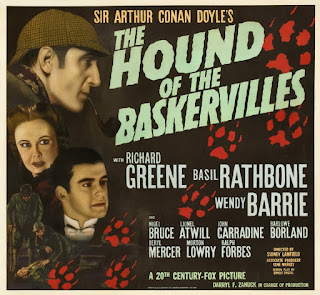 Young Henry (Richard Greene), heir to the Baskerville Estate, gets to move in early when uncle Charles dies of a heart attack. Or was he eaten by a phantom hound? No, it was a heart attack. Anyhow, Charlie’s good buddy Dr. Mortimer thinks the family is cursed (you now, by a hound) and young Henry’s life is in great danger. He goes to the legendary Sherlock Holmes (Basil Rathbone) for help.

Remember when I covered the 1959 Hammer version? You do? I don't, to be honest. That was almost seven years ago, and yes, I still haven’t read the source story. I may have gotten details wrong there, so hopefully I’ll do better here.

In a pre-Cumberpatch world, Holmes and Watson were synonymous with Rathbone and Nigel Bruce. (Remember Nigel from Suspicion?) The pair did fourteen Holmes films between 1939 and 1946. Impressed? Twelve were between 42 and 46, plus they even made an appearance in an unassociated comedy. Now THAT’S a production schedule! As such, their style and performances became the standard for all future versions.

The character of Watson (in a pre-Martin Freeman world) was that of a portly, somewhat pompous windbag. A complete foil to Holmes’ understated genius. That characterization comes from Nigel Bruce. The Watson from the stories was the admiring and frequently confounded narrator, not dissimilar to Freeman’s depiction.

Veteran studio hack John Carradine played the suspicious butler. This was just about when his career was taking off. That same year he’d appear in Stagecoach and eventually build a reputation in the world of horror. Also appearing is Lionel Atwill as the good Doctor. He too would spend time working the Universal horror circuit. Come to think of it, Basil himself also had a brief spell there.

The Baskerville estate lies, apparently, on a rocky asteroid, far from civilization but with unusually fast mail delivery. Anyhow, they hold dinner parties,  perform seances, and fall in love while waiting for the mythical hound-beast to eat them all. Or not. Hard to tell.

The Hound of the Baskervilles was a lot of fun. A better than fair mystery with great atmosphere, the kind Old Hollywood sometimes did well. There were red herrings and amusing moments, and a good time was had by all. Except those who died. The next one won't be too far off. AMRU 3.5.

Posted by Fred Theilig at 4:10 PM No comments:

In the summer, wives and children of the well to do escape the Manhattan heat for lakeside paradises, leaving husbands and fathers behind to behave like unsupervised delinquents. Richard Sherman (Tom Ewell) wants to be good, yes he does, but, you see, this hot blond (Marilyn Monroe) just moved upstairs, and you know …

Originally a play, the story revolved around a man’s affair when the wife is away. No, actual affairs just won’t do, says the Hays office. Instead of feeling guilty for having an affair, good old Sherman has to feel guilty about WANTING to have an affair. So Ewell plays the aging, dorky, ladies-man-wanna-be to Monroe’s ditzy sexpot confused why men react strangely to her baby-doll act. We, the audience, grin and pretend to be wiser.

For reasons that escape me, now that I’ve seen the film, I don't understand how Marilyn’s subway skirt scene became so iconic. It is shorter and less sexy than I expected, and, well that’s all I have to say about that. Hey, look! It’s Carolyn Jones, again in a tiny role. She played Morticia …. nevermind.

The production code turned a very provocative stage play into a somewhat confounding film. Billy Wilder and George Axelrod did their level best to create a viable comedy out of a redacted screenplay, but the end result is only mildly amusing and eminently dated. Compare this to Irma la Douce made seven years later also by Wilder (and originally was to star Monroe) after standards were loosened quite a bit. Neither were fantastic films, but Irma at least had sex appeal. In a very giggling-twelve-year-old sort of way, but still. I would be curious what a faithful adaptation would look like.

The Seven Year Itch isn't uninteresting, but it is somewhat strange (Sherman has fantasy conversations and narrates his own life). There is humor, but nothing to evoke an actual laugh. AMRU 3.


“Miss Morris, I'm perfectly capable of fixing my own breakfast. As a matter of fact, I had a peanut butter sandwich and two whiskey sours.”

Posted by Fred Theilig at 7:04 PM No comments: 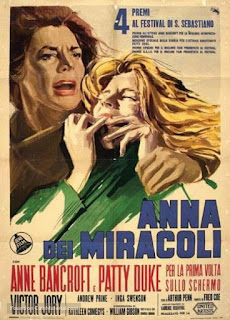 A baby girl (Patty Duke, eventually) loses her sight and hearing to an illness and becomes more and more unmanageable. Out of desperation her parents hire an unconventional carpetbagger (Anne Bancroft) to work a miracle, maybe.

This is the story of Helen Keller, the deaf, dumb, and blind kid from those witty and original jokes of my youth. The movie did not address whether or not she could play a mean pinball. My mother knew of Keller in her youth as a motivational speaker, so I guess she wasn’t actually dumb in either sense of the word. Back to the movie.

Here are some things that struck me: Fifteen year old (and victim of 2016) Patty Duke was tiny, no bigger than a child of eight. In adulthood she topped out at five foot nothing which aided in her portrayal as a much younger child. Playing a deaf and blind child can go oh so very wrong in oh so many ways, but Duke’s experience playing the character onstage payed off. Her performance felt amazingly authentic, without even a hint of camp.

The Miracle Worker was a very low budget production. With a budget of half a million (chicken feed even by 1962 standards), it shows in the titling, score, and film grain quality. This did not hurt the story, in fact a more Hollywood polished product may have detracted. The task at hand did not need to be romanticized.

Helen’s mom was played by none other than Inga Swenson, better known to me as Ingrid Swenson from Soap and to a lesser extent Gretchen from Benson. She didn’t play a very endearing character on television and it was surprising to see her all young and hot, and with an accomplished southern belle accent.

This fascinating character study and battle of wills has only the power of the acting performances going for it, but power it has in spades. Helen’s behavior and the events ring very true, although it did look silly sometimes when she would push Anne Sullivan and she’d go flying. Still, even though it’s fifty five years old, I’d recommend it to anyone dealing with a less than compliant child. AMRU 3.5.


“Mrs. Keller, I don't think Helen's greatest handicap is deafness or blindness. I think it's your love and pity. All these years you've felt so sorry for her you've kept her like a pet. Well, even a dog you housebreak.”

Posted by Fred Theilig at 10:05 PM No comments: