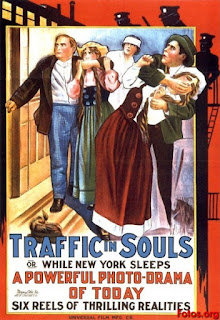 A criminal gang, led by a respected philanthropist, tricks young women into a life of degradation. The sister of a victim and the police save the day.

Here is the granddaddy of exploitation films, the first American film to deal with sexuality. White women of virtue being forced into a life of sin! Something must be done of it! Here starts the tradition of decrying a terrible evil all the while tantalizing the audience with it. Not bad work if you can get it.

Not a lot to say about this one. It was a smash success, made tons of money for Universal, and had a Broadway opening. Historically interesting, but something of a snoozer. The sets were framed like a stage play and the title cards mostly described the action rather than depicting dialog. There were interesting scenes where the criminals used hidden microphones and stuff, but still a little clumsy, even by 1913 standards. AMRU 2.5.
Posted by Fred Theilig at 10:03 PM No comments: 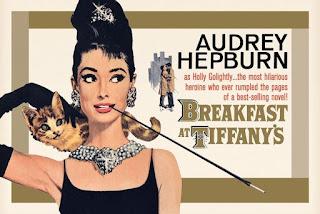 Here is a story of two damaged people getting involved with each other. Neither know where they are going, or really where they are. Holly lives "paycheck" to "paycheck" with strange arrangements dating older men. And visiting mob bosses in jail. Apparently she was a prostitute but the movie makes this unclear. Peppard's Paul is both supported and stifled by his relationship with Neal, was well as his own indirection. Holly is a breath of fresh air, but also a disturbing element of chaos in his life.

Neal's "much older woman" was only three years older than Hepburn. Ten years earlier she shined in The Day The Earth Stood Still. The Golightly character, according to the source material, was supposed to be 19, which would give a real pervy vibe to 33 year old Peppard. Wait, Truman Capote wanted Marilyn Monroe to star? That wouldn't have worked!

Hey, Alan Reed (you know, Fred!) is here in the flesh. Buddy Ebsen, in his early fifties, was looking to retire after this movie. Instead he ended up doing nine seasons of The Beverly Hillbillies and eight more of Barnaby Jones. He was north of 90 when he did an episode of King of the Hill. Side fact: he played Barnaby Jones in the terrible Beverly Hillbillies movie.

Breakfast at Tiffany's is a wonderfully shot, acted, and scripted film. It's looks and sounds charming,while being biting social commentary of the day. The city is gorgeous, Hepburn is absolutely charming, and it's slow burn pacing is just about perfect. It isn't without faults however. Most notably is Mickey Rooney's destruction of Japanese dignity. Also, I didn't care for the tacked on Hollywood ending, but I suppose most people didn't mind. AMRU 4.5.


"I've got a wonderful idea. We can spend the whole day doing things we've never done before. We'll take turns. Something you've never done, then me. Course I can't really think of anything I've never done."

Posted by Fred Theilig at 3:36 PM No comments: 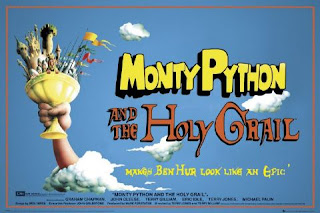 The Monty Python comedy troupe do a series of interconnected sketches surrounding King Arthur's quest for the Holy Grail. They poke fun of medieval life as subtle commentary on modern life. They forgot to write an ending.

Monty Python and the Holy Grail is one of those films. If you love it, then you love it. It's iconic within its target audience and arguably the most quotable film of all time. It's silly, clumsy, fun, flawed, but the thing that stands out is how every sketch stands up. No soft spots in the bunch.

Here are things you may not know: the face of god was that of a 19th century cricket player. The chain armor was actually wool and the cast was miserably cold during the shoot. The Enchanter's name was Tim because John Cleese forgot his line. The Terry's Jones and Gilliam directed because nobody else wanted to. They didn't get along.

It's the kind of film I should watch once a year. It's been in my personal library for years. AMRU 5.
Posted by Fred Theilig at 10:33 PM No comments: 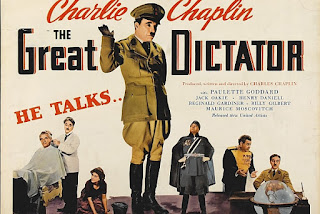 A Jewish barber (Charlie Chaplin) recovers from injuries sustained in a old war to find himself oppressed on the foothills of a new one.

Calling this a thinly veiled take on Hitler isn't quite accurate. Chaplin's Adenoid Hynkel is, directly, Hitler by another name. Just as Napaloni (Dictator of Bacteria) is exactly Musolini. Garbitsch was Joseph Goebbels, and Herring was Hermann Goering.

Chaplin's first proper talkie (his earlier works were sound films, but performed in pantomime), The Great Dictator is both a slapstick comedy and melodrama. The slapstick parts are amusing and quite interesting. We see remnants of the tramp character (retired with Modern Times) as well as notes of the Marx Brothers and Stooges, the big difference being that Chaplin's character is polite and understated.

The change in tone from slapstick to melodrama was jarringly abrupt, making me wonder if Chaplin was undecided which path to take. But when Nazi expansion in Europe is a current event, goofy is a hard sell.

Hollywood did not want this film made and Chaplin had to finance it himself. Why anger a ruthless dictator by calling him out for what he was? Also, the Jewish studio moguls didn't want to call attention to their Jewishness. Considering the climate at the time, this was a very brave act dared by few.

The Great Dictator is a well made, sometimes funny, but important film. It is quoted and referenced more often than you may think. It came out a full year before To Be or Not To Be, which I may give a slight edge to (it certainly balanced the humor element better). and was beat by the Stooge short You Nazty Spy! by less than two months. Consider the years this production required compared to the super tight schedule of a Stooge short.

Chaplin was disappointed that his movie didn't get more respect at the academy awards, nominated five times with no wins. But it could be worse. His hot wife could leave him and marry the Penguin. AMRU 4.

In lieu of a quote, I leave you with a modified version of Chaplin's speech at the finale. Maybe it's a bit of a spoiler, but it's truly inspiring, especially in light of recent events.

Posted by Fred Theilig at 11:42 PM No comments: