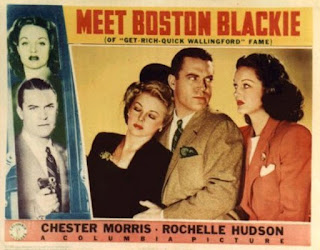 Reformed jewel thief Boston Blackie (whitey Chester Morris) returns from abroad and is under close watch by Inspector Faraday who would love to pin a pearl heist on him. He tries to catch the eye of a pretty blonde by defending her from a rude man. Later that rude man turns up dead in Blackie’s cabin and he now has to solve the mystery to clear his name.

Smarmy and wise cracking, Blackie is helped by his trusty servant “the runt” without any explanation why. Much of the story revolves around a carnival, because why not. Pretty blond vaguely outlines part of the drama he stepped into in the tunnel of love. Will love last? Hey, here’s Schlitze! Old friends will remember him from Freaks (1932). Here he plays a pinhead.

Meet Boston Blackie is a paper-thin mystery with cheesy-ass dialog. But it’s short run time (61 minutes) and upbeat tone made for a pleasant watch. They did fourteen of these things in nine years and I’ll see at least one more. Thin Man it’s not, but enjoyable nevertheless. AMRU 3.5.


“We’ve got Faraday in a cage for you. Just like a canary. Come on, maybe he’ll sing for us.”

Posted by Fred Theilig at 10:32 AM No comments: