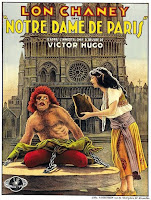 Quasimodo is ugly, Esmeralda is hot, the archdeacon's brother is evil, Quasi is told to kidnap the gypsy, gets punished, gypsy chick shows him kindness, class struggle, Sanctuary, Sanctuary, nobody ever asks for whom the bell tolls. Roll credits.

The term "Silent Epic" doesn't totally stir in me what it might, but I'm a complete Lon Chaney junkie, and this was the first film he had a major influence in creating. He suggested the story and had a hand in casting. His makeup was state of the art and the scale grand. Still, bit of a snooze-fest.

Wow, am I done? There must be more to say. Little disappointed that there wasn't more Chaney in it. He reveled in the unrequited love theme and it's in there, but not highlighted. The archdeacon was a good guy in the movie because the studios didn't want a clerical villain. Apparently he was evil in the book. Don't really know. Victor Hugo wasn't on my summer reading list.

So, that's it. AMRU 3. Not bad. Would be nice if a quality copy was found. The surviving copy is real rough and has about fifteen minutes missing. It was the first Hollywood version and it would take 79 years and Disney to do a sequel. Bad idea. And knowing people who experienced Gypsies when living in Europe, Hollywood totally white-washed their reputation. I wonder how the 1939 version is ...
Posted by Fred Theilig at 12:59 PM No comments: 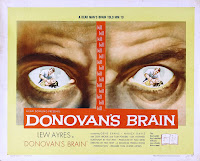 A dorky doctor (Lew Ayres) and his homely wife (Nancy Davis), along with his alcoholic friend, do experiments on monkey brains for the betterment of man. When a plane crashes nearby, Doc is pressed into triage duty. The lone survivor is brought to his home where despite their great efforts, he is declared dead. Dead, but not Brain Dead.

Stealing and experimenting on human brains is quite illegal so they'll need to cover their tracks carefully. But before they begin, there's no harm in allowing a reporter take pictures in his laboratory.

Doc hooks up a speaker to his equipment so that he can monitor the brain's health from the comfort of the living room. Inventing a telepathy device is the next logical step. Good thing this brain isn't that of an evil millionaire who would use his evil brain powers to take over peoples minds to do his evil brain bidding! Yea, that would be terrible.

Secretly, I found myself enjoying this movie. Because of the amazing story? The eerie atmosphere? State of the art special effects? Uhhh no. Ayres transformation from dorky doc to ruthless millionaire was rather good. Not exactly Academy recognition level, but it does rise above the rest of the film.

One of my reasons for watching this movie was because it stared Nancy Davis, aka Nancy Reagan. To look at her now, you would be quite surprised to learn that in her youth she was quite unattractive. In fact, when other characters called her attractive, it stretched credibility. Even for an evil brain movie.

Well, anyhow, typical 50's B-movie science fiction stuff follows and it's not all bad. This here is the second of three movies based directly on the 1942 Curt Siodmak novel, not including several other works that draw on it's influence (including a Star Trek episode). So maybe Donovan's brain isn't dead. Not dead, but brain dead? You decide. AMRU 3.

Posted by Fred Theilig at 11:43 PM No comments: 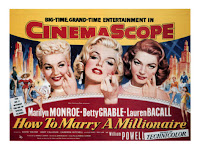 They scam their way into an apartment, try to snare rich men, end up falling in love. Do they find true love? Will they learn valuable lessons in the process? Who cares. Marilyn was hot.

After the low quality schlock I've been seeing lately, I was longing for some high quality schlock. Total Hollywood bauble production value. This fits the bill. Big names, clever dialog, great sets. Kinda throw-away story, but fun. AMRU 3.5, now lets get on with the Grable.

Heard of her. My son (WWII obsessed) knew her name. Didn't know anything about her. Here, she was getting a little long in the tooth (mid-thirties) but still appealing. She showed off her legs once or twice, for what that's worth. She was, however, the most forgettable of the three ladies. Lauren, playing the older, wizened leader of the group, was the central character. It's her game we revolve around. It's her who woos big star William Powell. Being the best actress of the group (by more than a length) this makes sense. Young starlet Monroe, however, totally charmed. Nobody played hot, stupid, and blond like her.

So, what we have here is Hollywood doing well what Hollywood does well. If this kind of movie appeals to you, then this movie will appeal to you. It does to me, in certain doses.


"We'd better put a check on that one. Nobody's mother lives in Atlantic City on Saturday."

Posted by Fred Theilig at 7:12 PM No comments: