Foxy Brown (Pam Grier) is a whole lotta woman. Her boyfriend is a cop who infiltrated the ghetto mob and they are out for revenge. To protect himself, he undergoes plastic surgery. Unfortunately, her ne'er-do-well brother, on the run from the same mob, recognizes him and trades his life for some debt forgiveness. Exit boyfriend. This don't go over well with o'll Foxy. She's a whole lotta woman. Foxy goes undercover in the mob's prostitution ring and, well, things play out mostly as you can expect.

What a terrible film! I occasionally hit the exploitation scene and I don't know why. The stories are formulaic, the acting is terrible, even the fight sequences are badly filmed. The only saving grace is the nudity, and Foxy Brown has fairly little. But the movie does redeem itself somewhat. The climax is clever and satisfying. I also liked the element of the boss man being a woman, with a boy-toy who clearly sees his relationship with her as part of the job. Does that save the film as a whole? I'm not so sure.

The titular character has become a pop culture icon. Is she not the archetype for Beyonce's Foxxy Cleopatra character in Goldmember? She is not the passive heroine so common in this kind of film. Foxy goes right after the bad guys and does not flinch. She takes her share of punishment and dishes out a whole lot more. In truth I can see why people become fascinated by these movies, but don't mistake them for fine filmmaking. It stands squarely in the guilty pleasure zone. That said, for me it's more guilt than pleasure. AMRU 2.5.


"That's my sister, baby, and she's a whole lotta woman."

Posted by Fred Theilig at 2:00 PM No comments: 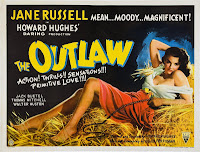 Sheriff Pat Garrett (Thomas Mitchell) learns that the infamous Doc Holliday (Walter Huston) is in town. Rather than being concerned, he's elated because the Doc is his bestus buddy ever. They have a grand reunion and Doc mentions that someone stole his favorite horse. Turns out that both horse and thief are also in town, and the man holding the reins is none other than Billy the Kid (Jack Buetel).

Well, Doc takes a liking to the kid and takes his side in a dispute with Pat. This puts Doc and Pat's friendship on the rocks and things get worse when the Kid kills a man (in self defense, of course). The drama thickens when the kid then takes a liking to Doc's best girl Rio (Jane Russell).

First off, ewww. Jane was barley twenty and Huston was pushing 60 when the film was made. Jane earned the part because director Howard Hughes needed a rack on display in the background during boring scenes. The mamarous cinematography was so blatant that censors held up the film's release for two years. When it finally came out it was a big tit. I mean hit. That's what I meant.

Now, a history lesson. Pat Garrett killed Billy the Kid. There is speculation about that event that plays out here. What doesn't compute is the presents of Doc Holliday. Doc was contemporaneous to Pat and the Kid, but in real life their story lines do not cross.

The principle subtext in this story is the love triangle between Doc, the Kid, and Rio. That's the triangle the audience is supposed to get. Further, it has been rumored that Hughes had a thing for both Russel and Buetel. The deeper subtext, however, is the love triangle between Doc, the Kid, and Pat. Pat totally played like a spurned lover. There are a couple "what the hell is going on here" moments. Now prepare yourself for an even more bizarre love triangle: Doc, Kid, and the horse. Seriously. They both has more interest in the horse than Rio. It even had a three letter name like everyone else: Red.

But let's move back to Jane's funbags, shall we? In many scenes they were so conspicuously featured it was laughable. Riding away from those terrible injuns, the men ride mostly upright while Rio is bent way over with the camera pointed down the barrel of her guns. There is a scene where Doc and the Kid sit and chat, while Rio walks back and forth, her head out of the shot, and her jugs slide from corner to corner.

The Outlaw is a fairly terrible film. The acting was bizarre when not outright bad. The story was almost inconsequential. Here is a very unconventional western that could have been made in any setting. The famous cowboys angle might have made it an easier sale to 1940's audiences, but that was never the main selling point. Having said that, it did hold my interest. While I am open to the idea of seeing it again, I feel compelled to restrict my rating to 3.

Posted by Fred Theilig at 11:47 PM No comments: 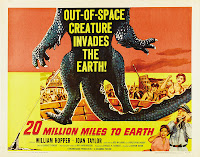 Astronauts land 20 Million Miles (from) Earth on a distant, primitive planet called Sicily. Two men are pulled from the rocket by Mario and Luigi who exclaim "What a spicey meat-a-ball!" while a small-a boy sells a cylinder of space goo to a professor so he can buy a cow-boy hat from-a the Texas ...

Ok, enough with the terrible, over-the-top accent. I've never been to the Sicily so I don't-a know if they talk-a that way there, but I'll say it got fairly irritating here. Now, back to our show.

When the professor's hot daughter returns from a day of treating an injured American astronauts she is greeted by a little green lizard friend wandering about (hint: it hatched from the goo). Prof and daughter cage the beastie but come morning it's grown three times it's size. Before they can bring it to the University, it escapes and starts menacing the countryside.

Captain Hero Astronaut Man (William Hopper) wants it captured alive, but the local authorities no like-a the plan very much. As the monster continues to grow, they become desperate.

Not a bad flick. Very King Kong-esque, although not nearly as good. What may have been better was old pal's Harryhausen's work. The nuance in the movement of our Venus creature was quite remarkable. Also remarkable to note that there was a lot of his footage. It was shot in Italy because Ray wanted to visit but couldn't afford the trip himself.


"Why is it always, always so costly for Man to move from the present to the future?"

Posted by Fred Theilig at 10:00 PM No comments: