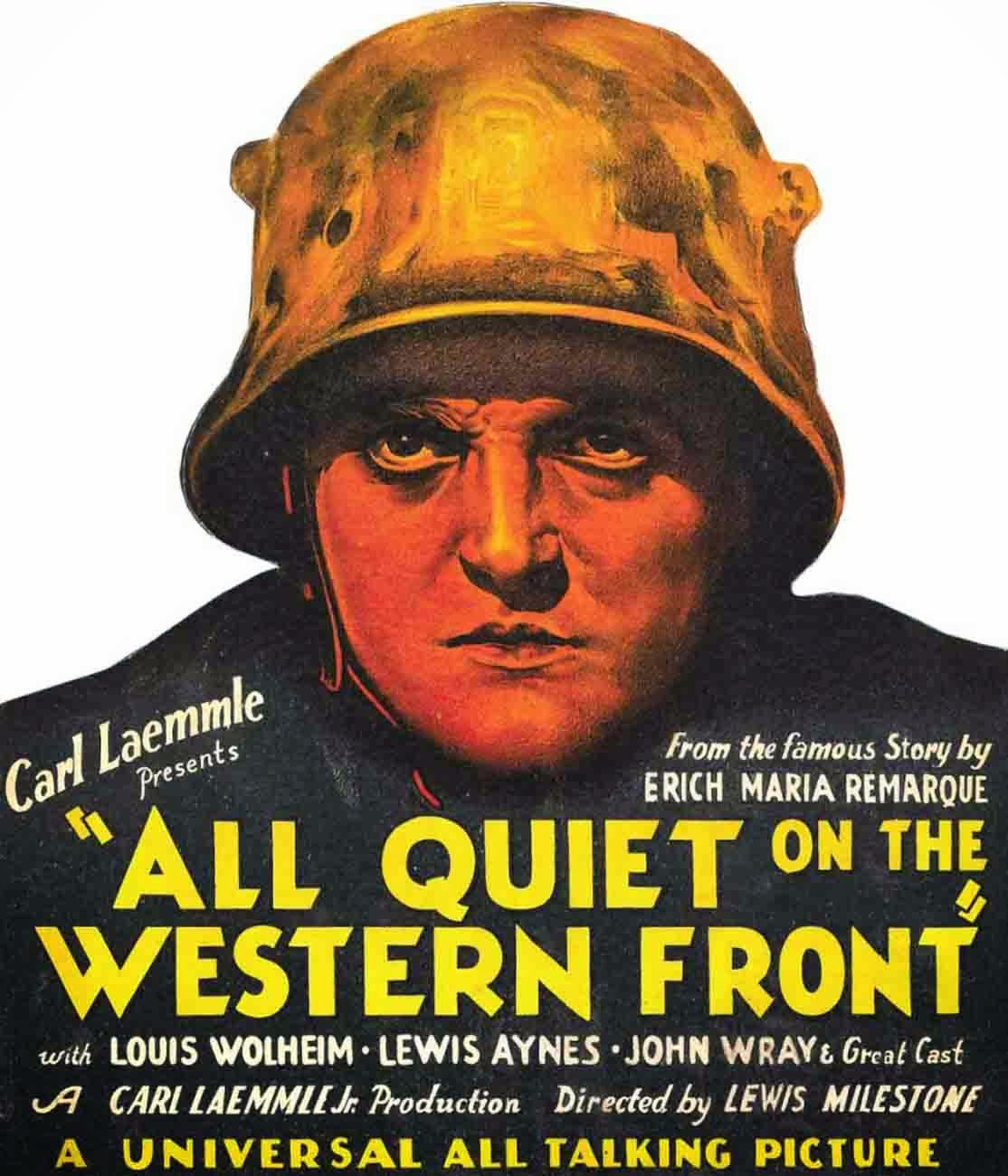 Young German students are urged to enlist for honor and glory, then find out the true meaning of trench warfare.

I had not seriously considered this movie because I mistakenly presumed it was either German with subtitles or, even worse, silent. I also thought it was very long. TCM aired it recently and because it sparked an interest with my 17 year old anti-war military buff son, we watched it together. It's 2 hours fifteenish run time was reasonable for this short-attention-span viewer.

I expect modern HD movies to wow me away visually, what with their CGI and other tricks, but this low-def, 4:3 aspect, black and white movie was impressive. Now when a crane shot spins 360 around someones head, goes up their butt crack, then pans back into outer space, we know a fat guy on a million dollar computer worked the weekend. Here, when soldiers march out of a building that then explodes, we know that the friggin' building the actors walked out of friggin' blew up! This added touch of reality makes all the difference.

The principle message of this story is that nobody wants war, nobody needs it, and the empty headed motormouths back home spouting patriotic clap-trap need to spend an evening stringing barbed wire during a down pour while the enemy strafed them with gunfire. And that message was delivered crystal.

Being an early talkie (the first sound Best Picture winner), the acting styles were clearly influenced by the pantomime era. As such, it is easy to typify the acting as terrible. Mostly because much of it was ... terrible. But these were style choices of the time and later in the film there are nuanced scenes and quiet transformations that are quite remarkable. When the main character goes home on leave and hears the bravado from his father and others in a bar, the restraint in Lew Ayres' performance was wonderful.

The gruff but lovable Sargent Kat (Louis Wolheim) would die a year later from stomach cancer. Uncredited student Arthur Gardner who went on to fame as a TV producer, is a hundred and three. The director looked around the Los Angeles area for real German war veterans to insure uniform and tactic accuracy and found so many he hired some as extras.

The anti-war message was preaching to the choir in my household, but it was a fantastic film. Had it a clearer soundtrack it's impact might even be greater. It's unflinching look at the realities of war, pre-code gore, and surprising performances make this a triumph. AMRU 4.


"I think it's more a kind of fever. Nobody wants it in particular, and then all at once, there it is. We didn't want it. The English didn't want it. And here we are fighting."

Posted by Fred Theilig at 9:25 PM No comments:

The tiny and impoverished nation of Fenwick declares war on America in order to lose and reap the benefit of war reparations. When they happen upon the only working prototype of the Q-Bomb (way more powerful than that wimpy H-Bomb), they accidentally win.

The real story here is Peter Sellers playing three rolls. The surprising thing is that he played them rather well. The ditsy Grand Duchess, the conniving prime minister, and the simple and good-hearted Tully Bascombe. Each character very different and well developed. This is his first foray into multiple screen personae (he was emulating Alec Guinness), and would make it something of a trademark. His real talent, in my opinion, was doing nuanced yet over the top characters in virtually every role. Sometimes very understated, sometimes Clouseau. He was a troubled comic genius whos art was built for longevity, if not his lifestyle.

Anything else of interest? Cutie Jean Seberg would take her own life twenty years later. Or was murdered by Nazi ninja alien bigfoots. The jury is still out on that one. She lived a life of drug abuse and infidelity. That's all I got this time. Amusing and well made, but no real LOL moments. Worth the time spent watching. AMRU 3. They made a sequel, but without Sellers, is it really worth watching?


"I warn you, madam - I know the entire Geneva Convention by heart!"
"Oh, how nice! You must recite it for me some evening; I play the harpsichord."

Posted by Fred Theilig at 9:18 PM No comments: