A wealthy man dies and the search for an heir turns up eccentric small town man, Longfellow Deeds (Gary Cooper). Unfamiliar to big city ways, he is taken in by reporter Babe Bennett (Jean Arthur), wise in the ways of city life, and becomes the target of the popular press and those who get rich handling rich people’s money. When his folksy home-spun wisdom interferes with their plans, they use the bad press to question his sanity.

Jean Arthur could have been a bigger star. She was the female lead in plenty of pictures, some of them good, and was liked by her directors, but she never rose to A level stardom. Maybe because she was slightly older than her female contemporaries, hitting the big 3-0 when talkies became standard. Maybe she just managed to miss that one big roll. She turned down the Donna Reed roll in It’s a Wonderful Life because she didn’t want to work with Jimmy Stewart again. She retired fairly young. Her Columbia contract ended when she was 44 and she appeared in only two more films. Whatever the reason, she was always charming in the films I’ve seen, even the one I don’t care for much.

Here also is character actor Lionel Stander. His voice and looks are very distinctive and I remembered him as Max from Cheesy TV Hart to Hart four decades later. I noticed something Cooper would do. He’d make quirky facial expressions from time to time. I also Harrison Ford from Raiders doing something similar. I found it peculiar.

Here is Frank Capra at his Capriest. Pretty standard Rom Com format. I wasn’t charmed this time around. The principal reason was I didn’t find Deeds all that likeable. He was rude, quick to fight, and acted like a buffoon. Normally a Rom Com’s success relies solely on the chemistry of the two loves, and little else. Here, Deeds likability interferes. Overall not too bad, but (and I will say this again), it was too long. Fifteen minutes shorter would have been fifteen minutes better. AMRU 3.


“When the servant comes in, Mr. Hallor, I'm going to ask him to show you to the door. Many people don't know where it is.”

Posted by Fred Theilig at 6:03 PM No comments: 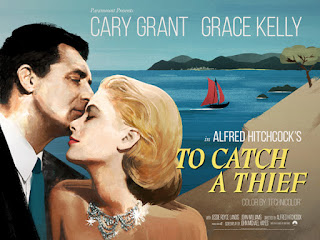 Reformed cat burglar John Robie (Cary Grant) is under suspicion when jewels go missing in a manner identical to his old M.O. Rather than cooperate with the police and provide an alibi, like a crazy person, he goes on the lam and tries to expose the real burglar. He convinces an insurance agent (John Williams) to hand over private details of clients with insured valuable jewels, you know, for research. Sign me up for that insurance company.

The real mystery here is, is Robie the Robber, and if not, who is? It could be just about nobody. Back story: Robie was convicted, served in the French underground during the war, and became a hero. He doesn’t want new allegations to besmirch his name and risk his lucrative career of living in a luxurious villa on the French Riviera and doing nothing. His first victim … I mean, research participant is a his mom from North by Northwest and her hot hot hot hot way-too-young-for-him daughter (Grace Kelly). Guess which one he falls in love with.

John Williams (no relationship to John Williams) was an interesting man. Basically he played only formal British types, but he did it well. He didn’t appear an huge number of films (27 not including TV, uncredited, and shorts) but they included Dial M for Murder (1954), Witness for the Prosecution (1957), Sabrina (1954), and this, just to name a few. A favorite of Hitchcock, he also did ten episodes of Alfred Hitchcock Presents.

Grant had decided to retire, annoyed by the growing popularity of method acting. He was lured back to play the elderly love interest to Kelly, who had a reputation of having a reputation. He would continue to play the dashing young man well into his 60's. Grace would film on a stretch of road she would die on twenty eight years later. So it goes.

A teensy bit sloppy by Hitchcock standards. There is a scene early on between Grant and a French man who was clearly not saying anything actually heard by audience. More than simply taking me out of the story, I found it klunky and confusing. Thankfully he didn’t prove to be a major character. Overall it was a good, if not up to its reputation. AMRU 3.5.


“A child? Shall we stand in shallower water and discuss that?”

Posted by Fred Theilig at 10:46 PM No comments: 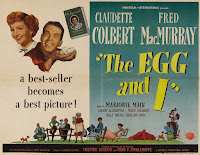 On her wedding night Betty (Claudette Colbert) discovers her urban professional husband (Fred MacMurray) has quit his job and bought a chicken farm. Adjusting to the rustic lifestyle is difficult and fraught with challenges.

This Fish Out Of Water story, based on but not closely resembling a memoir by Betty MacDonald, inspired a short lived TV series, ten Ma & Pa Kettle movies, and Green Acres which I watched in syndication. It is anecdotal in nature, moving from one minor catastrophe to another. The movie was a success but its real legacy are the Kettle’s, our Ozarkian noble savages.

Maybe you will recall Billy (big as a) House from Bedlam. Yea, I know, fat shaming. Here is plays an annoying travelling salesman. He was replaced in the Kettle films with Emory Parnell. Richard Long looked much younger than he would just two years later. You may remember him in Big Valley, or as the Professor in The Nanny And. He would die before reaching my great age.

Competently made, predictable comedy, and kinda boring. Not much else to say here. It didn’t hurt to watch and everything made sense (with the possible exception of the ending), but fairly unspectacular. My mom enjoyed the Kettle films in her youth but we both agreed that there were few laughs to be found here. AMRU 3.

Posted by Fred Theilig at 12:34 AM No comments:

Irena (Nastassja Kinski) comes to New Orleans to stay with her creepy brother Paul (Malcolm McDowell). He disappears for a few days and she manages to get herself a job at the zoo, mostly because the curator has the hots for her, and why not. The curator is also dealing with a leopard that unexpectedly showed up in town mauling people.

I requested this from the library intending on rewatching the 1942 classic. Instead, I received the 1982 remake and decided to give it a try. Wow, what a stinker. Poor camera work, sloppy editing, terrible script, and bad acting. And the score is among the worst I’ve ever heard. The whole production seems to have a crappy-as-an-artistic-statement appeal that simply did not work.

This film offers a passing resemblance with the Val Lewton classic. Irena from the original was from a mysterious eastern European village that was somehow cursed. Nastassja’s Irena came from a bizarro dessert on the Dune planet where leopards became human by eating sacrificial children, because, you know, science. If they have sex, they revert to animal form and must kill to become human again. That’s kind of a spoiler, but trust me. The film makes much more sense knowing that up front. Also, the incestuous brother angle was all new. Delightful.

Also, the pool scene (Lewton bus included) was ripped straight from the original, presented after the credits should have rolled. Cute Annette O’Toole played Alice the love rival.

Don’t get me wrong. Nastassja Kinski looked fantastic. I cannot emphasize this enough. O'Toole as well. But that's the only thing keeping this movie from a lower score. The only other thing this film has going for it is style, such as it is. Maybe it was trying for a french new wave vibe. The story wasn’t much and the acting and dialog were mind-numbingly terrible. Again, as if it was intentional. AMRU 2.

Posted by Fred Theilig at 2:51 PM No comments: 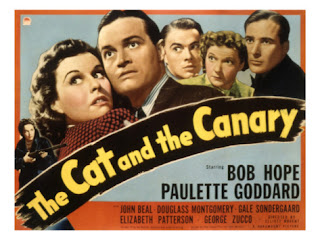 Per instructions, a rich man’s last will and testament is to be read in his spooky old mansion, at midnight, ten years after he died. Standard operating procedures, really. The will states that if the sole heir dies or is proven crazy within 30 days, the estate will go to a person named in a second envelope. Also, pretty boilerplate. After the hot, hot heir is named, everyone is forced to stay the night. Oh yea, and there might be a deranged murderer on the loose.

Taken from the same source as the silent classic (as were a couple others), this version was reformulated to showcase budding starlet and Chaplin main squeeze Paulette Goddard, and Bob Hope. It’s success prompted the studio to star the same pair in another comic horror The Ghost Breakers, rushed to theaters just seven months later. Despite how that sounds, that feature was also successful.

The tropes so associated with haunted house movies are in full force here. Secret passages, scary hands from behind things, real eyes watching from paintings, plus all that stuff described in the premise. This all may have been invented either by the source play or the silent version.

Hope was witty, Goddard was charming, and the story holds up. At it’s heart it is a comedy, but it is still faithful to the horror genre: a plausible element of the supernatural and a sense of fear for both the characters and audience. Amusing, interesting, creepy to a point, and an enjoyable watch. AMRU 3.5. The 'cat' was the escaped lunatic.


Cicily: Don't big empty houses scare you?
Wally Campbell: Not me, I used to be in vaudeville.

Posted by Fred Theilig at 7:53 PM No comments: