Clumsy and awkward, even Hitch himself said it was the work of a talented amateur. The 1956 remake is much more polished and Hollywood-ized causing many to prefer the original. You’ll hear my opinion after I see the remake. And you read it out loud. Because, you know, voices. Like many films that fall into the public domain, the audio and video quality suffers. I turned the sound all the way up and tolerated the pop and hisses. Also, I had some difficulty following which character was which. It became easier once that person was shot. Oh, spoiler alert.

The story, in a nutshell, is a family is on vacation and befriend a man who turns out to be a spy. He is shot and quickly tells mom about some super secret information in his hotel room. Dad finds it but British intelligence and bad guys are wise. M5 pressures mom and dad to give up the info but they won’t because the baddies have kidnapped their annoying little girl. So, Dad becomes an amateur sleuth to save the day.

Man, a little over the top with the British politeness thing. Lot’s of “Terribly Sorry” and “Not quite”’s of pre-WWII England. Not a mystery, exactly, because we pretty much know who the bad guys are. We don’t know their plan, but I must admit I’m not sure I recall what it was even now. This was Peter Lorre’s first English speaking role. When he met with Hitch he smiled and nodded through the meeting because he didn’t understand English. He learned his lines phonetically.

When comparing this film with his own 1956 remake he said this was “the work of a talented amateur and the second was made by a professional." Clearly rough but somewhat charming and definitely British, the second was a Hollywood production through and through. The Man Who Knew Too Much was likable but forgettable and sometimes hard to follow. Unless you find a copy of a fully restored version, consider skipping it. AMRU 2.5.
Posted by Fred Theilig at 11:54 PM No comments: 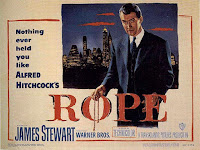 Two college friends, Brandon and Philip, kill a third because they feel he is inferior. It seems they had an old prep school headmaster (James Stewart) that put it into their heads that the rich elite have the right to do this. Then they invite said headmaster, dead David’s fiance and family, and others to an awkward dinner party to prove how clever they are. Turns out, not so clever.

Rope was an experiment for Hitchcock. Could he make the movie appear as if it was done in one 80 minute take? Turns out, he could. The cameras could hold just over ten minutes of film, so the movie is made up of ten takes between four and a half and ten minutes and carefully spliced together, the joints cleverly camouflaged. See Birdman. As the source material was a stage play and the dialog and acting style reflects this. After getting used to it, the movie flows rather well. But seriously, see Birdman.

Stewart was cast against type, being a sardonic academic with a suspicious mind. This bothered him, this being the era when actors complained about NOT being typecast. Joan Chandler was adorable as the dead boy’s best girl. Philip’s Farley Granger would later play a tennis pro in Strangers on a Train. Criss cross.

Hitch later dismissed his film as a stunt. He would cement his reputation for building tension using editing (see Psycho), and here he essentially didn’t edit at all. As each take was several minutes in length, any mistake or problem meant the whole piece had to be reshot. This makes for an exhausting and tense shoot. But seriously, see Psycho.

The movie was met with some controversy, not because of the murder, but because Philip and Brandon were totally gay! Not overtly, of course, but they totally were! Hitchcock always put together a complete, entertaining film. Not a masterpiece, but Rope is a very interesting watch. The ending was rather abrupt, and the side stories didn’t go anywhere, but definitely an entertaining watch. AMRU 3.5.


“You're quite a good chicken strangler as I recall.”

Posted by Fred Theilig at 7:30 PM No comments: