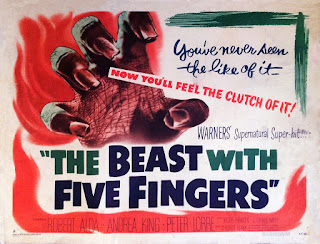 A crippled pianist is murdered after it is learned that his will was changed so that his nurse will inherit the bulk of his estate. As the will is being contested, it appears his disembodied hand is trying to kill again.

Creepy mansion? Check. Old time setting? Check. References to the occult? Check. The Beast with Five Fingers takes itself fairly seriously, even if its audience doesn’t. It’s a fairly atmospheric throw-away horror film that successfully gets the viewer an hour and a half older in a not unpleasant manner. The filmmakers wanted Paul Henreid (Casablanca) for a key role, but he wisely declined. Sources disagree what role he was to play but IMdB says Peter Lorre but I'm guessing it was the Robert Alda part.

Not too much to say. Some mystery, a love triangle, decent special effects for the day, and good atmosphere. Just don’t expect to be wow’d. AMRU 3.
Posted by Fred Theilig at 7:58 PM No comments: 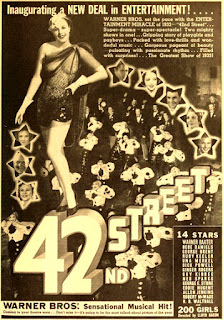 Tried and overworked stage director Julian (Warner Baxter) decides, against his doctor’s recommendation, to produce one final show. It is financed by a creepy old rich Guy (Kibbee) on condition that the lead is given to the girl (Bebe Daniels), who has also agreed to touch his wiener for the honor. This is pre-code, mind you. Comedic mayhem ensues.

When sound movies became a thing, studios crammed as many musicals into theaters as possible, regardless of quality. By 1933, the genre was declared dead. Never-the-less, financially struggling Warner Brothers decided to produce 42nd Street, and it turned out to be a critical and financial success. Lucky thing for the Bro’s.

42nd Street resolves around the drama of getting the show on and the complication of our lead, her sugar daddy, and her actual boyfriend. It also featured ingenue Ruby Keeler and Dick Powell in their first pairing. They would go on to star together in a string of light-hearted musical romantic comedies, like Gold Diggers of 1933. Dick would have a fairly long (57 feature films) Hollywood career and fairly short life (58 years). Ruby the opposite (14ish films, 83 years).

Charming, amusing, and risque for its day, 42nd street is well worth watching. Ginger Rogers is charmingly amusing in a fairly small role. This is just prior to her pairing with Fred Astaire. AMRU 3.5.

Read more »
Posted by Fred Theilig at 9:04 PM No comments:

Early in 2016 it occurred to me that I should be watching movies with my mom. My dad passed away just over a year prior and I wanted to keep her company. And she, unlike most people in my life, really liked old films. I bought her a blu-ray player and arrived almost every Friday with movie and dinner in hand. This became my favorite ritual. I wish I started a year earlier.

I focused on movies I thought she would like. She had no interest in westerns and war films. Horror was ok so long as they weren’t violent. But mostly she loved mysteries, especially Hitchcock and Sherlock Holmes. We watched many movies new to me and I had the opportunity to introduce her to films I loved. I treasure those times.

On December 30, sometime before noon, Lymphoma finally took my mother. In the almost four years since her (and my father’s) diagnosis, death has been a constant companion. We all know that the time we get is all we ever have, but we kid ourselves it will be a bit longer. I was determined to not leave things unsaid and feelings unexpressed, like I had with my father, but death is a hard thing to stare down. I did my best.

I quickly checked my blog of films we saw together and counted exactly 100. I know I missed a few, but I like that number. The last movie I saw in my childhood home was The Red Shoes (1948), the last new film for the blog was Miracle on 34th Street (1947), and the last overall was A Christmas Carol (1951), which we saw in a rehab facility just prior to going back into the VA. I thought maybe to host old films for residents of her elderly living facility but she wasn’t there long.

I do not know why anyone would want to be a nurse, but thank god they do. I owe a huge thanks to so many people whose names I do not remember or never learned, at the VA and with Hospice. Cancer is a bitch and death leaves little room for dignity, but I have immense gratitude for the people who did their best to ease her and my family through this transition.

My mom led an active and interesting life, especially for someone from a small town in Texas. By her own account, a good life. She was proud of her military service, saw the world, and lived long enough to see her grandchildren grow into fine adults. She said she enjoyed every movie I brought, but I know we both thought Cat People (1982) was a stinker. I will think of her with every movie from this time forward and consider if she would have liked it. And every time I order hot wieners. Every holiday. Really, every day of my life. I will always miss you, mom.