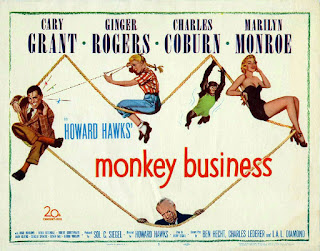 Absent minded professor Barnaby (Cary Grant) is working on an elixir of youth. He thinks he solves the problem but in reality a chimp (or “monkey”) had escaped its cage, mixed up the concoction, and put it into the water cooler. Hilarity ensues.

I have to give him credit. The 48 year old Grant was more believable as the college aged wildling than as the stodgy old scientist. But screen wife Edwina (Ginger Rogers) was downright convincing (and charming) in both roles. Hugh Marlowe of All About Eve and Day the Earth Stood Still fame gets another paycheck. Marilyn Monroe played the Marilyn Monroe character.

Don’t confuse this with 1931 Marx Brothers vehicle. I liked this one slightly better probably because it's a more conventional screwball comedy but fans of the Bros will disagree. It was pointlessly zany and holds your interest, but don’t look for any classic bits. It is what it is and that’s fine. AMRU 3.5.

Posted by Fred Theilig at 6:58 PM No comments:

On the face of things 2018 looked like a lean year for me, blog-wise, and that's not wrong. A new low in entries. I found it hard to be motivated to watch movies alone again. I didn’t fully shake that until Halloween approached.

I had tried to institute Family Movie Night where each family member took turns selecting something they wanted to see. We’d coordinate dinner into the theme. This didn’t last long. When they failed to be charmed by Breakfast at Tiffany’s and Rear Window, I knew I was fighting a losing battle.

So, here is a roundup of the best and worst of the year by category. For this list I included White Christmas (1954).

For me the best Christmas movie was The Man Who Came to Dinner (1942). I knew I was going to like it and I wasn’t disappointed. The worst was Beyond Tomorrow (1940). TCM was pitching an essential Christmas movie book and this was on the list. I found it disappointing. And the fact that It Happened on Fifth Avenue (1947) was not included in the book added insult to injury. I think mom would have liked best Holiday Affair (1949). She loved Robert Mitchum. She hated Bing Crosby so we never watched one of his together.

The best horror/thriller this year was The Walking Dead (1936). Not a great film, but the best this year. Maybe I should watch great horror films next October. There are quite a few greats I haven’t seen yet. The worse was undoubtedly The Astounding She-Monster (1957). Very little appeal there.

The best noir/mystery I think was The Petrified Forest (1939). I went back and forth here, but I think it just edges out Blade Runner (1982). Maybe because I saw Blade Runner in February, or maybe because I saw it before (in the theaters, voice-over narration and all), but Petrified Forest is my pick today. Mom would have loved Shadow of a Doubt (1943).

My favorite comedy was A Day at the Races (1937). It was the first Marx Brothers film I truly enjoyed. I considered Death Race 2000 (1975) but it’s a little campy for my tastes.

Overall I think The Petrified Forest (1939) was the best movie I saw. Biggest surprise anyhow. If I selected it over Blade Runner in its category, I have to select it here as well. A very enjoyable movie. Way better than I expected. Mom’s favorite would likely have been Shadow of a Doubt (1943). She loved mystery and she loved Hitchcock. I wish we saw it together.

Looking forward, I don’t have any set goals. I have 200+ on my IMDb watch list, so maybe I can chop fifteen off of that. At this rate I’ll run out of films never.

Posted by Fred Theilig at 9:54 PM No comments: 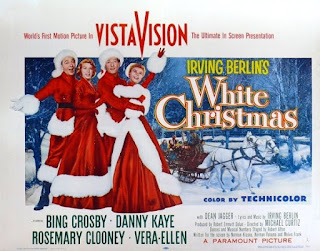 After the war, army buddies Bob and Phil (Bing Crosby and Danny Kaye) start a song and dance act. Ten years on they become quite successful. So successful that Phil wants to marry Bob off to floozy dance girls with poor diction in hopes that it would keep taskmaster Bob occasionally occupied. When another army buddy writes asking them to give career advice to his performing sisters Betty and Judy (Rosemary Clooney and Vera-Ellen), Phil gets the idea of matching Bob up with Betty, as her diction is perfect. They land in the non-snowy Vermont inn owned by their old commanding officer, who is struggling financially. Let’s put on a show!

White Christmas is a slight retooling of Holiday Inn (1942). We have Bing, tried to have Astaire but was unavailable, reused the song, and even reused the country inn set, this time located in Vermont. They even do a minstrel number, but at least had the decency to lose the blackface. Baby steps.

I remember Rosemary Clooney from her old and fat days, wondering why she was famous. Not a classic beauty, she was certainly charming. And at 25 she was definitely good enough for the 50ish Crosby. Oh, and she was George’s aunt. Her little sister was played by the anorexic Vera-Ellen. Anyone who danced next to her was paled by her energy and skill. Clearly it wasn’t food she was getting her energy from. She had to be dubbed for the singing parts.

Except for the benefit of color (and lack of blackface color), we essentially have the same movie as Holiday Inn. Many musical numbers if you’re into that sort of thing, witty and charming dialog, simple story with low-stakes consequences. AMRU 3.5.

Posted by Fred Theilig at 2:35 PM No comments: