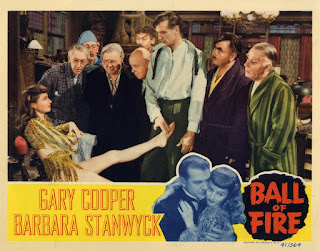 Nightclub singer Sugarpuss O’Shea (Barbara Stanwyck) must hide out until the heat is off her gangster boyfriend (Dana Andrews). She stumbles upon a group of professors (NNNNNERRRRRDSSSSS!!) working on an encyclopedia, and they want her help studying modern slang. The cops would never think to look for her there. Will love bloom?

Much of the story makes no sense but it doesn’t matter. It is just a framework for the fish out of water to fall in love with the head nerd … I mean professor (Gary Cooper). The seven other professors are modeled after the seven dwarfs, presumably with Stanwyck as Snow White and Cooper as the prince. Billy Wilder wrote the story prior to the release of the Disney movie and in one shot a marquee can be seen showing the Disney flick.

Because the plot revolves around our nerds … I mean professors trying to learn modern slang, the dialog is chuck full of exaggerated or completely made up terms, sounding silly or awkward. This is to heighten the sense of the other fish being out of the other water. Unfortunately our two leads didn’t show much on-screen chemistry. Maybe because their characters were from such different universes or maybe because Cooper acts with all the panache of an uncooked potato. Plus, the 40ish never-been-kissed Cooper looked old enough to be 34ish year old Stanwyck’s dad.

Some prolific character actors make up the the seven dwarfs, most notably S.Z. Sakall from Casablanca and most recently Christmas in Connecticut. Also here is the prolific Charles Lane, whose career spanned from the early 30’s until the mid 90’s. If ever you needed a grumpy lawyer, he was your man. His docket is even longer than Ian Wolf’s, whom I detailed recently. Between the two they appeared in almost 700 movies and TV shows, with only a half dozen titles in common, maybe because they played similar character types.

I wanted to like this film a bit more but I simply didn’t buy either character actually falling for the other. There were funny parts and Stanwyck was as charming as ever, but I have yet to see Cooper in something I liked. That said, mom would have enjoyed it. AMRU 3.
Posted by Fred Theilig at 11:47 AM No comments: