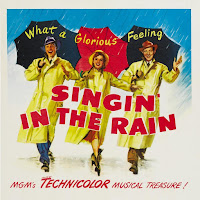 When filming a Lockwood and Lamont silent melodrama, The Jazz Singer becomes a smash hit. The studio stops production to transform their film into a talkie. Because of insipid dialogue and Lamont's horrible speaking voice, test audiences hate it. To save his career, Lockwood (Gene Kelly) remakes it as a musical, with Lamont's speaking and signing voice dubbed by Lockwood's ingenue love interest (Debbie Reynolds).

It's a paper-thin plot. They try to fix a film around a troublesome leading lady, a rom-com subplot forced into it, and peppered with song and dance numbers. But it works. I saw this years ago (it's one of very few old movies my wife likes) and I wasn't impressed. After my fairly extensive if somewhat uneven education of film, I find I like it.

Many details of the advent of sound cinema are incorrect, but for creative reasons. Singin' isn't a film studies class. Also, here is where the misconception that many silent stars lost their careers because they had funny voices comes from. While a great many actors could not make the transition, it had a lot more to do with acting style and aging than anything else.

I've made no secret that musicals, for the most part, are an art form lost on me. Doubly so for dance numbers. O'Connor and Kelly's sheer athleticism, however, is something to behold. Kelly even has Jackie Chan's respect.

But Reynolds didn't have Kelly's respect. He berated the half-his-age co-star for not being an accomplished dancer. Fred Astaire found her crying and helped her out. Donald O'Connor also called him a tyrant.

Despite off screen difficulties, on screen chemistry is great. The music is toe-tappingly good, if that's your sort of thing. It has an up-beat charm that makes it arguably the most popular in it's genre. AMRU 3.5.
Posted by Fred Theilig at 8:36 PM No comments: 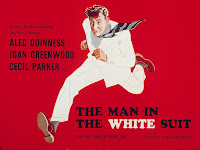 An young chemist (Alec Guinness) is determined to work on a new super strong and stain resistant fiber, but keeps getting fired. When mistaken for a chemical engineer, he manages to get the resources needed to complete his work, and has a suit fashioned. But there's a problem. If everyone has clothes that never wears out, the factories will be out of business. The factory workers, knowing they will be out of jobs as well, side with ownership. Only Sidney wants to go public.

Alec Guinness was an absent minded professor before there was one. His apparatus has a whimsy reminiscent of Willy Wonka. The Man in the White Suit is an understated comedy with social commentary. We sympathize with the altruistic chemist but we can't help but understanding the concerns of factory owners, workers, and even the old woman who washes clothes. We are left to decide our own answers.

Horror stalwart and Batman butler Michael Gough had a sizable roll. Also here is Ernest Thesiger, Doctor Pretorius from Bride of Frankenstein. He also played an undertaker in the good version of A Christmas Carol.

I am accustomed to seeing Guinness as the wizened Obi Wan or the authoritarian Colonel Nicholson from Bridge on the River Kwai. But he was excellent as the comically bumbling and sincere scientist too naive to see the consequences to his actions. I am seeing a new dimension to his ability.

The Man in the White Suite is amusing, entertaining, and thought provoking. A pleasant watch. AMRU 3.5.


"It shouldn't have done that."

Posted by Fred Theilig at 7:54 PM No comments: 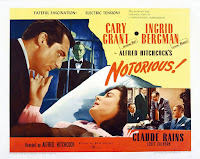 A federal agent (Cary Grant) enlists the help of the daughter (Ingrid Bergman) of a convicted German "worker". They fly to Rio de Janeiro for her to cozy up to daddy's former associate (Claude Rains) who had a thing for her. Spy and Nazi get quite cozy but this begins to interfere with her relationship with the federal agent.

This movie appears to be about Nazis, conspiracies, and weapons, but really it's about a troubled romance that this stuff gets in the way of. Hitchcock crafts a taught story around this MacGuffin. Grant is moody rather than quick witted, Bergman is Bergmanesque, and Rains is excellent as always. Not much mystery in the story, but the elements all work well.

Well made but I had issues with the on-screen chemistry. I had trouble with the spy-agent relationship. Claude Rains was awesome as usual, but maybe I just wanted Grant to play the same Cary Grant character he usually does. Still, a good, complex film. AMRU 3.5.


"Alexander Sebastian: I'm not afraid to die.
Devlin: You've got your chance, here and now"

Posted by Fred Theilig at 8:03 PM No comments: 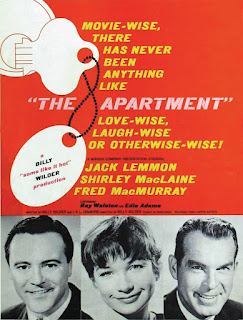 A young insurance company worker C.C. Baxter (Jack Lemmon) loans out his humble apartment to executives for their romantic liaisons. When the director of human resources (Fred MacMurray) finds out, he wants in. C.C. gets ahead in life, but things become complicated.

This movie seems to be about people not knowing what they truly want. C.C. wants success but it doesn't make him happy. Fran the elevator girl (Shirley MacLaine) wants a married man, and that never ends well. Sheldrake wants it all, and see how that comes out. It's only when they realize what's really important that anything is resolved.

Writer/Director Billy Wilder, tired of working with demanding and unprofessional Marilyn Monroe, included a small part of a dumb blond with a baby-doll voice apparently as a dig at her. Fred MacMurray got grief from fans for this very non-family friendly roll. He would do only tripe from that moment on.

Amusing, clever, somewhat dark, absolutely charming, and very satisfying. Billy Wilder is fast becoming my favorite movie maker. Every film I've seen so far has been excellent. The Apartment was so well acted, so well written, and was Best Picture in what was an amazing year for Cinema. And Shirley MacLaine is adorable. AMRU 4.

Posted by Fred Theilig at 10:51 PM No comments: 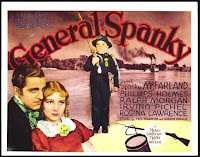 Our Gang (or The Little Rascals) make a feature film set at the beginning of the Civil War. Buckwheat is a slave on a riverboat, whose master calls him something. When slave owner disembarks, he realizes he is missing one of his slaves. So, Buckwheat goes around looking for someone to be his master. He befriends Spanky, falls off the boat, live with a kindly slave owner (which apparently is a thing), and try to thwart a Yankee attack. Boy, is this a movie that didn't need to exist.

To force myself to play Devil's advocate, I will mention that the Yankees were not depicted as evil. And that Spanky chooses to be Buckwheat's friend rather than his master. But it does present the idea of good vs. evil slave owners, effectively glossing over the tragedy of slavery. Something acceptable in 1936 but not today. What is not acceptable in any day is how unoriginal, unfunny, and otherwise uninteresting this film is.

I understand that movies making light of slavery and the civil war were made, and General Spanky was no Birth of a Nation, but still. If the best you can say about this uninteresting, unfunny, sometimes tedious film is that it could have been worse, then consider giving it a wide berth. AMRU 2.

Posted by Fred Theilig at 2:51 PM No comments: 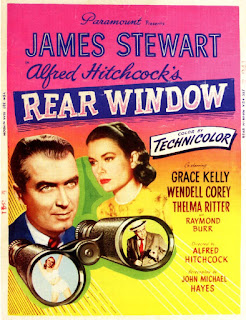 An injured photojournalist (James Stewart) is laid up in his New York apartment with nothing to do save spy on his neighbors through the rear window. From his vantage point he can see directly into the apartments of several of his neighbors and learn about their private lives. Conveniently, they are always perfectly framed and well lit.

Into this he is pestered by his beautiful, stylish, and way too young for him girlfriend (Grace Kelly) who wants to marry his old and dumpy ass. You can see why this is such a problem. Thankfully Hitch acknowledges the irony.

Anyhow, he notices one angry neighbor and gets the impression that he done off'd his wife. His girlfriend and housekeeper, initially unreceptive to his voyeuristic ways, become rapt up in our little mystery. His war buddy cop doesn't see anything he can investigate.

Rear Window is filmed entirely on one huge set. It had 31 apartments, some with electricity and running water. They tore out the first floor so that "ground level" could start in the basement, giving the set more height. It's the only time I can remember looking at a set, knowing it was a sound stage set, and thinking it looked wonderful.

There's a risque scene involving "Miss Torso". She is seen doing ballet in her bra and panties in front of a picture window. At one point she turns away from the camera, takes off her top, and bends at the waist, effectively mooning the camera. Oddly, I couldn't find a good image of it. I know I've seen housekeeper Thelma Ritter a million times, I just don't know where. No relation to John, apparently.

This is the kind of movie Hitchcock did well. A complex scene filled with drama for our hero to draw lines and create suspense. The mystery itself isn't very complex but it serves the story well, and the performances and dialog are excellent, along with the right dose of humor. Maybe my second favorite from Hitch. AMRU 4.

Posted by Fred Theilig at 9:47 PM No comments: