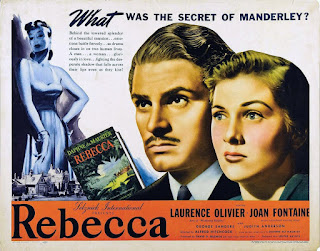 A pretty young woman (Joan Fontaine) is the travelling companion of a wealthy busybody (Florence Bates). While in Monte Carlo they cross paths with dashing rich man (Laurence Olivier). He is mourning his dead wife and thus acts aloof and antisocial. Despite this, pretty woman and dashing widower spend time together and get married. He takes her back to his expansive estate

What a peculiar film! Apparently faithful to the source material, the pace was hurried to get all the facts in place. Also, the extensive use of matte paintings and miniature sets, while impressive, were very apparent. But it was the film’s frantic pace that initially troubled me. Over time, however, it slowly won me over to this, Hitchcock’s first Hollywood film only Best Picture.

Rebecca is one of the earliest Hitchcock films I’ve seen and it has the polish characteristic of his later work, but somehow feels a little different. Set in the modern day (1940), it seems a little like a period piece. Austere mansion, polite society, elevated language, and not expressly a genre picture. That said, it does resemble Suspicion a bit, Fontaine’s (and Bruce’s) other Hitch Flick.

In the end. as I said, I did come around. It’s an interesting and very good picture. The scene between Fontaine's unnamed character and Mrs. Danvers is truly bizarre. For my money, not THE best picture of 1940, but up there. AMRU 3.5.


“I've been thinking...
Now why would you want to go and do that for?”

Posted by Fred Theilig at 9:38 PM No comments: 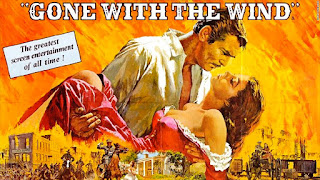 Entitled bitch Scarlett (Vivien Leigh) learns that the man she is infatuated with (Leslie Howard) is marrying his cousin (Olivia de Havilland), then the war of southern aggression takes the men’s attention away from her, and all the while she is pursued by the cad Rhett Butler (Clark Gable). After losing her precious way of life she learns to be self sufficient, saves Tara, gets her man, and lives happily ever after. Promise.

Chalk this up as another ‘How the hell did I not see this until now’ film. I’m sure this is because I have seen bits and pieces and, well, I have issues. Costume melodramas aren’t exactly in my wheelhouse and I have reveled in my dislike for this kind of film. I have called the Wizard of Oz the greatest bad movie ever and this the worst great movie ever. Not that anyone could say the line Fiddle-dee-dee without sounding like a complete fraud, but some of the acting was horrendous. But mostly I have an extreme distaste for the idolization of the old South, where the idle rich live in lavish comfort on the backs of unimaginable cruelty. And make no mistake, some of that is here, but more on that later. So, after seeing fifty candles on my cake I actually sat down and watched all seventy hours of this epic, romantic, quasi-historic costume melodrama. Here is what I have to say.

There are no likable characters in the film, said one son, with the exception of de Havilland’s Melanie, and she was just a paper-thin generic goodie character used as a foil for horrid Scarlett. To disagree somewhat, I did like the cad Rhett Butler. He knew who he was and owned up to it. He pursued Scarlett because she was just like him. Selfish, manipulative, and driven. Oh, and she was hot. And rich. This may be Gable’s best roll, even though he dismissed it as a woman’s picture. But if you really liked Scarlett as a protagonist, then you are a terrible person.

The third leg in this love triangle is Ashley Wilkes, played by a middle aged ugly man. I guess they didn’t want people rooting for him too much. Seriously, Howard was pushing fifty during filming! He loves Scarlett (I guess) but marries his cousin because that’s what the Wilkes always do. I suppose. Then the war, then all hell breaks loose, then our story resolves. Back to my principal issue.

Slavery is the single greatest evil my nation perpetrated on other humans, and that is saying something. The best thing you can say about the institution is that it was worse in other places. America didn’t need to continuously import slaves to replace the ones dying in the fields, like in the Caribbean. They lived long enough to produce new slaves. If that’s your saving grace, then, again, you are a terrible person. Slavery is never justified by the gifts of civilization and Christianity. And you cannot reminisce for the old south without acknowledging the great and terrible evil that allowed it to exist. The Old South needed to die just as the aristocracies of old Europe. Let’s get back to the film.

What I had missed about Gone With the Wind was there is more than one way to enjoy the story. You could feel sorry for Scarlett or the loss of plantation society as many people do. But the events depicted are not necessarily a treatise on the loss of something grand or the cruelty of the North, but a statement that War is Hell and here are events that happened. Enjoying the story does not necessitate sympathy with slaveholders.

Stepping away from the heavy narrative for a moment, I'd like to shout out to Scarlett's dad played by Thomas Mitchell. He also appeared in The Hunchback of Notre Dame, Stagecoach, and Mr. Smith Goes to Washington all in the SAME YEAR! Olivia de is pushing 101, almost as old as my uncle.

Gone With the Wind is an amazingly beautiful film. The sets, the photography, the editing, it all comes together wonderfully. And the copy I saw was a fairly poor transfer. I can only imagine what a fully restored 4k edition would look like. And for a film that’s two minutes shy of four hours, it never drags. That’s coming from me, charter member of Short Attention Span Theater fan club. I will see it again. AMRU 4.

I don’t leave you with a film quote (of course there were many to choose from), but one from Leslie Howard, who died four years later, a causality of the war:


“I hate the damn part. I'm not nearly beautiful or young enough for Ashley, and it makes me sick being fixed up to look attractive.”

Posted by Fred Theilig at 12:43 AM No comments: