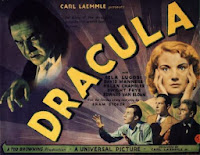 Rich guy moves to town and starts biting all the chicks. Boyfriends get jealous, nail stake through his heart. Body count two. Three if you count the Count.

I was a Dracula fan back in the day. Werewolves were cool too, but Dracula resonated with me. I saw this film for the first time as an adult, maybe eight years ago. The UHF channels back in the day never showed the big movies. It was always Crab People and Rodan stuff. When I saw it I was more than a little underwhelmed. This was my reaction again. No soundtrack to speak of (they thought it would confuse the audience), clumsy editing, overdone dramatic pauses, mediocre acting, and more liberties with the original story than anything short of Forrest Gump.

In a scene, the camera focuses on the casket, moves to a window showing the full moon, the comes back to see Bela straightening up. Oh, he must have come out of the casket. Really people? Maybe Todd Browning wasn't really all that good. Freaks, for all it's shock value, was a clumsy mess.

Ok, enough with the disappointment, here's what I found interesting. Lon Chaney was slated for the title role but died. Oh, what could have been! There was a Spanish language version filmed on the same set at night. I must get a hold of a subtitled copy.

Dracula never displays fangs nor are bite marks ever seen. He never says "Good Evening!" or "I vont to bite your neck", but that should come as no surprise. Bela would appear as Dracula one more time in an Abbot and Costello movie. Bette Davis was considered for Mina but was not considered pretty enough. They were right. The movie is based on a stage play, not the book. That play starred Bela in the lead role. They did not film where Dracula attacks Renfield, because that would be so totally gay. Totally. The movie that made 48 year old Lugosi a star came out on Valentines day, two years after the massacre. Carla Laemmele, niece of studio head Carl and cousin of producer Carl Jr, appeared briefly in the movie. She turns 104 next month.

This is an unbelievably iconic film. It is so strange to realize how ... pedestrian much of it is. The classic lines still resonate: "Children of the night ...", and the creepy, gothic atmosphere frequently worked, but it could have been so much better. It came out just before Frankenstein and set the standard, then was quickly surpassed.

Before I finish, lets say a word about Dwight Frye, who played Renfield. His comic but creepy portrayal was the highlight of the film. Every version since would be a tribute to him and a somewhat failed attempt to out over-the-top his performance. He also played Fritz in Frankenstein. And Karl in Bride Of. And maybe in a crowd scene in Son Of. He was in a pile of movies before dropping dead at age 44. I used to be 44. Nothing sadder than a Christian Scientist with a heart condition.

Required viewing for classic horror fans. For all it's faults, still creepy and iconic. And delightfully short. AMRU 3.


"Rats. Rats. Rats! Thousands! Millions of them! All red blood! All these will I give you if you will obey me."

Posted by Fred Theilig at 11:48 PM No comments:

A mysterious rocket eats an American space capsule and the US suspects the Ruskies. It was apparently launched from the Sea of Japan. Always willing to help out, the Brits have their best man on the case. Then he's killed. Roll credits.

Hoo. hoo, look who knows so much! Turns out he's only MOSTLY dead. Actually, just faking so that nobody will suspect him. Or, apparently, recognize him when he walks around without disguise. But what's the point of being a world famous secret agent if nobody knows who you are.

Anyhow, a Russian rocket is also eaten and they, damn commies, blame the sweet old US of A. Bond needs to solve this riddle before the US puts up yet another rocket. I suppose in the 60's it seemed like we were sending men into space every day.

Well, anyhow, the spoiler is that KAOS ... I mean SPECTRE is using their unbelievably advanced science to start a war. Lots of money in global devastation. Bond talks to people who are then killed, is frequently rescued at unbelievably convenient times by a hot chick, climbs a volcano to find it's a secret hide-out, flies around in an ultralight and fires missiles at people, and gets a truly awesome amount of Asian tail. In a nutshell, preposterous but follow-able story, great ninja action, hot chicks.

Connery didn't do the next Bond film (On Her Majesty's Secret Service), but did do Diamonds are Forever. Because rumors were circulating about him leaving the franchise, the studio played into them saying Bond gets married, dies, and becomes Japanese. He does all these things here, lucky him.


"Oh, the things I do for England"

Posted by Fred Theilig at 12:53 AM No comments: 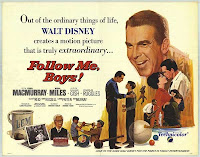 Over the hill travelling musician (Fred MacMurray) feels he needs to give up his vagabond life and set roots. When the band makes a quick stop in a small town, he makes the impulsive decision to stay. In order to impress the hot bank employee (Vera Miles) he steals her idea to form a Boy Scout troop to keep the youth from mischief. In doing so, he becomes the town's first Scoutmaster.

What follows are various heartwarming stories about his trials and tribulations with the boys and in love. I woke refreshed two hours later.

I've been a scout leader for many years, and this is the first on a short list of feel-good Scout movies. It was high time I watched it. I encouraged my three sons (no smart cracks, people!) to watch it, as they too have logged many hours in the scout community. They opted to skip this one. Good move.

It was a little awkward watching the pushing 60 MacMurray woo the much younger Miles (still living). As the story moved forward in years, they didn't need to age his character much. The elderly town millionaire-with-a-heart-of-gold was played by Lillian Gish, fifteen years Fred's senior. She would outlive him by two.

Many of the vignettes seemed unnecessary. I thought we were still in 1932 when the troop has an amusing run-in with the US military on training maneuvers. With Scoutmaster Lem captured as a member of the enemy team, the boys are left to their own devices. Here is a good place to shorten the movie. I was crying anachronism what with all the high tech army gear, but apparently this segment was set in the 40's.

Side stories include Scoutmaster Lem's wooing of the Miles character, the troubled son of the town drunk (Kurt Russell), the land grab, the mountain climbing controversy, all culminating with a parade.

High Disney production, mildly amusing melodrama, too long (two hours thirteen). As a scout leader, I need to have seen it. So, therefore, AMRU 3, and mission accomplished. Not too painful, but it should have been shorter and 60's Disney family dramady isn't exactly in my wheelhouse. Nice to see Lillian Gish in a soundie.

Posted by Fred Theilig at 12:51 AM No comments: