World War One German U-boat sinks a passenger ship. A small number of survivors attack the U-boat and take it over (it could happen). They set sail for the closest friendly port but the nasty Germans tamper with the compass and head south instead of west. Out of provisions and fuel, they discover an island. And island that time has forgotten about, apparently.

They decide on an uneasy alliance while they try to refine petroleum from a tar pit into sub fuel. Meanwhile, they explore their new home. Apparently the more upstream you go, the more "evolved" things become. So, that's why there are dinosaurs living alongside hominids. Explains everything.

I watched this for two reasons. First, I vaguely remember seeing a similar movie as a kid and wondered if this was it (it was), and secondly, because of an old britcom my wife was watching. A Fine Romance is about a middle aged Judi Dench and the passionless relationship she is in (interestingly, with her real life husband). Old Judi has a hot young sister played by Susan Penhaligon, who six years earlier was a survivor of a passenger ship torpedoed by a German U-boat and later had to run away from giant puppet dinosaurs.

As I mentioned, I did see this movie as a kid (8ish) but I remembered nothing of the story. I would see a scene and just knew what would happen next, and it would. Well, not much else to say here. Amusing, nostalgic, not much else. No good quotes to end with. AMRU 3.
Posted by Fred Theilig at 9:34 PM No comments:

A young pretty governess (middle aged pretty Deborah Kerr) is put in charge of two rich orphans by their unconcerned uncle. Seems the old governess died quite unexpectedly. She's not sure she is up to the challenge but uncle doesn't give a rat's ass. Just don't pester him about it.

Well, young miss Giddens starts to see people that aren't there. She then learn more about the dead ex-governess and her relationship with the dead ex-valet; and his influence on the children. Maybe they are still exerting their influence on them. They aren't saying but she knows they see them as well.

Loosely based on Henry James' The Turn of the Screw, The Innocents was exquisitely filmed, excellently written, and wonderfully acted. Movies sometimes throw in faux Victorian dialog and period costumes to give an air of respectability (I'm looking at you, Isle of the Dead!), but The Innocents truly earns it. Few, if any, startle moments, but the taut story line keeps your attention focused. Are ghosts haunting these poor (innocent) children, or is our governess going batty? Can't be sure.

Sadly, I can't think anything else to say about it. No good quotes to close out with, either. It does, however, make me want to read the book. AMRU 4.
Posted by Fred Theilig at 10:48 PM No comments: 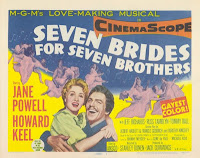 Hunky mountain man Adam Pontipee (hunky Howard Keel) needs a wife, so he heads into town to fetch one. Of course with the women folk being in short supply in the old west, he is assured there are none available. Not to be dissuaded, Adam sets out to do just that.

Adam happens upon young, pretty Milly (Jane Powell) and after forty seconds of convincing, she agrees to be his wife. Once to the Pontipee homestead, she quickly learns that her fate is less of a mountain wife and more indentured servant to Adam and his six boorish brothers. She hatches a plan to con her unsuspecting friends in town to share in her personal hell. But first she must civilize these ginger barbarians.

What a silly-ass movie! Not exactly a girl-power kind of film. At one point the men kidnap the six women and keep them prisoner over the winter to woo their hearts. Ah, traditional marriage! Here's what I found interesting:

MGM was convinced it would be a flop so they cut the budget and made sets instead of shooting on location. The cheesy sets added to it's camp appeal and it was a huge cash cow for the studio. The movie featured catwoman Julie Newmar as one of the captured women. Also, I realized after seeing it that two principle actors were in horror movies I've seen (Keel in The Day of the Triffids and Russ Tamblyn in The Haunting).

The choreographed numbers were quite impressive, if you like that sort of thing. There was a long take wood chopping song number that was technically impressive. Also a barn raising dance number that took almost half of the shooting schedule. Musicals aren't exactly my bag, but it still held my interest. My wife likes them and otherwise hates old movies, so I took the opportunity to watch it with her. AMRU 3.


"A man can't sleep when he sleeps with sheep."

Posted by Fred Theilig at 12:49 PM No comments: