Milo, a bored rich kid, sits on the phone talking about how bored he is with his bored friend, when he notices a giant present for him in the other room. He pulls a lever and it turns into a tollbooth. With nothing better to do, he climbs into a toy car and drives into an animated world of adventure.

There he learns how the kingdom of letters (Dictionopolis) is feuding with the kingdom of numbers (Digitopolis), He travels to the Castle in the Air to rescue the Princesses of Rhyme and Reason. Along the way he meets a watchdog named Tick Tock, a “Whether” Man, a Spelling Bee, Faintly Macabre the “Which”, and a Mathemagician. Get the theme here?

Finally Chuck Jones got the chance to do a feature film, and because of studio financial troubles it took forever to be released and wasn’t promoted. It’s no surprise that it wasn’t a success. He never got another opportunity.

The Phantom Tollbooth combines life lessons, amusing wordplay, and adventure. Maybe it has so many elements that it becomes muddled. Various characters and situations would benefit from more development and screen time. I can imagine a half hour TV series exploring every nook and cranny of this imaginative world. A big Chuck Jones fan, I was very happy to find this film, and enjoyed it. But maybe from high expectations, or from troubled production, I’m left feeling it falls short of great. AMRU 3.5.

Posted by Fred Theilig at 5:45 PM No comments: 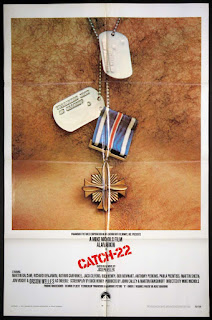 Based on the Joseph Heller novel and as I understand, a fairly faithful rendition. I took my son's word. Reading books is hard. That's why I watch. The story is non-linear and must be watched to the end for it to make any sense. the screenplay was written by Buck Henry, who also wrote Mike Nichols' The Graduate. Again, I'll say it. So THAT'S why SNL kept having him appear.

Catch-22 is chuck full of familiar character actors. Bob Newhart, Jack Gilford, Norman Fell, Richard Benjamin, and even Art Garfunkel. Future heavies Martin Sheen and Jon Voight, plus heavy has-been Orson Welles. The first cinematic display of someone on a toilet included Martin Balsam (12 angry men, Breakfast at Tiffany's, and this episode of The Twilight Zone I just saw) and Anthony Perkins. The first time a toilet was shown was in Psycho, which also featured both men.

Because of it's very nature, the story cannot be described. There is an absurd, dreamlike quality, and the audience is forced to pay close attention to make sense of it all. Frequently background noise drowns out the dialog, but that's purely intentional. This is not a movie for everybody, but it was definitely a movie for me. AMRU 4. Arkin may be this country's greatest character actor.

Posted by Fred Theilig at 10:53 PM No comments: 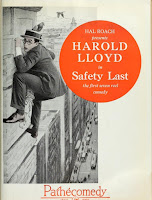 A young man (Harold Lloyd) goes to the big city to become successful enough to marry his sweetheart. Things don't go as planned, but he tries to keep up appearances. Then become complicated when sweetheart travels to the city to visits him at work. So, he climbs the building to make some extra cash. You know the scene where he hangs from a clock face. It's real famous.

As a kid I was told Lloyd actually performed these stunts on the building, with eight fingers (two were blown off a few years earlier), without a stuntman. Well, turns out, not so much. A stunt man was used, and Lloyd wasn't nearly as far off the ground as it seemed. The bricks were modified to give him a solid grip. The stunt man didn't spill the beans until Lloyd died. Also, he didn't want to diminish the real danger of the stunts.

Lloyd would marry his almost 22 year old co-star two months before the film's April fools day release. He discouraged her from continuing her career shortly thereafter.

Safety Last! has some fairly clever visual gags and the wall climbing in the third act holds your interest, however the film is sometimes tedious despite the 70 minute run time. This is one of about a billion silent comedies Hal Roach has his name on. He is credited as "Presenter" and writer, and uncredited as producer.

Paper-thin story, tired comedy mixed in with some better bits, capped off by cool stunts in the third act, and you have a very watchable film. AMRU 3.
Posted by Fred Theilig at 10:55 PM No comments: