An impulse pickup at the library. In this made for TV movie, Vincent Price sits, mostly, alone on stage and recites a somewhat abridged version of four Edgar Allan Poe stories: The Sphinx, The Tell-Tale Heart, The Cask of Amontillado, and The Pit and the Pendulum.

Not much to say, we know the stories. Price sits and reads and shows off his acting chops. Quite impressive, actually. But at the same time, kinda boring. My boys weren't going to watch this one with me.

On the flip side of the disk is The Tomb of Ligeia. I chose to watch Evening because it was shorter. I returned the disk, Ligeia unwatched. I think I've seen enough Price costume dramas for a while. AMRU 3.
Posted by Fred Theilig at 6:20 PM No comments:

Sinbad is one awesome sailor! At the brink of exhaustion, he navigates his ship to the island of Colossa, where the crew relax for some R&R. Unfortunately, there's this grumpy cyclops who pays them a less than friendly greeting. While bravely running away from the giant, scary monster, they rescue a mysterious wizard who seems totally trustworthy!

They all return to Bagdad where they enjoy themselves in the green zone and plan Sinbad's wedding to Princess Parisa. It seems that Mr. Wizard dropped his lantern-thingie during the rescue and wants Sinbad to raise an army to return to Colossa and defeat the evil cyclops. Sinbad and his kin politely tell him to go pound sand.

Next morning, the hot Princess Parisa wakes up fully refreshed and about three inches tall. Mr. Wizard says the only cure needs the shell from a Roc, which can only be found on the island of Colossa. Hmmm ...

In addition to the roc and cyclops there is a dragon, a skeleton, and other stop-motion fun. Sinbad was obligatory after watching Jason a couple weeks earlier, and it didn't disappoint. I think Jason was a bit better, but I am glad I watched it. My boys are too. AMRU 3.

One note about the hot princess. She was played by the hot Kathryn Grant, who became better known as Kathryn Crosby after marrying some old duff named Bing. She was thirty years his junior and called him a male chauvinist pig after he died. She has since remarried and has had more work done to her face than a strip club bar stool.
Posted by Fred Theilig at 5:01 PM No comments:

"And at a deadly pace
it came from outer space
and this is how the message ran ..."

Actually, that message was "go away and leave us alone!" Yup. Fifth movie referenced in the song Science Fiction/Double Feature. Pipe-smoking amateur astronomer (Richard Carlson) and his hot girlfriend (Barbara Bush ... I mean Barbara Rush) see what they assume to be an asteroid. They investigate. They, along with a pilot friend, discover a giant crater. Astronomer boy thinks it's a good idea to climb down to take a look. He sees, not a meteor, but a space ship, complete with aliens. There is a cave in and he barely escapes. The ship is totally covered and nobody believes him. At least, not until some of the townspeople start acting real strange.

I noticed straight away that much of the plot was borrowed for Alien Trespass (2009), right down to the astronomer's pipe and hot wife/girlfriend. Another thing of interest is, see that hot blond on the cover? If she has a full half-minute of screen time I'd be surprised. Blond, busty, trampy, all good things, but still I'd choose Barb Rush in a heartbeat. She was the girlfriend of a minor character played by the Professor himself, Russell Johnson. He has shown up in two Sci-Fi movies so far.

Not much more to say. We want to trust the aliens. They just want to get out of there. But why won't they show their real forms? Why are they abducting townspeople? How come they leave glitter every where they go? What's up with stealing clothes? And what's the deal with airline food? Am I right, people? Huh?

Posted by Fred Theilig at 9:43 PM No comments:

In a similar vain as 1963's Twice Told Tales, Vincent Price stars in three stories "inspired" by Edgar Allen Poe. While I've read very little from Nathaniel Hawthorne, Poe and I go way back. The three stories are The Black Cat, which isn't one of my favorites, The Case of M. Valdemar, which I never read, and Morella, which I never heard of. First up is Morella.

Young hottie Lenora (groan) visits dad (Price) who lives in an spooky mansion with cob webs and spiders. Where else would Price live? Lenora discovers mom resting in bed, which is a bit of a shock as she died when Lenora was an infant. Oh, and still blames her for her death.

Next is The Black Cat. Peter Lorre is an old, fat, drunk, layabout who is abusive to his wife. Despite this, his wife is fairly young and kinda hot. While about town he stumbles into a wine tasting being hosted for a famous and renowned wine taster (Price). Lorre proceeds to challenge him to a competition. Here, Price is about as gay as you've ever seen him, although he does use proper wine tasting mouth techniques, don't ask me why I know that. Being a notorious lush prepares one for so few things in life, but apparently one is to be a great wine critic. Lorre and Price strike up a friendship and Lorre brings him home to meet his young, under appreciated, and neglected wife.

The writers decided to combine the story with The Cask of Amontillado, a story I liked much better. Price's character is name Fortunato and they even sample some Amontillado.

The final story is The Case of M. Valdemar, which is based on The Facts in the Case of M. Valdemar. Price is a dying man and the only person who can temporarily relieve him of his pain is a mesmerizer (Basil Rathbone). Hot hot hot daughter doesn't like the good doctor and doesn't trust him, but daddy does and that's all that matters. What the doctor wants to do is mesmerize Price at the point of his death to see what happens. Oh, and to nail his hot daughter, but who wouldn't. Unfortunately for everybody, she marries a Chinese millionaire shortly after filming and retires from acting.

Roger Corman directed it while taking a break from doing absolute garbage. Somewhat darker than Twice Told Tales, I found them a little more entertaining and even handed. The sets seemed a little less cheesy. Price, Lorre, and Rathbone reunite in 1963 to do a parody called The Comedy of Terrors. Lorre would do two more undistinguished movies, then the man so amazing in M would pass from this Earth a couple months from his 60th birthday.

My oldest is a fan of Sherlock Holmes. So was I back in the day. I thought he might enjoy watching Grand Moff Tarkin and Count Dooku. He never got the chance. No television if you can't do your homework. The day before it was due, I watched it alone.

To be honest, I was a little iffy on this. I never read the story and really think Basil Rathbone when I think Holmes, and the 1939 treatment is really the definitive one. That said, Peter Cushing made for a better than fair Holmes.

Christopher Lee is Sir Henry, the heir to the Baskerville estate. He became the air when dear Sir Charles passes away, possibly done in by an evil hound. Seems this hound has made a habit of chowing down on the Baskerville heirs, starting many years ago with Sir Hugo, in punishment for slicing up this servant girl, who totally deserved it, what with her not wanting to be his whore and running away and all. Anyhow, family friend and physician Dr. Mortimer hires Sherlock to investigate.

Well, there is an attempt on Henry's life, an escaped convict, an abandoned mine, a hot crazy chick, and lots of good old fashioned Holmesian dialog. I understand there were some significant changes from the book, but again, I never read it. Maybe I will. Certainly I'll watch more Sherlock Holmes. Unfortunately, with the exception of some TV work, Cushing never did Holmes again.

Not overly thrilling but engrossing never-the-less. I'm sorry my boy had to miss it. Maybe I'll get it again. AMRU 3.5.
Posted by Fred Theilig at 9:10 PM No comments: 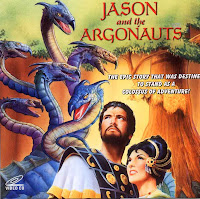 The bulk of my TV time allotment was used up by the Olympics. Coinciding with the Olympics, two things events occurred in the last few weeks that have influenced my movie watching. One was my wife insisting we all go see Percy Jackson and the Olympians. We all liked the movie and it got me thinking of the Greek myths. Another thing was that Leonard Maltin suggested The 7th Voyage of Sinbad in his movie a day calendar. No, not Greek by any stretch, but Ray Harryhausen, who did the special effects for Sinbad, later did the effects for Jason and the Argonauts. I was speaking to a scientist at work (one of two people I know who give a damn about pre-CGI movies) and the following day Jason was left at my desk. I promptly watched and returned it.

Pelias learns that the gods have ordained his conquest of the kingdom of Thessaly, so he does. The gods also will that the dead king's son, Jason, will in turn dethrone him. What's a tyrant to do? Kill the ex-King's offspring, of course. But, dang-it, Jason gets away. Of all the luck.

Many years later, Jason bumps into Bad King Pelias but doesn't recognize him. Pelias learns that Jason is hunting for this Golden Fleece, which is supposed to be totally awesome, and Pelias thinks that's nice, because it will send Jason to the ends of the world.

Jason is helped by Hera (played by the hot Honor Blackman), but she can do so only five times. Jason speaks to her through a creepy headpiece attached to the Argo. Quickly Jason uses up his Hera favors and is mostly on his own. He battles Harpies, a giant bronze man, and rocks with a bad attitude. Hercules loses his boyfriend so he takes off to search for him.

Arriving in Colchis, land of the mystical sheep skin, Jason meets Medea, played by the oh-my-god-hot Nancy Kovack. Jason, kills the Hydra (stabbing it worked, go figure), steals the skin (sitting on a dead tree in the middle of nowhere), evades some awesome skeletons, and returns to his boat with the hot Medea.

Only thing left to do now is set sail and ... credits roll. What? No journey back? No confrontation with Pelias? What's the deal? Is there a Jason II? Nope. That's it. Oh, come on!

The two of my boys that watched really liked it. Apparently the mythology presented is fairly accurate, though the benchmark is rather low. The fact that just about everybody's voice was dubbed was annoying, but I would consider seeing it again. AMRU 3.5.

Sinbad has already been picked up from the library. Oh, by the way. Percy Jackson was very accurate to the Greek myths, but apparently not at all to the books. Athena's daughter is hot.
Posted by Fred Theilig at 6:42 PM No comments: