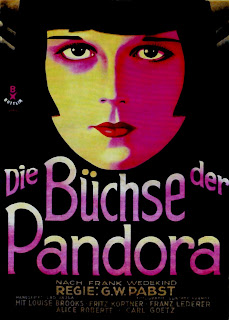 Lulu (Louise Brooks) is a promiscuous young woman in a relationship with an older, respected man. He must break off the scandalous relationship when he decides to marry his respectable fiancee. Lulu doesn’t play nicely and sabotages her lover’s respectable engagement. Things don’t go well for either.

Brooks was a nothing actress who walked out of her contract with Paramount to star in this Weimar silent film and became a huge star. The role of Lulu almost went to Marlene Dietrich, who had to settle on the role of Lola Lola to launch her career. Unlike Dietrich, who disingratiated herself with Hollywood over the next two decades, Brooks got it all done before the end of the 30s.

Lulu’s character is never in question. She’s a golddigger, woman of easy virtue, maybe prostitute. But she isn’t a bad person. But what strikes me most is her disconnect between her actions and their consequences to herself and others. Her friends, enchanted by her, follow the path to ruin to help her out. It’s all very tragic, but Lulu is the most tragic of all.

Had Pandora’s Box been a talkie, (like The Blue Angel), and had Brooks played nice a little better, she may be remembered as well as Dietrich is today. Maybe more. She had beauty and charisma and was set to explode in Hollywood’s golden era. Instead, she is principally known for this movie. But it’s quite a movie. She could have been so much more. AMRU 4.


“It's strange how you can get booze on credit but not bread.”

Posted by Fred Theilig at 8:07 PM No comments: 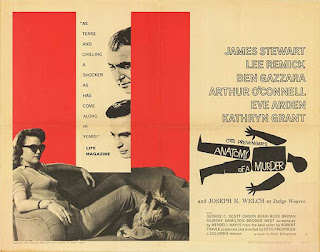 Paul Biegler (James Stewart) is a lawyer who lost his drive when he lost his District Attorney position, so he spends his time mostly fishing and chatting with his alcoholic lawyer friend (Arthur O’Connell). He is urged to take the case of a young Army officer who murdered the man that raped his hot hot wife (Lee Remick). Urged mostly by his assistant (Eve Arden) who would like to be paid again.

Courtroom dramas can be problematic. Procedures and even the law itself is thrown out the window for the sake of drama. Quite a bit of that goes on here. Stewart’s Paulie must struggle to have the (alleged) rape admitted in the defense of his (allegedly) temporarily insane client. Things said in open court that should have been said in sidebar, and don’t get me started with the surprise witnesses.

All that aside, we wonder if the defendant was insane, or if the hot hot wife was actually raped, and what plot twist will come next. What the verdict will be, and what it should be, is always in question.

Older readers may recognize Eve Arden from Our Miss Brooks. I recognize her as Principal McGee from Grease (1978), and to a lesser extent, Grease 2 (1982). Murray Hamilton, the mayor of Amity (and Mr. to the adultering Mrs. Robinson), played the prosecuting district attorney. A youngish George C. Scott had a sizable role.

But the real story is the hot young Remick. She played the questionable victim in a very Lolita-esque manner. She flirts with Stewart’s Paulie and hangs out with strange men while the husband waits in lockup. Stewart again is excellent, having fully graduated from Rom-Com roles. Remick didn’t do many feature films, then died young of cancer.

Anatomy of a Murder, despite its court procedure shenanigans, is quite entertaining. Otto Preminger (you know, Mr. Freeze) was a master filmmaker, this being one of his best. Not one to shy from controversial issues (his next project was Exodus, openly written by blacklisted screenwriter Dalton Trumbo), Anatomy is unflinching with its discussion of the (alleged) rape. To the point that Stewart’s father urged people not to see it. No big whoops by today’s standard, but you can see how Hollywood was slowly evolving from the provincial palace it was once. A very entertaining watch. AMRU 3.5.

Posted by Fred Theilig at 7:44 PM No comments: 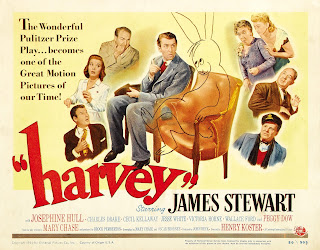 Elwood P. Dowd (James Stewart) is something of an embarrassment to his aunt and cousin. He is pleasant enough, but he keeps introducing people to Harvey, a 6’ 3 ½” invisible rabbit. This won’t do in polite society. Especially since his slightly younger cousin is trying to catch a man. So, they decide to have him committed. Things don't go according to plan.

I've never been impressed by Jimmy Stewart. Not that I have a problem with him, he always puts in a fine performance. But I am never amazed by him. Many of his characters are alike and his affable stammering becomes irritating at times. In Harvey, however, I have found his best performance so far. He comes off as something of a simpleton, having an invisible friend and all, but there is more to him than that. His behavior is explained by the shock of his mother dying, or alcoholism, yet he has found a good place with his Pooka. You’ll have to look that one up.

Maybe you remember Elwood’s aunt Veta (Josephine Hull) as Aunt Abby from Arsenic and Old Lace. She’s just the batty Auntie type, I suppose. If you blink (or even if you don’t) you will miss Fess Parker’s first movie role. He’s the man singly responsible for causing Americans to confuse Davy Crockett with Daniel Boone.

It's chatty, as plays-turned-movies tend to be, clever, and charming. There is a magnificent serenity with Stewart’s Elwood. He enjoys his life, enjoys his company, and never gets too upset at anything. He truly believes in Harvey's existence and by the end, you will too. Stewart often referred to it as his favorite role, and it's my favorite of his, so far. AMRU 4.


“Well, I've wrestled with reality for 35 years, Doctor, and I'm happy to state I finally won out over it.”

Posted by Fred Theilig at 5:33 PM No comments: 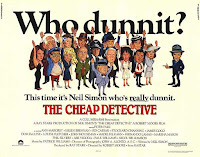 Private dick Lou Peckinpaugh (Peter Falk) is suspected of his partner’s murder, and people stream in trying to find lost treasure, then his old flame returns with her husband looking to escape the Nazis, and … well, following the plot isn’t really the point.

This Maltese Falcon/Casablanca mashup and parody is something of a sequel in spirit of Murder by Death (1976), with the same writer, director, producer, and several actors. It showed up on a basic cable movie channel and my mom recorded it.

This film works on three levels: nostalgic references to the two source movies, seeing the parade of celebrity cameos, and watching the characters behave foolishly. While the cameos and references were amusing (and extensive), the comedy fell somewhat flat. Frequently they were obvious, unfunny, or downright dumb. And that presents a problem because there is no coherent story to tie the humor to. The jokes had to stand on their own, and for the most part, they didn’t.

Highlights were Madeline Kahn as the Mary Astor character and hottie Ann-Margret as, well, I don't know who. Odd to see the unappealing Louise Fletcher (Nurse Ratched or Kai Winn, depending on your predilection) in the Ingrid Bergman role. I found that downright distasteful. I am glad I watched it, as I’m a huge fan of Murder by Death, but it should have been funnier. Time for me to rewatch Murder by Death. AMRU 3.


“I'm using rented bullets for my gun. We all got problems.”

Posted by Fred Theilig at 4:54 PM No comments: