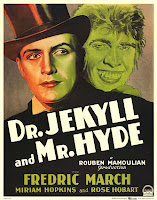 Good Doctor Jekyll (Fredric March) wants to experiment into the darker side of human nature, when ... oh, what's that? You know the story already?

When a film like Jekyll and Hyde (or Jee-kal) is a heralded as this, why anyone would do what seems like a shot for shot remake only ten years later is a mystery to me. I mentioned in my write up of the 1941 version that it was a remake of this. I was wrong. They both are versions of a play based on the story. Either way, the scenes, sets, and story line matched too closely. And now that I've seen both, I can't help but compare.

The biggest difference is where Tracy's Hyde was a big jerk, March's was truly evil. Where Tracy's performance was competent and workmanlike, March was astounding. Every nuance, every subtle jesture was totally separate between gentleman and brute. This may have been the best acting performance I've seen to date. 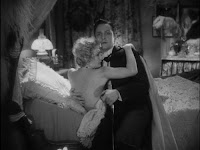 As this version was "pre-code", Ivy Peterson (Miriam Hopkins) was free to be a prostitute. It was Jekyll's lust for Ivy that encouraged him to experiment on himself. And lustworthy she is. I wish I could find a better still. We're talking serious side-boob. Here Jekyll is busted by his uptight college.

Artsy camera direction what with the POV shots and fancy overlays and wipes, tremendous acting, and awesome makeup (the transformation scene was out of this world), this movie ruined two otherwise good movies simply because of comparison (Werewolf of London was the other). AMRU 4.


"Perhaps you prefer a gentleman. One of those fine-mannered and honorable gentlemen. Those panting hypocrites who like your legs but talk about your garters."

Posted by Fred Theilig at 8:18 PM No comments:

No he won't. Sixth movie referenced in the song Science Fiction/Double Feature. Eleven down and item from the bucket list complete.

People are being strangled and partially eaten during the full moon. Papers are calling it the Moon Killer Murders. The police are investigating. They speak with eminent Doctor Xavier (Lionel Atwill), or Doctor X to his homies. He runs a prestigious medical academy and the police both need his expert opinion and suspect that the murder is one of them. So, they interview his posse.

And what a motley crew they are, just bubbling with suspicion. Into the mix arrives a reporter trying to get a scoop and the good doctor's hot daughter (Fay Wray). The cops give Doc X 48 hours to unmask the killer or else they'll start doing their job. Doc invites his five suspects to his spooky mansion for an experiment. Along for the ride are the amusing butler and maid.

Since I started this-here blog, I've greatly expanded my sources of movies. Initially all I had was the trusty public library plus my own humble collection. Then I went to Netflix. Last Christmas I got a Roku box that allowed me to watch Netflix and Amazon Prime from the bedroom, as well as sources of public domain movies via Pub-D-Hub and the like. At the beginning of this month I made the giant leap into the 21st century and subscribed to digital cable. Within that first week two movies I haven't been able to lay my filthy hands on were on TCM. Doctor X was the first.

Doc X was filmed in an early two color Technicolor process that lacks the vibrant colors we know today but worked well in the horror genre. For years the movie was only shown in black and white but the color version was discovered and restored, and that's what TCM is showing. It looked great.

Technically a comic horror, and in many ways a crime drama, Doctor X is both somewhat interesting and somewhat amusing. The early thirties comedy showed through with great comebacks as "What that? Haaaaaay!" Were this movie not in color and not on the Science Fiction/Double Feature list, it would be quite skipable. But that's not the case and it was nice to see Fay in color and Lionel in a leading man role. AMRU 3.


Cop: No one goes in there except stiffs.
Taylor: Oh yea? What's keeping you out here?
Cop: What the? Haaaaay!

Posted by Fred Theilig at 12:03 PM No comments:

The hot young protege Nell (Anna Lee) of fat Lord Mortimer (Billy "big as a" House) is horrified to see the treatment of patients at an asylum, and after a chance encounter with a Quaker, a strange thing happens to her: she starts giving a crap for someone besides herself. She pressures fatty into mandating reforms at Bedlam asylum and this sits none-too-well with apothecary general Sims (Boris Karloff). So, after hot Nell burns bridges with Big Morty, he and Sims conspire to have troublemaker Nell committed. Serves her right.

My Isle of the Dead DVD from the library was apparently a double feature. Another non-conventional horror movie by Val Lewton, but this time a bit better then than before. Above grade dialog (compared to choppy and sometimes downright Ed Woodian-like of Isle) and excellent sets and costumes. Plus strong acting performances all around. Not too Horror-like, but it had an Evil Karloff and the insanity angle, so it's in the club. Like Isle it was inspired by famous paintings (go look it up on Wikipedia, I ain't got time here!) and they even recreated some in scenes. It'll all go over your head unless you're into art, but suffice to say it's a well crafted film.

Hot Nell is wearing the dress Scarlet made from curtains in Gone with the Wind. Oh, how I hate that movie. One thing I found interesting is how they made Quakers seem downright interesting. I liked Bedlam much better than Isle, but alas, it gets the same score. I can't imagine seeing it a second time. AMRU 3.


"If you ask me, M'Lord, he's a stench in the nostrils, a sewer of ugliness, and a gutter brimming with slop."

Posted by Fred Theilig at 7:48 PM No comments:

During the First Balkan War, right after commanding his bestus buddy ever to shoot himself in the head, the good General Pherides (Boris Karloff) decides to put flowers on his wife's grave. Said grave is on a nearby island and he brings new bestus buddy ever, an American reporter, along for the ride.

After spending the night at a rural estate, they wake to find that one of the other guests has died of ... wait for it ... the Plague!

Well, Pherides decides to take command of this band of civilians and quarantine the group until the disease has, well, run it's course. Along the way we get to know the odd collection of guests trapped on this Isle where people Die. The man who puts his faith in Hermes, while erroneously thinking he is the god of medicine, the young(ish) hottie(ish) who hates Pherides for his famous cruelty, and the old housekeeper who thinks the hottie is a vrykolakas, some sort of Greek vampire like thing.

So, what are the horror elements here? (psst. spoilers) First, there's Boris. Next, there is death both by plague and murder. There's the element of the supernatural. Finally there is premature burial. Can't go wrong there, right? I'm not so sure. Good 'oll Val Lewton did a different kind of horror. Cat People and I Walked with a Zombie are great examples of excellent movies that stretch the genre. Here, it falls short for a couple of reasons. Not once, even or a second, did the viewer entertain the notion that pretty Thea was the undead. The only thing that legitimately lends to the argument is one decent startle moment. Other than that, it was Karloff does Wuthering Heights.

But this movie was intended, made, and billed as horror, so I give it my horror label. It is also the least entertaining Lewton film so far. And Martin Scorsese called it one of the scariest horror movies of all time. Clearly he was thinking of Karloff's curly hair wig. AMRU 3.
Posted by Fred Theilig at 9:40 PM No comments: