A pathologist (Vincent Price) is doing research on fear. He notices that the spines of executed criminals are split open leading him to believe that terror, not the electric chair, is what kills them. When the deaf mute wife of a theater owner dies unexpectedly, he x-rays the body and discovers the culprit: The Tingler! He cages the creature for further research and determines that a) everyone has one of these in their bodies and b) you can keep them from killing you by screaming.

The Castle-gimmick was that some of the theater seats were wired to give the occupant a shock at appropriate times during the film. Presumably the appropriate time was when the tingler escaped into the theater (the one in the movie), they cut the house lights, and Price tells everyone to scream or else the tingler will get them. That might have worked.

Here's something cool. The movie is in black and white except for one of the scare scenes, where the blood is red. The effect worked but it kinda makes you wonder why they didn't film the whole thing in color. Also, the actors playing the young couple actually got married (kinda cool) then divorced (not so cool). The actors playing the older couple (the theater owners) both died eight years later in May of 1967 (totally uncool). The creature itself was modelled after a Velvet Worm. Wikipedia doesn't say if this species moves through the use of visible wires. Another interesting part is when the Price character wanted to feel fear (you see, he's super macho-brave and is never afraid), so he takes a hit of acid. The first time an acid trip was featured in a movie.

Typical William Castle. In a TCM Biography his daughter said of the film, the biggest obstacle for the actors was to not burst out laughing at the silly prop and absurd dialog. Typical Vincent Price rising above the source material. There was a background story about Price's philandering wife, or her sister dating his assistant (see above comment regarding a "young couple"), but it doesn't play much into the film except maybe to give Price an opportunity for biting dialog. A fair effort all-in-all. A well made, cheesy, B horror movie. AMRU 3.5.


"The tingler exists in every human being, we now know. Look at that tingler, Dave. It's an ugly and dangerous thing-ugly because it's the creation of man's fear; dangerous because... because a frightened man is dangerous."

Posted by Fred Theilig at 8:19 PM No comments:

Russ Meyer has long fascinated me. Undoubtedly the biggest name in the 60's "nudie cutie" genre, his movies are legendary and annoyingly hard to come by. Netflix? Never heard of him. Amazon Prime has nothing for free. And forget about your local library. YouTube to the rescue, believe it or not. That can't be legal. 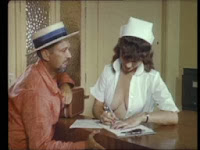 Anyhow Mr. Teas (actual name!) sells dentist stuff door to door and along the way is greeted by unusually well endowed women showing unusual amounts of cleavage. The dental hygienist, his office secretary, the counter woman at the diner, some chick at the beach. And he concludes there must be something wrong with him because, and here's the sick part, he LIKES it! He even starts fantasizing about the women! Clearly he needs serious therapy.

A few odd things about this movie. First, there is no actual dialog. The movie is done in voice over narration (frequently a bit of trivia about a non-fleshy element on screen) with an insipid soundtrack. Secondly, with one exception, nobody appears to notice or care that Mr. Teas is snooping on the ladies. Also, there is no inference of sex. Well, except once and that turns into a comedic moment. There are just breasts for our man to look at. And the on-screen talent is quite impressive.

Surprisingly, this, Meyer's first, is a well photographed movie. The ladies are well lit, the editing crisp, good pacing, and the overall craft well done. Citizen Kane this is not, but take it for what it is: Cheesecake pornography. Remove the fleshy elements and you don't just have less of a film, you basically don't have a film. That said, AMRU 3.
Posted by Fred Theilig at 8:36 PM No comments: 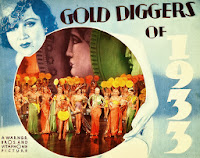 Showgirls are in a musical that is shut down before it even opens. Behind in the rent, they have to steal their neighbor's milk for breakfast. The depression is hard. When they learn that an old employer is putting on a new show, they fall over themselves trying to get the role. And they are hired! With one problem: no money. Details.

When the songwriter boyfriend of one of the girls provides the funds, they are all suspicious how he came up with the bread (spoiler alert: he's a secret millionaire!)

Anyhow, the executor of dreamy's fortune disapproves of this budding romance, they try to nip it in the ... well, bud. The ladies don't take too kindly to the implication, so the game is afoot!

Somewhat witty musical romantic comedy with a little bite, replete with ridiculous Busby Berkeley signature numbers. Ginger Rogers had a fairly small role, but does get to sing "We're In the Money" including a verse sung in pig latin. The almost eerie closeup gives evidence that depression toothpaste was not as effective as the modern counterpart.

Much of the movie revolves around Joan Blondell, Ruby Keeler, and Aline MacMahon's characters as they try to pull a fast one on the men. Having initially seen Blondell only in later films (Desk Set and The Cincinnati Kid), it's surprising to see her as a young hottie. Nine year old Billy Barty was absolutely creepy dressed as a baby. Gold Diggers is an excellent example of pre-code Hollywood. It wasn't afraid to discuss real issues with women wearing over sized lingerie. And one of the musical numbers gives us a little more.

Not a fan of musicals, I haven't made a secret of that. And the over-the-top production numbers aren't exactly my cup of tea either. However, the fast pace, interesting story, and other elements, made it definitely worth watching. AMRU 3.5.

So, what exactly did they mean by "Pettin' in the Park" anyhow?
Posted by Fred Theilig at 9:03 PM No comments:

A newlywed couple stop at a spooky castle to visit the bride's eccentric cousins. Only, they are dead. Well, kinda. Either it's gossip from the villagers, or they are vampires (shuush ... they're vampires!) Anyhow, there are lots of story and character details that are quite boring, and nobody wants me to go into any serious detail anyhow. Let's hit the highlights.

There's a meh-looking travelling vampire chick that killed the foppish cousins (who in life were vampire hunters!) and now has control over them. There's the two servants which I was never sure were vampires or not. They walk around with stupid looks on their faces and say little. There's a woman who was in love with both cousins who gets killed Austin Powers fembot style. And much of the story consists of bride disappearing, husband witnessing a strange and disturbing ceremony, then finds wifey asleep in bed. He seems to need a lot of clues before he catches on.

Anyhow, what made this movie tolerable is that whenever it would slow and tedious, someone would take their blouse off and interest would perk back up. I'm sure the original French version was cut down. It took seven years for it to reach the Americas and as some of the scenes contained unexplained characters or made no sense whatsoever. I'm not so sure the directors cut would have been worth a longer run time. It was over 90 minutes as it was.

The French title was Le Frisson des Vampires which google tells me means something like the Thrill of the vampires, which makes more sense than Shiver, but I just don't feel like being the title-nazi today. Having a title that made sense wouldn't seem to fit here anyhow. Note that there's a fair amount of nudity here, if you are into such things (I am into such things). Director Jean Rollin made a living making such stuff and is revered in some circles.

The surrealist style gives it an art house appeal as well as providing a plausible excuse why the characters behave in a completely unrealistic manner. But that, and the language barrier, does make it hard to relate with the characters. Jean Rollin fans need not offense if I don't care for his style, but I don't care for his style. This was fairly early in his career and will keep an open mind if another crawls across my screen at some point.

File this sucker under soft-core surrealist horror. Story, dialog, acting, all terrible. Some of the visual elements were at least interesting, what with vampire chick climbing out of a clock. And it also had one bona fide startle moment. However, remove the nudity and you remove almost all appeal. AMRU 2.5.

Posted by Fred Theilig at 10:30 PM No comments: