Still not sure what to make of this one. An early 30's horror movie. That should be right in my wheel house. You'd think I wouldn't have to turn it off half way because it was putting me to sleep, but that's what happened. I finished it up the following night.

This is the story of Allan Gray, a young man obsessed with the occult, who happens on an Inn where he finds evidence of a Vampyr! First, in the middle of the night, some old dude saunters into his room and leaves a package with a note that it should be opened in the event of his death. Then he follows around shadows while they go and .... I don't know what they are doing. Eventually the old dude is shot by a shadow, a young woman becomes sick, and lots of surreal scenes are shot using primitive camera techniques.

This is not an easy movie to watch. Although it's not a silent film, it might as well have been. Most of the story is revealed in title cards using a hard to read gothic font and there is almost no dialog. Characters are introduced without explanation and the story line is convoluted at best.

Still, the movie has some merit. Very stylish and atmospheric, it scores high points for originality. The disembodied shadows running around was an interesting technique and the use of double exposures and backwards film may have been avant garde back then. But the pacing was tedious and the action non-existent. Thankfully it was only 72 minutes.

The movie could stand a second viewing, if for no other reason than to figure out what the hell was going on. I can't imagine seeing it again, unless I happen upon a fully restored showing at a film festival. The Netflix streaming copy is in need of some TLC. AMRU 3.

Before I end, take a look at the wikipedia entry for the movie. A lot went on with the making that I found interesting. Very low budget using non-actors, it was filmed for three languages and constantly re-edited. The cast stayed at the inn it was filmed in, which proved very uncomfortable. Oh, and the director ended up in a mental hospital. So it goes.
Posted by Fred Theilig at 4:57 PM No comments:

Stew Smith (Robert Williams) is a newspaper reporter covering a society story. Seems a foolish young man of breeding and culture made some hard to keep promises to a lowly chorus girl, and she has the love letters to prove it. Stew meets with the Schuylers to get the story, where he meets our titular character.

Funny, isn't it how whenever someone refers to a character for whom the movie is named as "titular", that seldom that someone is either male or flat-chested. Apropos of nothing, that character is played by our very own Jean Harlow.

Boy meets Girl, boy earns the trust and respect of girl, boy MARRIES girl, girl's family approves not at all of the situation, work-a-day boy becomes a fish out of water, or more appropriately, a "Bird in a Gilded Cage", and starts to go a little nuts. We've seen the story a million times.

Jean was the biggest name and, as indicated earlier, the "titular" character, but the movie is really about Stew and Gallagher (Loretta Young). Gallagher is a woman, but not a real woman. She's one of the guys, a real pal. Seems our Stew never noticed how Gallagher absolutely glowed in soft focus. Live and learn.

Now, I didn't know anything about Loretta Young. I found out later that she had a child out of wedlock with Clark Gable (while he was still married, no less!) and is best remembered for her TV series. Back in the day, however, she was hot. 18 when the movie was released, she stood up to the more veteran actors and out shined Harlow herself.

It was kinda nice to go back to Capra thumbing his nose at society muck-a-mucks, and the performance of Williams was strong (and who doesn't like a little depression jiggle), but the movie left me somewhat flat. A little punching up of the script would have served it well. AMRU 3.

We all know that Capra and Young went on to long successful careers in cinema, and that Harlow went on to a tragic and short life, but Williams wins the cupie doll today. The sharp and witty reporter dropped dead of appendicitis three days after the premiere. So it goes.

"Yea, I know those bluenoses. Their ancestors refused to come over on the Mayflower because they didn't want to rub elbows with the tourists... So they swam over!"

Posted by Fred Theilig at 8:49 PM No comments:

Smack dab in the middle of Hollywood's obsession with New York City's Bowery district is Bowery at Midnight. Bela Lugosi is respected family man and phychology professor Frederick Brenner. But by night he leads a double life as kindly soup kitchen operator Karl Wagner. But later at night he leads a triple life as criminal mastermind, also Karl Wagner.

Apparently Bela uses the soup kitchen to recruit criminals to explore his own fascination of crime and murder. When does this man sleep? When one of his students visits the kitchen in order to surprise his hottie fiancee, he is surprised himself to bump into Prof Bela. Bela is eager to further his students education by bumping him off. Wonder how things will work out?

Not much of a movie. The only reason why I watched it was because another Lugosi movie I intended to watch on Netflix streaming was going offline, and the last couple days it was available, Netflix was "performing maintenance" on the title. Well, it's gone now and I never got to see it.

Time to split hairs. What is "horror"? Making the audience feel fear is not enough, otherwise many movies would fit the bill, plus quite a few baseball games. No, there must be an element of evil or the supernatural. Sure, Bela was evil, but if Jimmy Cagney played the role, there would be no doubt that this is a crime drama, not a horror flick. But because Bela plays the staring role, it's horror. No dice, pal. Didn't work for The Bat either.

Now, there is one horror element. According to IMDB, this is a Zombie film. Sure, add some zombies and Bam, you got yourself a bona fide horror film. Problem is, the zombies (if that's what they are), were added into the script as seamlessly as attaching a third arm.

Come to think of it, THAT would be a good horror element. But I speak (type) figuratively. Suddenly (spoilers ...) all of the people Bela killed appear in the basement to seek revenge. Were they really dead? Were they resurrected? Who cares, this movie stinks.

Not a horror film. Not a zombie movie. Barely watchable at the best of times. I feel obligated to give it an AMRU 2.5 because it's better than that Revolt of the Zombies trash. 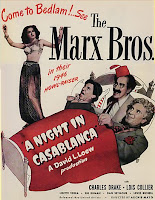 This was an experiment. Would the humor of the Marx Brothers translate for a 14 year old boy? Would the Brothers be as funny as I remember?

A young soldier is convinced Nazi treasure (the best kind) is hidden someplace in a Casablanca hotel, and he is determined to find it. Unfortunately, so are some former Nazis. The hotel manager is murdered by the Nazi in an attempt to take over the hotel, and gaining full access to search. Unfortunately for him, a Mister Ronald Kornblow (Groucho Marx) is brought in. His brothers (the funny ones, anyhow) tag along.

Antics ensue. Kornblow tries to woo hot Nazi chick (the best kind), soldier is arrested as a suspected Nazi, Nazi tries to knock off Kornblow, and a fun time is had by all.

Like with Mae West, it's hard to appreciate the originality of humor after it's been duplicated a million times over. Even with that perspective, I couldn't find many of the sight gags funny. What chance did my son? But slowly, over time, he started to appreciate what Groucho was doing. The biting remarks, and comedic put downs:


"You know, I think you are the most beautiful woman in the whole world."
"Do you really?"
"No, but I don't mind lying if it'll get me somewhere."


In the end, my son was won over. I'm sure it's not the best Marx Brothers film, but it was fun. Groucho referred to it as the last Marx Bros film, but it wasn't. Love Happy (1949) with Marilyn Monroe was, but he hated that movie. AMRU 3.5. I'm putting The Cocoanuts onto my Netflix queue.
Posted by Fred Theilig at 5:33 PM No comments: