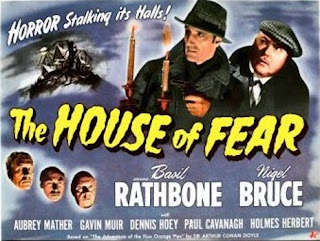 Members of a rich mans club that meet in a spooky mansion in the Scottish country one by one receive an anonymous letter that contain only orange seeds. Shortly thereafter, they die tragically. Also, they have a spooky housekeeper. Holmes and Watson investigate.

It seems that each member had their life insurance policies changed so that the rest of the club is the beneficiary. Holmes recognizes one as a Doctor who was acquitted for killing his wife, so he becomes the all-too-obvious suspect. The House of Fear is based on but does not at all resemble Doyle’s “The Five Orange Pips”, which is a story and not the name of the world's most caucasian R&B band.

Other than our heroic duo the only recurring character in these films is the incompetent cockney Inspector Lestrade (Dennis Hoey). Why a London cop is investigating a Scottish crime is the real mystery. In all he appears in six episodes. Doctor Suspect is played by Paul Cavanaugh, who made a career of playing dapper Englishman with a questionable past. He’ll be in a couple more of these.

Better than some and sure not to disappoint, but Boy-Howdy am I tired of these films. Time to move on for a while. With six more left, my self-imposed end of year deadline is in question. I shan’t lose sleep over it. October is for Horror and that will begin shortly. But for now, AMRU 3.5. I want a spooky mansion in the Scottish country.

Posted by Fred Theilig at 11:18 PM No comments: 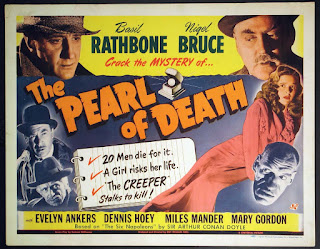 Sherlock Holmes (Basil Rathbone) learns that notorious thief Giles Conover intends to steal the famous Pearl of Death (think Hope diamond except it’s a grey marble). And through his bumbling (you heard me right!) Conover manages to do just that. Conover ditches the pearl before being apprehended and our heroes try to locate it before the bad guys do.

One of the better episodes, but not a solid mystery in the traditional sense. The only real mystery was where Conover hid the pearl, and we were in the process of figuring that out fairly early. Still, a better story and me sleeping through the midsection is no reflection on it.

Evelyn Ankers plays the bad guy’s blond helper chick. She did a lot of Universal during the 40’s. She was the love interest in The Wolf Man, Elsa Frankenstein in Ghost of, and also in another Sherlock flick. Sadly, she would turn 40 and have to retire. Now I turn your attention to prolific character actor Ian Wolfe.

Ian Wolfe played the elderly shopkeeper, doctor, councilman, whatever in just about everything. If you don’t immediately recognize him then get yourself checked for face blindness immediately. He has over 300 acting credits, more than half feature films. This is the seventh film of his I’ve covered here and has appeared in a bunch more I should see, and also another Sherlock flick. Fourteen of his films were nominated for best picture with three winning. He played different characters in two episodes of Star Trek. He started doing TV in the late 40’s and continued until the late 80’s. His last film was Dick Tracy at age 94. Seriously, he was in everything.

The Pearl of Death (no Sherlock Holmes and ...) provides a fair amount of mystery along with the regular elements we have come to expect. I would be negligent if I didn’t admit that I am growing a little tired of the series, but on the whole they are solid entertainment. AMRU 3.5.


“If it isn't, I shall retire to Sussex and keep bees.”

Posted by Fred Theilig at 12:57 AM No comments: 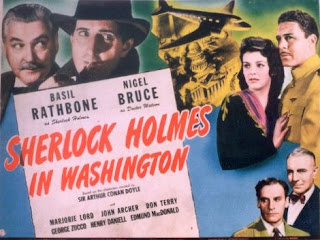 A British secret agent flies to Washington DC to deliver top secret plans but is captured along the way. Sounds like a case for Sherlock Holmes (Basil Rathbone), and to a lesser extent, Doctor Watson (Nigel Bruce). George Zucco plays a bad guy yet again.

Not much of a mystery this time. No big third act reveal. Minor mysteries, like where did he hid the microfilm, are revealed early in the second act. From that point all we have is a cop drama. Since we know Homes wins in the end (oh, spoiler alert!) it’s not terribly interesting.

Henry Daniell plays a secondary baddie to Zucco’s big boss. I’ve seen him in six other films including Voice of Terror. He’ll be in another Holmes film. I presume its The Sea Hawk (1940) he is most known for, but he has appeared in a ton of excellent films.

The real headline here is that our heroes actually visit America. He even takes a tour of DC. I still find it slightly jarring to see him in the twentieth century, so I wasn't charmed by their jaunt across the pond. I am guessing WWII had something to do with that decision.

The consistency of tone of these films makes it much like a TV show. Even the background actors return in different roles. As remarkable as the consistency is, clearly some episodes are better than others. In Washington was fine, but otherwise unremarkable. AMRU 3.

Posted by Fred Theilig at 11:02 PM No comments: 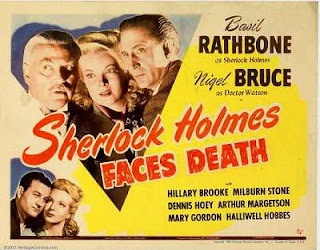 Dr. Watson (Nigel Bruce) volunteers at the spooky Musgrave Mansion which was opened up to returning soldiers recovering from physical injuries and shell-shock (simple, honest, direct language - two syllables). First his assistant is attacked, then members of the Musgrave family. Holmes (Basil Rathbone) is brought in to solve the mystery.

Here is a better than fair mystery. Every character except our heroes are suspects. Add to that the mysterious Musgrave family ritual, and how it all ties together. Once the story resolves, everything makes sense and we aren’t left feeling cheated. Sadly, this isn’t often the case with B movie mysteries. I’m looking at you, Charlie Chan.

Loosely based on Sir Doyle's The Adventure of the Musgrave Ritual, it takes many elements and invents many more. Principally regarding the injured war veterans. Originally the mystery revolved around disappearing domestics, which also happens. A young Peter Lawford can be seen in a bar. In the movie, I mean.

The tone and humor we have come to expect are all present in Sherlock Holmes Faces Death and the mystery element is very satisfying. Maybe the best in the series so far. AMRU 4.

Posted by Fred Theilig at 12:45 AM No comments: