Writer Holly Martins (Joseph Cotten) travels to Vienna, still ravaged by the war, to visit his boyhood friend Harry Lime (Orson Welles). It seems Holly's pulp novels aren't selling all that well and jumped at the opportunity to mooch off his old friend. Sadly for him, good 'oll Harry is dead. Seems he walked out in front of a truck. Bad news for Holly.

The local police chief, who didn't seem to have bent too far backwards investigating the death, isn't too torn up over it. Seems he has quite a lower opinion of Lime than Holly. Something to do with penicillin and the black market. So, with nothing better to do, and to redeem the good name of his buddy, he decides to start asking questions. Soon he discovers discrepancies in the police report. It says two men helped Lime to the side of the road but a witness clearly saw three. Maybe Lime's death was no accident. Maybe it was murder. And the first person to ask is The Third Man.

Happen to know what a zither is? If not, it's a traditional eastern European stringed instrument that makes a uniquely annoying sound, certainly not the kind one would master in hopes of impressing the lady-folk. In the world of western cinema, there is room for exactly one film to make exclusive use of it, and this is that film. If there exists another movie in creation that uses this instrument exclusively, that movie should be torn up, burned, then the ashes fed to rabid snakes.

That said, this noir film seems to work well with the comically upbeat zither. In fact, most of the movie works well. The acting was fine, the setting and atmosphere were great, the story had me guessing, and the hottie (Alda Valli as Lime's grieving girlfriend) was hot.

Not wanting to spoil anything, I'm going to leave it there. It's a very good mystery that bears rewatching. AMRU 4.


"Like the fella says, in Italy for 30 years under the Borgias they had warfare, terror, murder, and bloodshed, but they produced Michelangelo, Leonardo da Vinci, and the Renaissance. In Switzerland they had brotherly love - they had 500 years of democracy and peace, and what did that produce? The cuckoo clock."

Posted by Fred Theilig at 11:31 PM No comments:

Hunky Leo (Randolph Scott) visits his rich uncle. Uncle has some cock-and-bull story about his ancient ancestor who searched for the Flame of Life, some sort of fountain of youth, somewhere in the Arctic, and how young Leo looks exactly like him. This means Leo has to go hunt for it, along with Uncle's trusty man-servant. Leo plays along because Uncle is going to die soon, and maybe he'll meet a hottie and have an adventure. 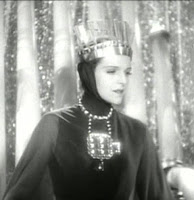 Off they go to the Great White North where they enlist a grumpy guide and his hot daughter. After the guide causes an avalanche that kills everyone except the principle characters, Leo, man-servant, and hottie follow a tunnel into the ice when they are captured by cave men. After some ill timed heroics, our party is rescued and brought to Ming's palace, apparently ruled by the Evil Queen from Snow White (Helen Gahagan).

Actually, it is She. She Who Must Be Obeyed, more formally. See, She had bathed in the Flame of Life and was the lover of Leo's great-great-great-grand whatever, and now she thinks Leo is his reincarnation. All looks good for Hunky Leo. Wonder if his hottie travel companion will complicate things?

Originally this was to be filmed in color, and it would have look spectacular with a little technicolor, what with the sets and elaborate production numbers. But, alas, the budget was cut and color was lost. Unlike Them!, color would have really helped this movie. But what we have is a thrilling action-adventure ... melodrama. For all of the elaborate sets and costumes, the movie is burdened by lots of "feelings" dialog. I don't know how the original book read, but this version (one of about ten) could have benefited from a Heroic Adventure focus.

Definitely interesting, but a second viewing won't be forthcoming. AMRU 3.


"I am yesterday, today, and tomorrow. I am sorrow and longing an hope unfulfilled. I am She Who Must Be Obeyed!"

"No one can say o'll Dugmore ever let a white man down."

Posted by Fred Theilig at 6:28 PM No comments:

Dashing Edward Parker (Richard Arlen) is the victim of a shipwreck. Lucky for him, he is picked up by a passing ship that has a doctor as a passenger. Foolish of him, he punches the captain (Stanley Fields) over how he treated a dog-eared man. So, Captain gets back at him by dropping him off, along with the good doctor and his cargo of exotic animals, at his first port of call instead of taking him back to California, where his hot blond Fiancee' (Leila Hyams) waits patiently for him.

The island's owner, Doctor Moreau (Charles Laughton), isn't too keen to have an unexpected visitor, but appears helpful enough. Maybe Mister Parker can aid him somehow in his research! Gosh, the natives look awfully peculiar ...

This is the film first attempt at H.G. Wells' "The Island of Doctor Moreau", and maybe the best. Wells himself was still alive to hate it and caution people from seeing it. Spoil sport. Anyhow, Paramount was trying to come up with a movie more shocking, more terrifying than anything Universal was producing at the time. They may have over reached. This was after the Hays code was in effect, but before they started enforcing it. Somehow themes of rape, vivisection, and bestiality got through the censors.

The end result is a fantastic movie with great acting and atmosphere to spare. When Paramount tried to re-release it a couple years later, the board said, umm, No. It was banned in Britain for twenty six years. Localities everywhere insisted that various scenes and lines cut ("Do you know what it means to feel like God?") making the movie a distributed patchwork. Luckily, there is a complete version that modern audiences can watch. Under different circumstances, classic horror lists might post Lost Souls above Dracula and Frankenstein (IMdb ranks it higher than Dracula).

And much of the credit goes to Laughton. No conflicted mad scientist is he. He simply LOVES what he does and doesn't for a moment doubt the outcome. Know that feeling you get when you're wearing something absolutely luxurious to the touch and eat something decadently delicious? That's how Moreau feels when he carves up living beings without anesthesia and listens to them scream. Simply delightful.

Bela Lugosi had a small but exceptional role as the Sayer of the Law. Not willing to wear makeup to be Frankenstein, it would seem he recanted to be all but indistinguishable here, recognizable only by his voice. Mark this as one of his best rolls. Also, recognize the name of Hyams? She also appeared in another banned pre-code movie, Freaks, which I recently watched again. Available on Amazon Prime. Luckily the controversy didn't stunt her career. She continued to work until the ripe old age of 31.

Before returning the disk to the library, I watched all of the commentary (man, does Landis love the sound of his own voice!) and rewatched it with commentary (in a mob scene, a beast-man accidentally lights the head of another beast-man!). Unfortunately that was before I purchased my Samsung LED. The picture on my old CRT was dying and some of the subtleties of the movie were lost. AMRU 4.5.

Posted by Fred Theilig at 5:14 PM No comments: