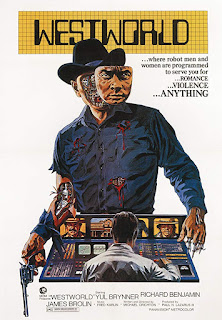 Delos offers fantasy vacations at three themed destinations: Medieval World, Roman World, and Westworld. Or protagonist chooses the third, where guests can participate in fun activities like bar fights, drinking terrible whiskey, and being threatened with murder. Oh, yea, and there are prostitutes. Can’t forget them. Guess what? Things go haywire. Familiar with the old 'super fancy amusement park for the filthy rich breaks down and people die' trope? Writer/director Michael Crichton sure was.

But give the man credit. In this high concept if somewhat lackluster film are the seeds of Halloween (1978) and The Terminator (1984), not to mention Jurassic Park. This was also the first ever feature to use computer graphics and maybe the first to use a computer virus as a plot point.

Our story follows beta male Peter (Richard Benjamin) as he visits the exclusive resort with his hunky friend John (Josh Brolin’s dad). Recently divorced Peter has a hard time getting into the spirit of things until he tries out Nurse Chapel’s brothel (one night in Westworld makes a hard man humble). Then the attractions begin to malfunction. But before total chaos reigns, the technical team decides to upgrade the nasty gunslinger character (Yul Brynner) with super powers. Seemed reasonable at the time.

Not a bad film overall, but not without flaws. It’s a little slow at times and there are many technical plot holes one must suspend. It’s real legacy are the high concept ideas. There was a short lived TV series called Beyond Westworld that tanked, and Arnold even was in talks to do a remake when governorship saved us from that fate. Never saw the HBO series. Is it any good? AMRU 3.

Posted by Fred Theilig at 11:03 AM No comments: 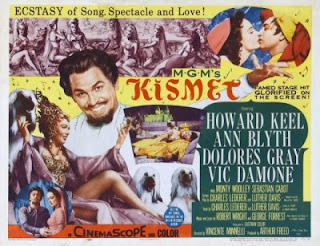 A sharp-tongued poet (Howard Keel), who somehow made it to adulthood before learning you can’t make money from poetry, is mistaken for a beggar. He goes along with it. A notorious thief mistakes him for the man who put a curse on him that lost him his son, so he cons his way into being paid to release the curse. Things are going great but soon he is arrested by the Great and Mighty Wazir (Mr. French), his daughter (Ann Blyth) falls in love, and coincidences keep us all so very entertained.

Kismet is the forth and best remembered version of the 1911 play of the same name. Stylistically it falls in line with a great many musicals made around that time. Brightly colored, expansive sets, heavily rehearsed period pieces with family friendly stories that also border on the naughty. See Seven Brides, Kiss me Kate, Brigadoon. Grand spectacles, if you’re into that sort of thing.

If you’re vexed by all the honkies in Arabia remember that this is 1955 and suspension of disbelief rules the day. Particularly out of place is the Grand Caliph and teen heartthrob Vic Damone. Why he wasn’t in more films is wondered by nobody. But don’t judge him too harshly. He’s just a teenager in love.

Not a bad thing if you’re into the genre. I tolerated it well. I expected an “Oh, that’s where that song comes from” moment but there was none. People who whistle show tunes will be more familiar. But for me, AMRU 3.

Posted by Fred Theilig at 2:12 PM No comments: