The marriage of under aged girls in the Ozarks is a terrible problem. Who will spread the word regarding this awful practice? I know, an exploitation film will!

Like so many early exploitation films, they tantalize audiences with what they pretend to condemn. Here, it's young Jennie in the buff. And the famous skinny dip scene was both significantly long and, as the MST3K folks said, disturbing. In fact, because of those comments in particular, I was hesitant to watch this thing. But I am curious about the old "pre-code" films (not one, I know), and Amazon Prime had it available, so what the hell. But like MST3k, I too should have skipped it.

From an acting/story/dialog standpoint, it was more than a little sub-par. Take into considering the poor audio and video quality of the public domain copy, not the best viewing experience. Following the story line or even telling some of the actors apart proved to be a chore. But the sets looked authentic enough, which is to say they even totally failed at totally failing at absolutely everything.

But if you feel weird ogling the 11 year old Jennie, rest assured that at the time of filming actress Shirley Mills was the ripe old age of twelve. Not entertaining, not historically significant, not even titillating. The best thing I can say was that it wasn't painful. AMRU 2.
Posted by Fred Theilig at 11:36 PM No comments: 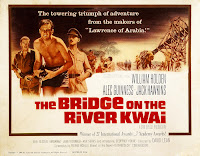 Colonel Saito (Sessue Hayakawa) needs to build a bridge in short order and uses prisoners of war as labor, officers included. New recruit British Colonel Nicholson (Alec Guinness) is all for building the bridge, good for morale, you know - pip pip!, but takes exception to the part about him doing some heavy lifting. The two strong headed leaders play a war of brinkmanship. This amuses American Major Shears (William Holden), who decides to high-tail it.

Nicholson obsesses on building the bridge his way, Saito is so pressed for time and has to concede, and Shears, rescued by the British, is voluntold to embark on an operation to destroy the same bridge. A fun time is had by all.

Bridge on the River Kwai is a wonderful character study. The three main characters (plus others) are fundamentally different in their perspective. Duty and self interest collide with obsession. Watching them interact was great. Some of the best acting I've seen yet. Sure, it's long. Sure, not much in the hot babe department. Watch it anyways. Now let's talk about the bridge.

The movie is based on a true story. Some details were changed to make it a fictitious story. The Japanese Colonel wasn't all mean, the bridge wasn't built in three months, and the whole ending part didn't happen at all. In fact, historians took exception to a great many things. Please don't get hung up on such matters and think of it as a great movie BASED on a true story. Like Lord of the Rings. AMRU 4.


"I know how you feel, but there's always the unexpected, isn't there"

Posted by Fred Theilig at 3:06 AM No comments: