It's funny. I sometimes browse IMDB, progressing from one thought to another. Eventually I was reading about Joan Rivers. I discovered that she appeared in a 1968 film, The Swimmer. I was curious.

Burt Lancaster is Ned Merrill. He shows up at someones splended country home in a bathing suit and jumps into the pool. The homeowners are very happy to see him and offer him a drink. They talk and it is clear that Neddy is a very popular dude. He's been out of touch with the social scene for a while and it's not clear why. Talk turns, as it frequently does, to swimming pools. He gets the idea that he will swim home. He will jog from house to house and swim their pool until he gets home. Every boys dream.

With every house he visits we learn a little more about his situation and character. Slowly, the reception to the interloper in the pool gets chillier and chillier, and drinks become harder to come by. I will say no more, lest I spoil.

It was the forth of fifth house that I get to see Joan Rivers. I remember the Joan from the 80's back when she was convinced she was bigger than Carson. I also know the Joan from today, the bizzaro alien creature with the dessicated face. What did Joan from the 1960's look like? She was about 33 during filming. I'll have you know she appeared like a regular member of the species. Not a babe by a long shot, but, well, depending on the situation and alcohol consumption, not out of the question.

Who was a babe was Janet Landgard, who played hot baby-sitter Julie Ann Hooper. She was a teen when the movie was filmed and looked great in a two-piece. Her movie career dried up something quick.

When the movie was done, I was thinking totally a 3.0. But as time passes, I actually have considered seeing it again. It's rather haunting how the progression was handled. The odd looks people give Ned when he says some things, the details that come out. All of it builds rather well. AMRU 3.5. 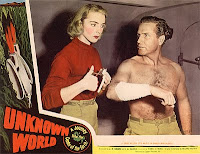 A band of scientists, convinced the world faces certain nuclear annihilation, decides the only logical thing would be to stick their heads in the sand. Literally.

Financed by the playboy son of a newspaper tycoon, they construct an art deco vehicle to tunnel to the earth's core searching for a subterranean Eden. What wondrous things will they find on the way?

The movie would have been a little better had they found some wondrous things along the way. In fact, all they find are boulders, poisonous gas, and plenty of reasons to bicker. No mole people, no hot Amazonians, just stiff science types walking around carlsbad caverns in black and white. They start by dispelling the silly old wives tale that the earth is made up of magma and a solid core. Actually, it's made up of caverns and passageways for great adventure to happen. Or boring subplots, whichever is cheaper to film.

Do our intrepid travellers find an underground Eden where humanity can restart, and not bring their weapons? Do they all perish trying? Will you be awake at the end of the movie? Won't say, but if you have any sense, you won't try to find out. Quite skippable. Slow pace, little real action, poor video quality. AMRU 2.
Posted by Fred Theilig at 6:30 PM No comments:

I requested Tarantula, but what I got was a three disk set of five classic Universal sci-fi and horror. Clearly the dog of the bunch was Monster on the Campus.

Dashing professor Donald Blake (Arthur Franz) convinces the university to purchase a coelacanth, which he alternatingly pronounces Sea-locanth and Sil-ocanth. Unbeknown to our dear professor, this freak of evolution was preserved using gamma radiation! The same stuff David Banner would experiment with years later! When a frat dog drinks the blood of this fish (ew!) he reverts back to an earlier evolutionary stage. For a while. Then he's fine.

Our good doctor decides to carry the fish by putting his hand into it's mouth, thus cutting himself. Then when he tries to move the box filled with foul fish water (irradiated prehistoric fish blood water), he puts his injured hand RIGHT INTO THE SCUM! Good going, captain cross-contamination! Maybe wash the hand? No, you've go to go straight to a formal event. No time to shower.

When he starts feeling ill (I'm starting to feel ill myself), a hot assistant drives him home. Then a strange metamorphosis overtakes him! He becomes a violent idiot wearing a rubber mask! Well, he wakes up and the assistant is dead and he has no memory.

I could tell you about the second time he stupidly contaminates himself and causes another death, but we can take it as read, can't we? This is a Universal picture directed by Jack Arnold, so we might think it's a well made thriller. We would be wrong. It's title may lead us to believe it's chuck full of campy goodness, but no such luck. The only students that have speaking rolls are Troy Donahue as a vacant frat boy and his bland girlfriend. This movie is a stinker.

Testimony to this movie's staying power is that it took me twenty minutes into it to realize that I had seen it already only a couple years ago. It was on my public domain horror set. I remembered little except the Doctor Jekyll meets Professor Darwin subject matter.

Universal executives got together one day. What scares people, they asked. We've done aliens, giant bugs, monsters from the deep, and even a dude shrinking from radiation. What can we do now?

"I know!" a young board member said. "Rocks!" They all agreed that rocks were, indeed, very frightening.

I know what would have been more frightening. Anything OTHER than rocks. Despite the title, they're not even Rock Monsters. They are just rock crystals that grow very fast and kill people when they come in contact with them. They move by growing very tall, then falling over, breaking into tiny pieces, then growing again. Please.

To be fair, the script, acting, and overall production quality was up to Universal standards. It failed principally because the monster premise was lame. And it should be noted, it was an almost complete copy of Tarantula. Allow me to explain:

I wonder how I would have viewed the two movies had I seen them in reverse order. Either way, Tarantula was a better film. Monolith Monsters was, however, a very watchable movie and I still give it an AMRU of 3. The rocks kill by sucking the silicon out of the body, making them hard as a rock. Kinda interesting, but nothing compared to being eaten by a giant spider.
Posted by Fred Theilig at 1:31 PM No comments:

Scott Carey and wife are relaxing on his brother's boat. When Scott sends his wife below deck to fetch refreshments, a mysterious white cloud passes over him. Strange, but he thinks nothing of it. Six months later Scott starts to notice that his clothes don't fit anymore. Slowly he comes to the realization that he is slowly shrinking.

We watch as he comes to terms with his life and is confronted with more and more physical obsticles. His outlook becomes sour, except for a brief time when he was banging a hot midget.

Look where Sci-Fi brings us. We've explored space, the distant reaches of our planet, deep underground, and now the comonplace becomes fraught with danger. That reminds me, I've got to add Fantastic Voyage to my list.

Another well made Universal film. I never saw it as a kid and I'm glad I did. I remember that Tommy Chong quote from It Came from Hollywood. Look it up. AMRU 3.5.
Posted by Fred Theilig at 4:26 PM No comments: