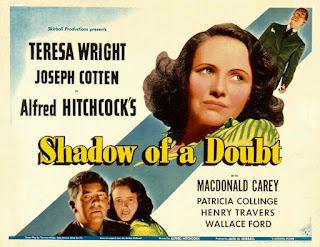 Charlie (Joseph Cotten) is being followed by investigators, so he skips town and visits his sister’s family. They are thrilled to have him visit until his niece (also Charlie) starts to suspect that he isn’t the man everyone believes him to be.

The Doubt I was to have a Shadow of was removed by the streaming services description of the movie. I know it’s seventy five years old, but shame on Amazon. There’s no excuse for it. Anyhow, the movie is set and filmed in a small California town as young Charlie slowly pieces together the clues to Uncle Charlie’s past. Teresa Wright was downright charming as the small town girl. Young, naive, but strong. Hume Cronyn was also there. So there’s that.

This drama unfolding in idealistic small town America is not short on atmosphere. Director Alfred Hitchcock called it his favorite of his films, and Shadow of a Doubt has a lot to offer. Hitch's first fully Hollywood production, it feels more polished than some of his earlier work. It’s not my favorite of his, but it is in the top five. My mom would have loved it. AMRU 4.

Posted by Fred Theilig at 4:33 PM No comments: