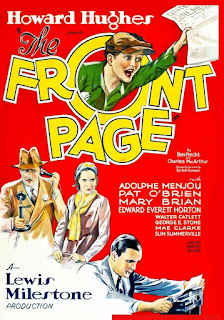 A newspaper reporter is quitting the business to marry his sweetheart, but his editor (Adolphe Menjou) isn’t giving up so easy. As a big story unfolds around them, the editor connives to keep Hildy in the game.

Filled with sharp dialog and quick wit, this stage adaptation was remade nine years later as His Girl Friday with Cary Grant in the lead. The story is principally the same except Hildy was gender bent to be Grant’s ex-wife, a fairly clever twist if you think about it. What Girl Friday had in marquee stars and Hollywood polish, The Front Page matched with a darker tone and pre-code edginess. The internet strongly prefers the Grant version but I liked it only a bit more. Billy Wilder directed another version in 1974 with Walter Matthau and Jack Lemmon which has to be pretty good. Additionally there are four TV versions and a Burt Reynolds vehicle.

Let’s talk about Adolphe Menjou. I just recently saw him in A Star is Born (1937) in which I barely remember him and also in A Farewell to Arms (1932) which I don’t remember him at all. To be fair, that was a while ago. Those were character roles but he is front and center in The Front Page. His career went from silent film villain, to ladies man, to background character. A healthy career filled with ‘A’ pictures. His roles diminished as things went on but when you spend your life crusading against Hollywood Commies and other phantoms, people don’t offer you the juiciest roles.

There was a surprising amount of casual racism. Reporters call in stories into their news desk that don’t pertain to the story at hand but provide atmosphere to the environment. Sometimes those stories involve language surprising to my puritanical ears. Equal parts hate and quaint. When Hildy tells the guys he’s getting married they ask if she is white. When the editor talks about a wife he loved, he says he “treated her white”. What does that even mean? The message I took was that while the reporters were hand-to-mouth working stiffs, society afforded an even lower caste for them to look down upon.

Another interesting pre-code remnant are pictures of topless women seen around the newsroom, particularly near the door. A fussy newsman orders a sandwich using “gluten bread”, comedically emphasizing the ‘gluten’, so I was curious what that could mean in 1931. Was there non-gluten bread back then? Googling gluten bread here in the 21st doesn’t produce useful results, so my question was left unanswered.

Other than the fact that audio equipment of the day required the actors to shout their lines, the movie plays very well. It was clever, charming, and surprisingly well shot. Oh, and the racism. AMRU 3.5.


“Williams is a poor bird who had the tough luck to kill a colored policeman in a town where the colored vote counts!”

Posted by Fred Theilig at 10:23 PM No comments: 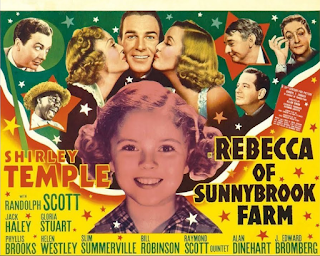 A radio station is looking for a Little Miss America, a girl to sing while pitching bran flakes, and little Rebecca (Shirley Temple) is exactly who they are looking for. But step-dad Uncle Charlie thinks they are passing on her so he deposits her with her dead mom’s sister who will have nothing to do with this show business talk. There she learns to love country life and becomes friends with the neighbor (Randolph Scott!) who is searching for that little girl his incompetent assistant allowed to leave the studio before signing a bran flakes contract.

Our incompetent assistant is played by Jack Haley, whom some may remember as the Tin Man. Haley himself said that if it wasn’t for that role, nobody would remember him at all, and I tend to agree. Gloria Stuart played the ingenue/love interest. She was also Old Rose in Titanic. She lived to be a hundred. Also here is dancer Bill Robinson. Bojangles was a great and innovative tap dancer prior to making films. He was paired with Temple for three movies and eeked out a modicum of Hollywood fame.

Rebecca of Sunnybrook Farm is a remake of the Mary Pickford film of the same name. I understand many of Temple’s films were Pickford remakes. Pickford, who frequently played roles much younger than she, was 25 years old when making the original version compared to ten for Temple. Temple was up for the role of Dorothy in The Wizard of Oz, but didn’t get it. She remembered that as a lost opportunity to step out of Pickford’s shadow and do her own films. I wonder if Pickford auditioned.

Early in the film there was a sassy receptionist that I thought was going to be a major character. She wasn’t but I found out why all her scenes were sitting down. At 4’11 she was actually shorter than Shirley. I thought step-dad was going to be a gruff but amiable character but they went in the opposite direction with him. I forget that Demarest didn’t play likable much prior to My Three Sons.

I was looking for another film to see and I wasn’t motivated by anything on the DVR or streaming. I popped on TCM just before the beginning of Rebecca and decided to give it a chance. I Hadn’t seen a Shirley Temple film front to back, maybe ever, so I gave it a try. No part of it was terrible so I ended up seeing the whole film.

Maybe sacrilegious to say but little Shirley was charming, kinda cute, but only talented because she was young. Nobody marveled at her skill and as she matured she outgrew her specialness. Hollywood didn’t turn its back on her any more than she had nothing left to offer. In the end Rebecca was upbeat, well composed, and somewhat charming, but I won’t go out of my way to see another. Well made cotton candy is still cotton candy. AMRU 3.

Posted by Fred Theilig at 9:25 PM No comments: