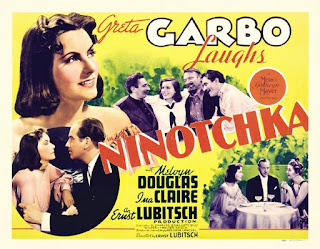 Just before the onset of World War II three Russian operatives arrive in Paris to sell the legally confiscated jewels of the former Grand Duchess. Unfortunate for them, they chose the same hotel that the Grand Duchess (former) herself was staying at. Her lover (Melvyn Douglas) interrupts the sale and makes a claim on them. The operatives are living the Paris lifestyle waiting for the courts to decide, but Soviet government grows impatient and suspicious. They send in their sternest and most serious envoy to take over negotiations, Nina Ivanovna Yakushova (or Ninotchka to her friends, had she any).

A Lubitsch rom-com written (at least partially) by Billy Wilder, how can it go wrong? Greta Garbo, who underwhelmed in Grand Hotel, sparkles. First as the comically humorless Russian agent then as love-lorn and conflicted. She and the Grand Duchess' lover (soon to be former) cross paths without knowing who they are. He takes a fancy to her and she finds him amusing enough. Then things get complicated.

Hey, Bela Lugosi is here! Briefly. He has a quick and unimportant scene late in the film telling Ninotchka to check in with the same three operatives again, this time in Constantinople (not Istanbul). Was he begging for bit parts already?

Wonderfully written, delightfully performed, Ninotchka is a lot of fun. It does seem to lose track and go heavy handed on the Soviet social commentary, but that doesn't spoil a great viewing experience. AMRU 4.


"The last mass trials were a great success. There are going to be fewer but better Russians."

Posted by Fred Theilig at 9:59 PM No comments:

A health food store operator (Woody Allen) goes in for a routine operation and wakes out of cryogenic sleep two hundred years later. Here he finds himself in a dystopian future and involved with the underground trying to overthrow the dear leader. No, it's not that serious.

TCM presenter Robert Osborne said Allen was inspired by silent comedies like Buster Keaton, but I saw way more Chaplin and Marx Brothers here than stoneface. But Allen differed in a more fundamental way from the early comedians. Even when at a physical and economic disadvantage, Keaton, Chaplin, or even the Stooges would control the action. They were active participants in their own predicament. In a real way, they were in charge. Not so with Allen's Miles Monroe. He stumbles around and is directly controlled by the other actors. Everything goes wrong and everything is out of his control. We laugh (if we do) at him bumbling.

Some funny parts and kinda interesting, and it features Diane Keaton back when that was a good thing. But based on it's reputation, it was a disappointment. Silly, slapstick, a few good lines, but sometimes annoying. If this is the best of Allen's early comedies, I don't need to see the rest. AMRU 2.5.


"This stuff tastes awful. I could make a fortune selling it in my health food store."

Posted by Fred Theilig at 6:23 PM No comments: 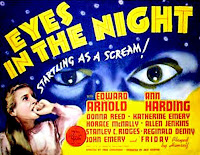 A woman disapproves of her ex-lover knocking boots with her teenage step daughter (Donna Reed). When hot teen meets her oldie boyfriend, she finds him dead and step-mom lurking in the shadows. Who can solve this mystery and prove the innocence of step-mom? A blind detective with his wonder dog Friday, that's who.

This is the second of three Duncan Maclain detective movies, the first apparently lost the the other two starring Edward Arnold (not THAT Edward Arnold) as the eyeless private eye. Author Baynard Kendrick made a dozen Maclain books over two dozen years, but only these made it into film.

Typical of the day, the audience is not left in suspense very long. The only real mystery is what exactly the bad people are after and how will our hero save the day. Everything else plays out exactly as anticipated. Given the genre and premise you just know there's a blind mans bluff scene. I would have been disappointed otherwise. So, how would you handle it? Just turn the camera off and see things as Mac does. Brilliant in its simplicity.

The movie features but doesn't properly use amusing black stereotype Mantan Moreland. He's the butler, of course, but doesn't have nearly enough to do.

This low budget quickie is not without charm. The acting isn't terribly good, the story isn't terribly original, but some of the dialog is amusing, and it's not a bad way to spend 80 minutes on a cold winter night. AMRU 3.
Posted by Fred Theilig at 12:54 AM No comments: 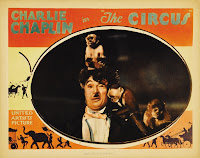 The Tramp joins the circus. Oh, you wanted more? Well, then ... he falls in love with a woman way to young for him and there's this funny horse. Oddly, much else to say ... 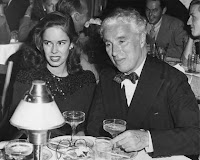 This is Chaplin's last film during the "silent era". He would do two more films in pantomime before retiring the style. Chaplin's second teen bride Lita Grey served him divorce papers during production. oddly, it was Grey who convinced Chaplin to hire Merna Kennedy as leading lady, maybe knowing that she was on the cusp of twenty and therefore too old for Charlie's tastes. The divorce along with fires, stolen equipment, and scratched negatives led Chaplin to a nervous breakdown. If ever he needed to score with an under aged hottie, it was then. Sadly, Oona was fifteen years away. And three years old at the time. Poor Charlie.

There's nothing real special to recommend The Circus. It's well made and has no serious flaws, but that's about it. Some bits were funny, others not so much. Lowly tramp is under appreciated, love triangle, cruel boss. Insert bits on high wire and with animals and presto, circus. No emotional hook like previous Chaplin films. And no time travelers. AMRU 3.
Posted by Fred Theilig at 8:42 PM No comments: