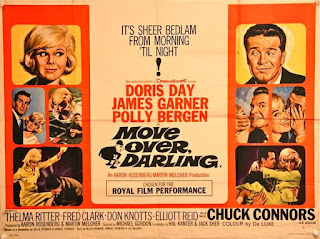 Five years after the death of Nick’s (James Garner) wife Ellen (Doris Day), he marries Bianca (Polly Bergen). Everything is all well and good until Ellen returns from the dead to foul things up.

This was the studio’s second attempt to remake the 1940 Cary Grant/Irene Dunne film. Notoriously they tried filming with Dean Martin, Marilyn Monroe, and Cyd Charisse when Monroe’s erratic behavior caused serious delays that the studio could not tolerate. Then she died. They had about a third of the film in the can before shutting everything down. Here is attempt two with a completely new cast, new title, and a modified script.

Lots of studio contract actors to be seen here. First is Thelma Ritter, whom old friends will remember from Rear Window and All About Eve. Our disgruntled hotel manager today is Fred Clark, who I’ve seen in Sunset Blvd and surprisingly nothing else. He also did a lot of television. Also here is John Astin (you know, Sean’s dad), and Don Knotts who was a TV staple for me growing up. Speaking of TV, Schneider had a small role.

There is something about Doris Day’s body language. She is so wonderfully expressive and you can’t take your eyes off of her. Several years older and never the sex kitten Marilyn was, she was nevertheless much more relatable. I did watch the 37 minutes of Something’s Got to Give edited to a final film as much as possible. While it’s impossible to judge what a completed version would have been, it seemed like I was watching an overall crappier version of the exact same movie. While Marilyn certainly had her charm, she was miscast as a loving mother/sexpot and her acting talent could not hold a candle to Day.

Move Over, Darling is a fine romantic comedy. If I were to criticize it, I’d say it could have been funnier. Also, the entire situation could have been resolved if Nick just told Bianca about Ellen’s return. And I didn’t buy that James Garner would be too timid. Not Jim Rockford. Also, the premise that the marriage would not be consummated until the honeymoon may have been plausible back in 1963, but it was head scratching today.

Slightly better than the original but brings nothing new to the table. Pleasant and easy to watch. AMRU 3.

Posted by Fred Theilig at 10:41 PM No comments: 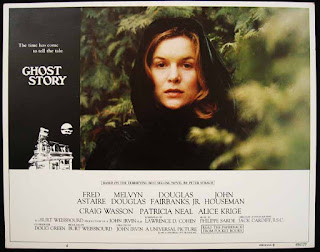 Four old rich men, friends since college, get together to tell each other ghost stories. When one of their sons dies mysteriously in a horrible green-screen effect, his brother tries to unravel the mystery. Spoiler alert: ghosts are involved.

Legend more to my liking Patricia Neal had a supporting role. Old friends will remember her from The Day the Earth Stood Still and Breakfast at Tiffany’s. She didn’t appear in many feature films but I will see her again. Alice Krige, the Borg Queen from First Contact, plays the spoiler alert role. Over the decades she has appeared in a whole pile of stuff that I’m utterly unfamiliar with.

During the climax, with four minutes left on the film, just before the big reveal, the public library DVD failed. Amazon Prime to the rescue. It was free with membership all along.

Ghost Story is a peculiar film. Every scene is a mystery for the viewer to figure out. Awkward dialog, overt sexuality, oppressive score, oddly expressive lighting, and an overall style that had an early-80’s artsy-trippy feel. I found it somewhat reminiscent of the much worse Cat People (1982). Both were films that would make a little more sense on a second viewing, but neither will get that opportunity. AMRU 2.5.
Posted by Fred Theilig at 3:13 PM No comments: