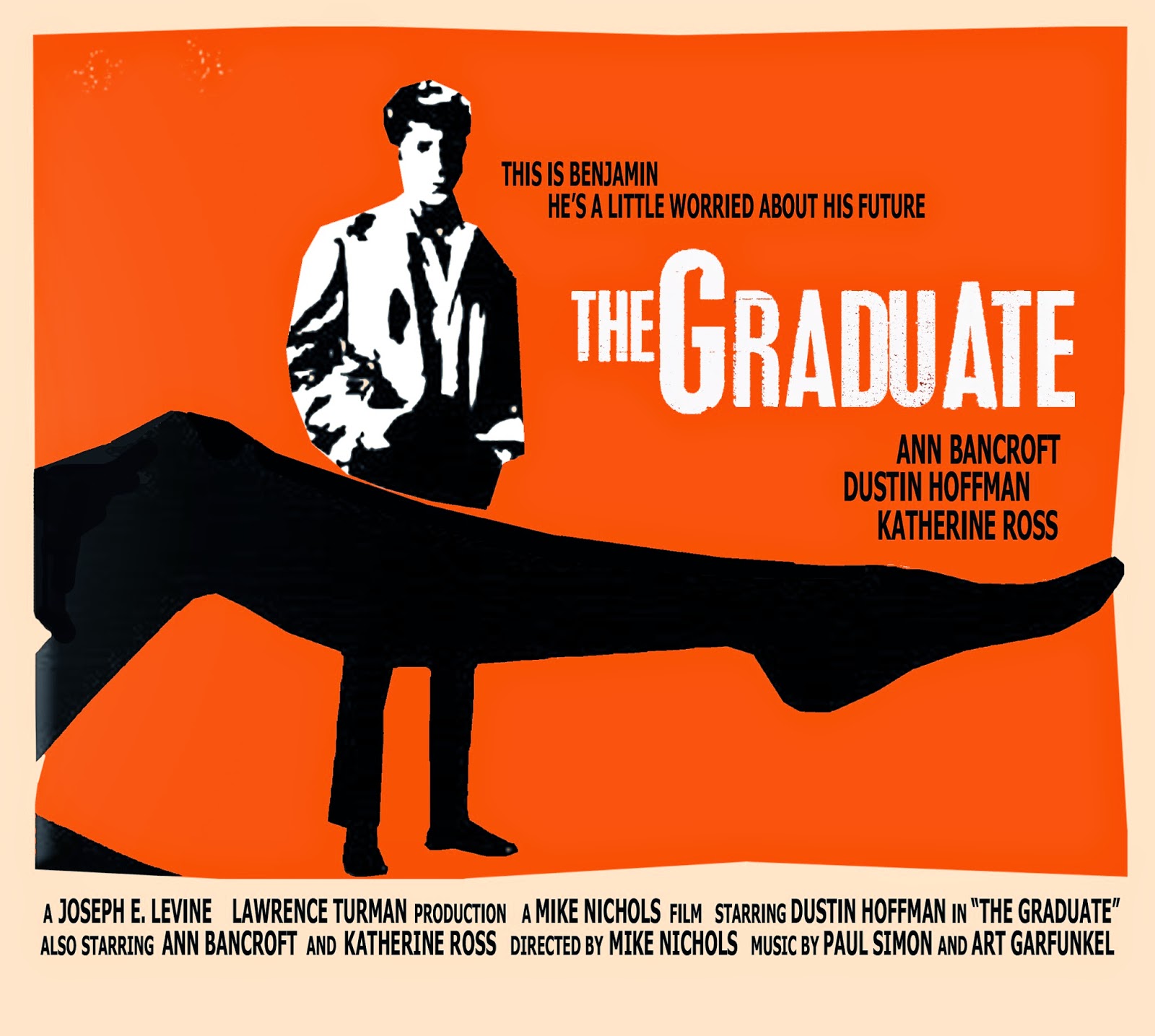 Young Benjamin (Dustin Hoffman) returns from college a track star and academic achiever. His affluent parents want to show him off but he wants to be alone. He is manipulated into a relationship with one of his parents friends (Anne Bancroft) but starts to fall for her daughter. Hilarity ensues.

The Graduate is a study in manipulation. Mrs. Robinson expertly coerces Benjamin into a relationship he clearly is not comfortable with. His parents want nothing more than to show him off like a trained monkey. Benjamin's initial lack of direction and purpose blossoms into full-blown helplessness.

This sometimes cringe-worthy situation is not all the movie has to offer. It sports a wonderfully crisp and poignant script. The advice from Ben's father's well-intentioned friends, his awkwardness at every stage in the affair, all expertly written. Now I know why Buck Henry would host SNL so often way back in the day. The dialog is pitch perfect.

Also noteworthy is the cinematography. Maybe something I wouldn't have noticed a couple years ago, it was quite impressive. Director Mike Nichols expertly filled the frame in a way that told the story as well as the dialog.

I was not familiar with Nichols but looking at his resume, this is an oversight. He has only 22 directorial credits and they range from Who's Afraid of Virginia Woolf to Charlie Wilson's War. Take a gander, quite an impressive list.

And I haven't even touched on the acting. Hoffman as bumbling Benjamin was only six years younger than Bancroft, but you'd never know it. You believe the twenty year age gap. Truly a remarkable piece of film making. Pity it took me this long to see it. AMRU 4.5.

Posted by Fred Theilig at 11:04 PM No comments:

An attempt on the life of a diplomat has left him in a coma. The area of the brain damaged cannot easily be operated on. It's easier, apparently, to shrink down a submarine and crew to microscopic size to make the repairs.

I was mystified how poorly remembered this sci-fi classic is. Until I watched it, that is. It begins with all the techo-cheese of a 60's sci-fi TV show. White noise, spinning tape drives, and, oh yea, that high-tech typewriter. At one point the General walks from fuzzy CRT to CRT to ask a different person on screen what the patient's heart rate or temperature was. Star Trek had a much better grasp on that sort of thing. Still, it ventured into a new realm and showed us something never before seen in the genre: the miracle of the human body at microscopic scale. And what does that magical realm look like? A little like a low rent carnival funhouse.

We marvel at the cast marveling at the miracle of green screen. We gasp in excitement as Raquel Welch is attacked by white blood cells, and the men frantically try to tear them off, mostly from her ample breasts. Every turn a new unexpected challenge awaits. The script was researched well enough that parts were viewed in college medical classes for years.

Fantastic Voyage, while something of a snoozer, did attempt something new, and there is virtue in that. Even if it appears severely dated to modern eyes. Dated, cheesy, and a bit dull, but innovative and slightly smarter than most. AMRU 3.
Posted by Fred Theilig at 8:56 PM No comments: