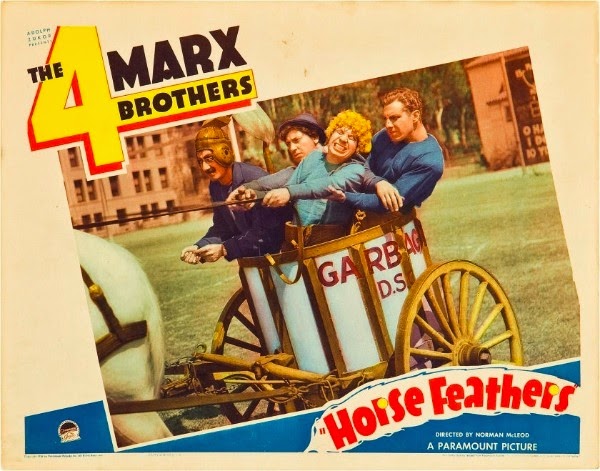 New college president Wagstaff (Groucho) is convinced by his undergrad son Frank (dull brother Zeppo) that what the school needs is a winning football team, and he sends him to a local speakeasy where a few top players hang out. Instead of recruiting ringers, he signs up the speakeasy thug and the dog catcher (Chico and Harpo). Marx style antics ensue.

Story really doesn't matter in a Marx Brothers movie. It's just a framework for them to perform their vaudeville. If you take anything here seriously, then you are missing the point.

Comedy footnote Thelma Todd plays the sizable role. Her career was cut shot because someone murdered her. Interesting to note that TCM presenter Ben Mankiewicz mentioned that his grandfather said he'd rather have their teeth drilled out before working with the brothers again. The Buster Keaton documentary I mentioned before had unkind words about their professionalism as well.

All Marx Brother films are alike, as far as I can tell. They don't fail to entertain, however. Would be nice if the musical numbers were shorter. AMRU 3.5.


"Are you suggesting that I, the president of Huxley College, go into a speakeasy without even giving me the address?"

Posted by Fred Theilig at 9:37 PM No comments:

This documentary takes an insider's look at the sport of bodybuilding, specifically at Arnold Schwarzenegger's attempt at a sixth Mr. Olympia title in 1975. We also see the Mr. Universe championship.

I had a similar experience watching this as when watching Project Runway with my wife. The behind the scenes look shows less the final product, but the process and motivation of the participants. This can be enlightening. While I have been known to lift a weight and to even wear clothes, both worlds were a mystery, and somewhat foolish looking to me. Pumping Iron was an eye opener.

Here's what I found interesting: Arnold Schwarzenegger was already famous at the time of this documentary. Not Conan/Terminator/Kindergarten Cop famous, but he was renowned in the bodybuilding world and even did a fair amount of Hollywood (Streets of San Francisco, people!) I thought he was an unknown. Also highlighted was TV's Lou Ferrigno. For reasons I can't explain, I thought Lou was a short man made to look large by careful camera angles. Nope. The dude was in the 6'4" range, towering over Arnold.

Through the competition, Schwarzenegger is supremely confident, having won the previous five competitions, and was thought unstoppable. Lots of bravado abounds amongst the competitors, but Ferrigno comes off as humble, focused, and family oriented. His father is his coach. Arnold speaks of missing his father's funeral because he didn't want to interrupt his training. He later admitted this was a lie.

Spoiler alert: Arnold did win his sixth title before retiring. He came out of retirement in 1980 to win again, just to prove he could. His seven titles is no longer a record. Two people have eight each.

Pumping Iron is fascinating and very well done. This documentary is required viewing for weightlifters and bodybuilders, but might be more useful to the rest of us. AMRU 3.5.

Posted by Fred Theilig at 12:21 PM No comments:

Hot rod cops do battle with a renegade gang. Wow, am I surprised how bad this movie is.

Back in the day I knew people who were obsessed with Mad Max. I was the lame outsider because I never saw it. Thirty years later I still had not seen it. So, in an attempt to acquaint my sons with the movies of my youth (Die Hard, RoboCop, Total Recall ...) I had them watch Mad Max. We were all in agreement. Dull city.

I like low budget films, and am willing to forgive the grindhouse/exploitation genre for what it is, but there is a large stretch in the middle that could be removed without harming the story, such as it is. Cool explosions at the beginning, better than fair climax, and about a half hour of almost nothing in between. Had they clipped the 90ish minutes down to around 60 this would have been a lot more watchable. Had they the budget to do explosion scenes they planned, all the better.

So, I guess I'm glad I saw it because it's kinda an essential in some circles. This is the movie that made Mel Gibson a star (and back in the day, youngsters, he was a big star). I cannot, however, give it a passing grade with a clear conscience. And I do know that it's the sequel that was great. But the 1979 effort: AMRU 2.5.

RIP Anita Ekberg. I once started watching La Dolce Vita on a work night and had to stop for sleep. The next morning, Netflix removed it from streaming. I always wanted to see it through. Boccaccio '70 is available, and I guess I will settle for that.
Posted by Fred Theilig at 8:37 PM No comments:

It's hard not to notice that my movie count was way off this year. I won't go into detail, but in February that my mother was diagnosed with Lymphoma. Weeks later my father was diagnosed with lung cancer. As my father's days were coming to an end my mother was hospitalized and looked as if she would beat him into the grave. My father passed in late August surrounded by family. My mother, surprisingly, recovered. It has been a transformative experience for me and it's no guess why my time and concern was directed elsewhere.

I expect my 2015 numbers to look more like 2013, but you never know what life will throw at you. But let me start with examining how well I did on my preset goals. Apart from the movie count I mentioned lightening up on the Sci Fi and Horror. Of the 28 films, eleven were tagged as either Horror or Sci Fi, so I guess that was an improvement. I did do well on the "classics", even hitting two best pictures. One surprise is hitting six silent movies, liking most of them. Maybe I've finally figured them out. Zero musicals. I'm good with that.

Unwritten, I had intended on progressing on the James Bond films, hitting another William Castle or Marx Brothers film, and maybe even a Russ Meyer. Struck out there. But I did finish off the Val Lewton horror collection and introduce myself to new directors to follow. Overall, few of 2014's movies were garbage and many were quite good.

Only one film, Batman (1966) was a resounding failure. I expected it to be bad, but it surpassed expectations. Twelve I rated 4 or better. Compare that to seven for 2013 when I watched sixteen more films. So, I guess I liked what I selected. I hope to continue that trend. I rated The Graduate the highest, but I think the real winner was Keaton's The General. It's probably the one I'm most likely to watch again anytime soon.

Now, for the complete list of movies I saw in theaters: Hunger Games MJ1. Yea, that's it, and it was on my wife's insistence. She made we watch the first two films streaming in the week before we went. Not a bad series (3.5 range, I would guess), but someday I'd like to go to the movies to see a movie *I* chose. Someday that may happen.

For 2015 I will throw in the following goals: Bond, Castle, Marx Bros., more Best Pictures. Also Hitchcock, Bergman, and Kubrick. One last item: I will formally expand into the 1970's. I have no where near saturated the older territory, it's just that there are a lot of excellent films that I have neglected in my life. I'll resist the urge to rewatch movies I know I love (sorry, Star Wars).

Thanks for following.
Posted by Fred Theilig at 12:19 AM No comments: