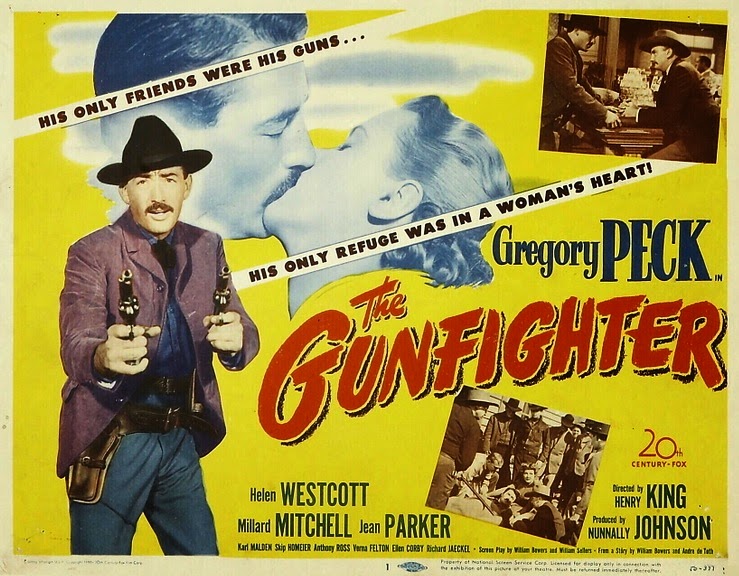 Tired gunfighter (Gregory Peck) just wants to retire but every young upstart looking to make a name for himself won't leave him alone.

After taking out yet another kid, he heads out of town with the kid's brothers on his tail. Now in Cayenne, he meets up with his old buddy, now Marshal, and tries to look up his old flame who isn't too keen for the gunfighter lifestyle. While in town his celebrity status becomes the event of the day.

300+ movies and Gregory Peck #1. How did that happen? There are other Hollywood legends not yet covered, but this one is surprising. I have a list of names to cross off and hope to chop it down to size in the coming year.

Ok, back to the story. Sound familiar? Yea, it pops up now and again. Blazing Saddles, a Twilight Zone episode (I'm certain, but can't find it). It's something of a western stereotype, but this, I believe, is it's first incarnation.

More psychological in nature, it's a new direction for Westerns. Not really a romance nor action/adventure, although those elements are not absent, The Gunfighter is a pleasant, well made, somewhat predictable diversion. I recorded it on a complete lark off of TCM. It wasn't a box office success. Filmmakers, jokingly, blamed Peck's historically accurate but silly looking mustache. I thought it looked fine. AMRU 3.5.

Posted by Fred Theilig at 11:53 AM No comments: 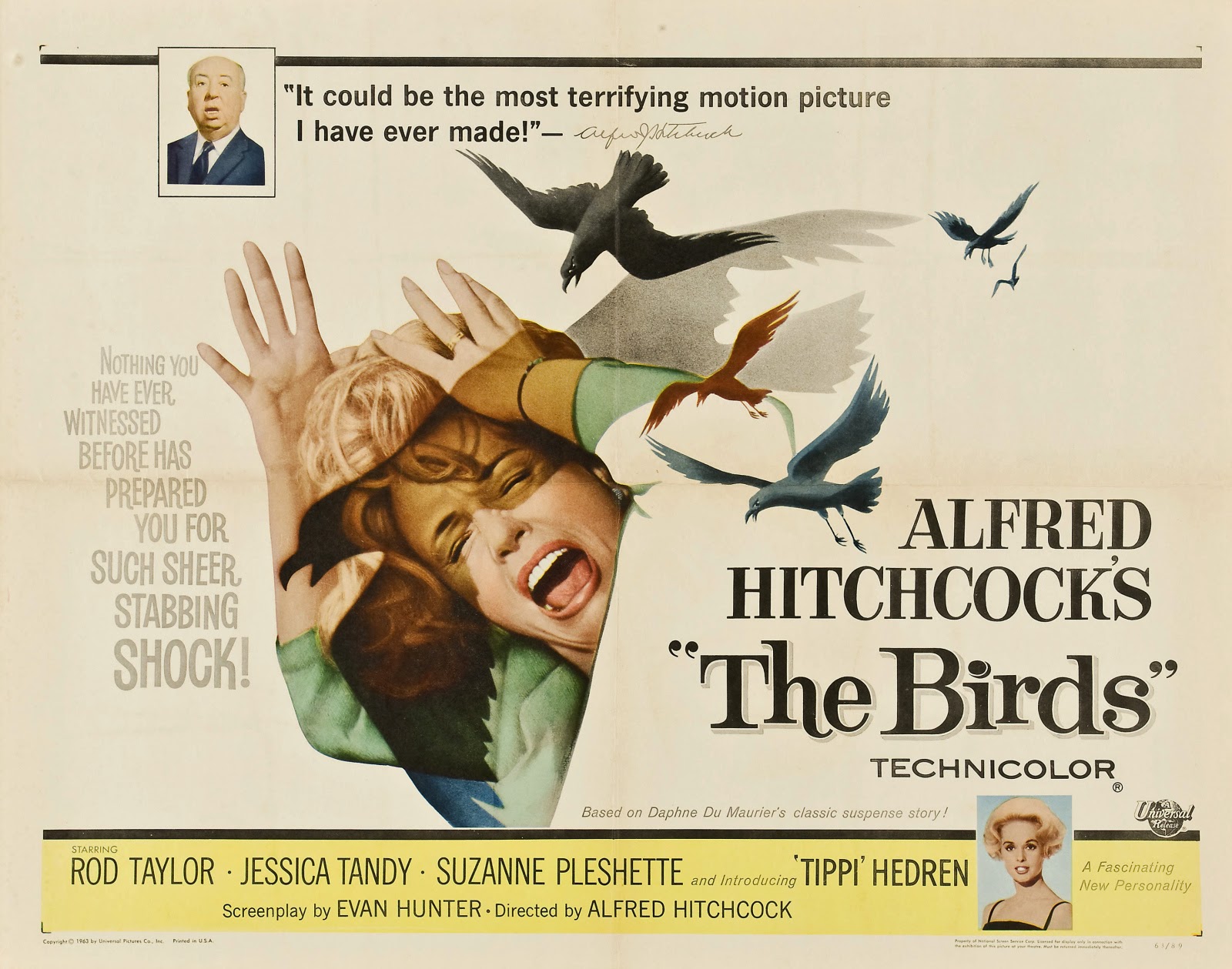 Attractive (spoiled) socialite (Tippi Hedren) travels to a small coastal California village to play a prank on a man (Rod Taylor) who earlier played a prank on her. As love blooms, all of the birds go crazy.

This could have been just an unconventional monster flick with a bolted-on love story, but not in Hitchcock's hands. We learn and really care about the flawed characters as the situation becomes more dire.

Before I praise The Birds some more, allow me to pick some nits. When birds attack, children and adults alike run around like nuts rather than run for cover. Three scenes in particular come to mind, but I shan't spoil anything. The characters simply don't behave believably. Hedren herself asked why she would do something and Hitchcock responded "Because I told you to."

Additionally, I detect no larger meaning to the horror. Just birds gone crazy. No cold war tension, environmental disaster, no science gone too far cautionary moral. Maybe that isn't a flaw in of itself, but what we have is a budding romance and crazy birds. That's all. It seems incomplete.

Now, that said, The Birds is a wonderful tale. Great pacing, character development, and well written dialog. A very young Suzanne Pleshette was quite adorable (although it was hard watching her light up cigarettes knowing she will die young of lung cancer). Jessica Tandy played the overprotective mother, lending to the idea that she was always old. AMRU 4.

Side note: since I saw Psycho I have been targeting this movie. I would record it and it would be deleted from my tiny DVR before I got a chance to see it. I recorded it again, and again it was deleted. On my third try I had a DVR failure and it didn't record. Luckily, this is a movie that TCM loves to run. On the forth try, I finally got to see it.
Posted by Fred Theilig at 11:16 PM No comments:

An elderly doctor (Victor Sjostrom) travels to the town where his son lives to receive an honorarium. Along the way he passes places from his youth, and reevaluates his life now that it's near the end.

I was hesitant at first to watch this because, well, Ingmar Bergman. His reputation for confoundingly symbolic movies is legendary, but I found this very accessible. Old Doctor Borg's journey is both physical and spiritual as he explores his life and loneliness. His relationship with his son, mother, and daughter-in-law, his dead wife, his live in housekeeper, with society at large, as with life itself.

He has dreams that trouble him, as they did 1950's literalistic American audiences, no doubt. He sees and interacts with images of his past and maybe seeing the error of his ways. In this manner it feels like a version of A Christmas Carol, similar to The Phantom Carriage (directed by and staring a young Sjostrom). The people he crosses paths with provide a real world illustration of his past mistakes.

One cannot go into all of the meanings and metaphors of a Bergman film here (certainly not with a Philistine at the helm), but suffice it to say Wild Strawberries leaves you thinking. While also being very watchable. AMRU 4.

Posted by Fred Theilig at 12:59 AM No comments: 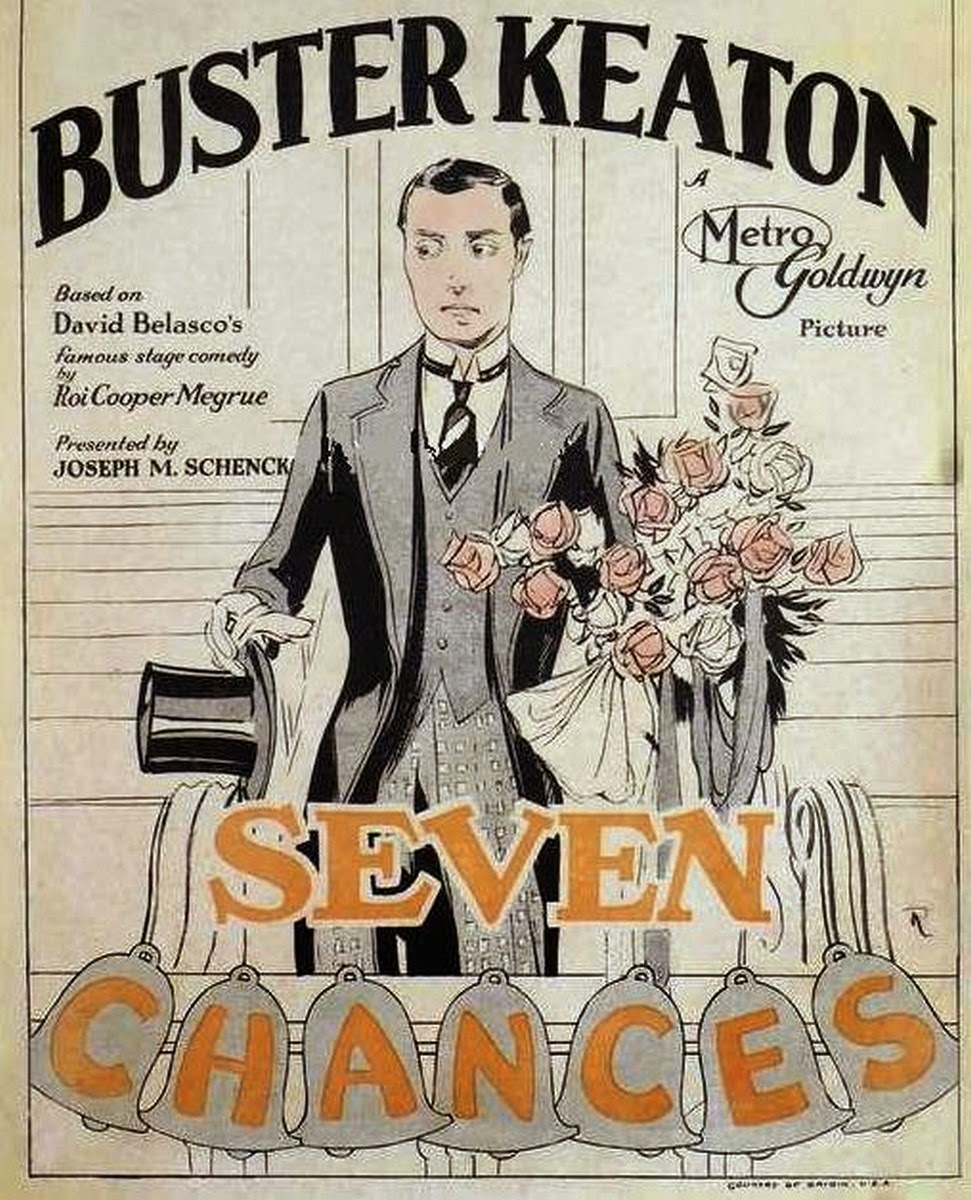 Man (Buster Keaton) in financial trouble stands to inherit seven million dollars if he is married by 7:00 PM. Comic mayhem to follow.

Sound familiar? It should. The theme had been done many times before and since. Not a film Keaton was eager to do, he never-the-less injects his comic genius. The chase scene alone is worth the price of admission. Not the masterpiece that The General is, but still very amusing. AMRU 3.5.

After presenting this movie, TCM ran the documentary "So Funny It Hurt: Buster Keaton & MGM". It was a compassionate documentary (read: biased) that retold how Keaton gave up artistic freedom for financial stability by signing with MGM. It also lovingly told of the personal tragedies that befell him, like infidelity, alcoholism, and poor financial handling. I am more likely to blame his fall from grace on the conversion to sound, him becoming a second banana in poor combinations, and his personal demons. But we can blame MGM if we want. TCM presets some excellent biographies. This wasn't one, but wasn't exactly a waste of time either. I'll keep an eye out for a better one.
Posted by Fred Theilig at 2:51 PM No comments: