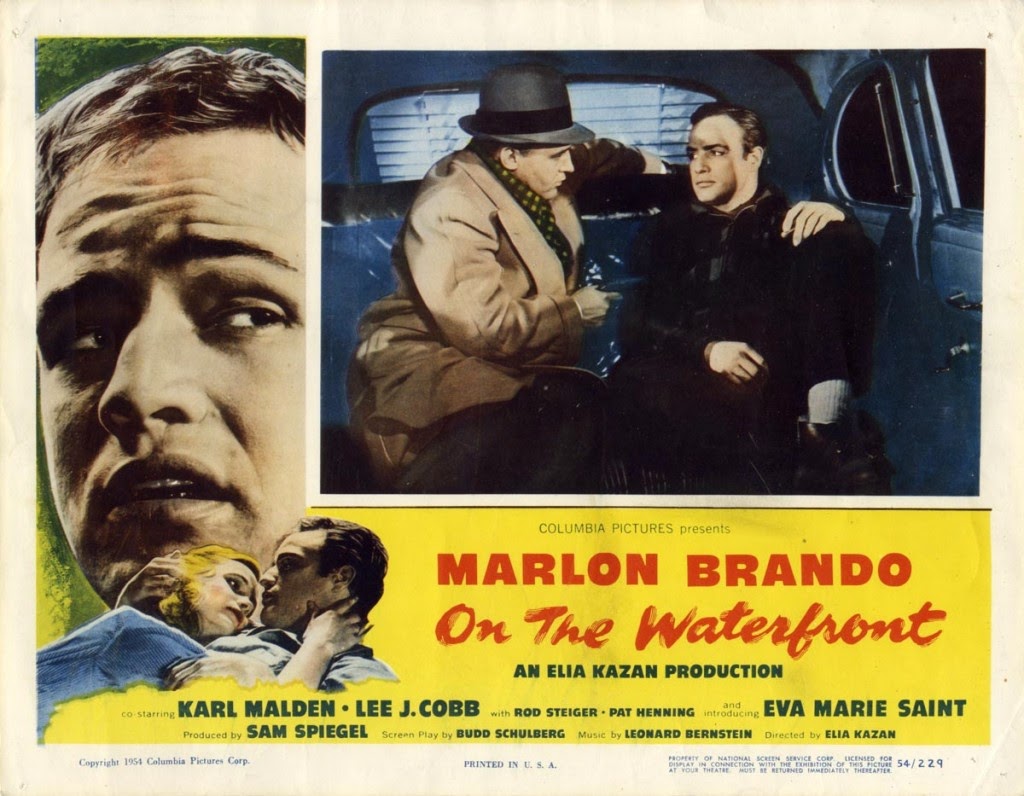 The docks are controlled by the union, which is to say, the mob. The few make all the money while doing no work and the many work like dogs and barely scrape out a living. How is this careful balance managed? By throwing the complainers off of buildings.

Terry Malloy (Brando) coulda had class. He coulda been a contender. He coulda been somebody, instead of a bum, which is what he is. The union thugs use him to draw above-referenced rat to the rooftop so that he can be tossed off of it. Malloy thought they were just going to lean on him. Furthering his ambivalence to the status quo, he starts to fall for the rat's hot little sister. Also, there's this rabble-rousing priest.

Man have I a lot to say about this picture.

First, the primary conflict is the pigeons verses the hawks. Malloy is a pigeon who might be able to become a hawk if he plays along. The hawks are exploiting the pigeons and the moral thing is to testify against them. To be a rat. Allow me to introduce Elia Kazan to the audience.

Elia Kazan was a talented director of both stage and screen. His work speaks for itself. And when the House Un-American Activities Committee was looking for rats for their commie witch hunt, Elia raised his hand and said "Me first!" When he was presented with an honorary Oscar many years later, some in the audience conspicuously remained silent.

So, when we compare this film to High Noon, where bad men enter the town and scared men refuse to stand up to them, we see the obverse side of the same coin. Does a hero stand up to outsiders who present a danger or speak out on the danger that is there already? The devil is in the details and may people have their opinions the seriousness of the perceived threats.

That out of the way, let's discuss Brando and his performance. One of the greatest performances or terribly overrated? Depends on if you're a commie or not, I presume. For me, it was an eye-opener. When you see clips of the film he appears awkward and unconvincing. He's acting like Brando. But taken as a whole, it was quite impressive. Conflicted is the key word here. Every day Brando left the set early to see his therapist leaving the rest of the actors to work without the star. Rod Steiger never forgave him.

Oh, here's a pet peeve of mine. Girl locks herself in her apartment and yells to the hero to go away. He breaks down the door and she fights him off. He forces her to kiss her and true love blooms. "But your honor, that worked out great in On the Waterfront!" Yea, let's leave that crap in the last century.

Great script, great acting, wonderfully shot, solid story. The ending, however, suffered from a surplus of sap. The few flaws (Malloy's spidey senses totally fail him late in the movie) were overlooked or invisible to the Academy. It won eight Oscars. AMRU 4. Kazan was an exceptional director. And a rat.


"Conscience... that stuff can drive you nuts!"

Posted by Fred Theilig at 10:59 PM No comments: