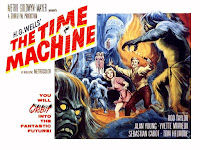 Victorian inventor George (Rod Taylor) discovers a way to move forward and back in the fourth dimension - time. His friends scoff at the notion, and weary of man using his ingenuity to kill more people, he chooses to move forward into a more enlightened time. He learns from a mannequin across the street the horrors of The Great War, then of WWII, then WWIII in 1966.

Because nuclear war has caused vulcanism, the time machine is trapped underground and our hero must wait until the new mountain is worn away before he can stop. When he does, it's the year 800 thousand something and he finds an idyllic setting where everyone is blond and nobody has a care in the world. In fact, when one is drowning in the river, nobody in the world cares. Except George.

After rescuing her, because she's hot, he soon learns that the pretty, empty headed surface dwellers live in fear of the ugly troll-like people who live deep in underground datacenters. Or whatever. Time for a revolution!

Can't go wrong with George Pal. Visually appealing, family friendly, but with a touch of social commentary. The practical effects may appear slightly cheesy today, but they were state of the art, and quite visionary. It won the Oscar for effects and was nominated for a Hugo. The Twilight Zone won.

There is a panel on the time sled that reads invented by H. George Wells, meaning that the protagonist IS the author of the source material. That's a cool detail. Young hot Yvette Mimieux was underage when filming began and turned 18 during the shoot.

One can quibble about time travel paradoxes and issues with the story, but this is a story about man using his ingenuity for destruction and it's ultimate fate when he turns it's back on learning, so keep your nits! The movie is fairly thin and moralistic, but it is wonderfully crafted, visually interesting, and edited to perfection. Rod Taylor's performance was perfect for the story. AMRU 3.5.


"Which three books would you have taken?"

Posted by Fred Theilig at 5:40 PM No comments: 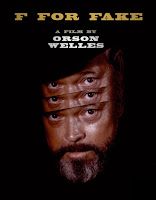 F for Fake is Orson Welles' video essay about Elmyr de Hory, a notorious art forger, who successfully passed off his copies as authentic. Along the way, it is discovered that de Hory's chief accuser, writer Clifford Irving, is himself a fraud, having faked documents to pass off a fraudulent biography of recluse Howard Hughes. This fake within a fake spins off more tales, like Welles' own War of the Worlds trick.

Welles' so-called free-form documentary is irritatingly herky-jerky. The fat man looks foolish in the black cape and hat, and appears too much to enjoy filming his girlfriend 26 years his junior and acting all mysterious. The overall theme appears to be that people are not what they seem, art is not what it seems, and Orson Welles is not what he seems.

Even still, there is something compelling about the Wellesian style. Here is the Orson I remember from my youth. Self-important, fat, drunk, and rambling, but somehow charming. It's hard to describe. He tells his story, many stories in fact, in a very non-linear fashion. In the end you learn something about the art world and the people that make it up, and your are entertained. While I have misgivings about the overall viewing experience, it is quite different, and maybe that's what trips me up somewhat.

Now I will point you to an episode of one of my favorite YouTube channels, certainly my favorite on the topic of cinema:

New surgeons at a Korean war MASH unit three miles from the front subvert authority, cause chaos, and manipulate the commanding officer, while performing in extremely hostile conditions. Then they play football.

MASH is a gritty, morally ambiguous, and episodic film that captured the attention of the anti-war counterculture of 1970. Faithful to the source material, it depicted war entirely different from the heroic fantasy. When the studio complained that the soldiers were dirty, director Robert Altman, a veteran of WWII, said soldiers in war were dirty. Execs then told the filmmakers of Patton, also in production at that time, to dirty up their soldiers.

As a kid we watched M*A*S*H regularly. One new year's eve my sister and I stayed up late while my parents were out (people did that back then!) and we watched the movie on network TV (they bleeped out "god" in "god damn"). I could not reconcile this film with the show, and it takes a careful adult eye to see the transition. Each character was groomed for 70's TV audiences, and the protagonists became for family friendly (Hawkeye became unmarried). Tom Skerritt as the slightly racist southerner was cut altogether. Kept was the idea that enemy wounded also deserved care, as well as a general mistreatment of women.

There is definitely an Altman style and few films represent it better than this. The dialog is layered as in real life, and the story is non-linear (both "fixed" for TV). I can't say that I am in love with his style, but I do have respect. And it was fun to see this old friend again with my son. He has been humming the theme ever since. AMRU 4.


"I'd dearly love to see that angry!"

Posted by Fred Theilig at 10:32 PM No comments:

Young Lorna Hart (Barbara Stanwyck) wants ever so much to be a nurse, but without the proper degree (high school) she isn't qualified. But bumping into a chief surgeon on the way out appears to have solved all that. She is paired by sassy blond Maloney (sassy blond Joan Blondell) who shows her the ropes. At the midpoint of the film, Lorna gets a private gig and the drama begins. She is taking care of two young girls who are ever so sorry they have been such a bother and promise to be good, really they do! They are slowly dying of starvation and the twitchy attending physician and the cruel chauffeur Nick (Clark Gable) seem to like it that way.

Classified pre-code mostly because Stanwyck and Blondell have occasion to undress to reveal their overly complicated undergarments. In one scene they share a bunk for no clear reason, then suddenly shiver inexplicably as if cold. While a bootlegger is a protagonist, this is during the great social experiment, and drunkenness must shown in a definitely negative light. One character exclaims that she's a dipsomaniac and she likes it. Dipsomaniac is an old fashioned word for alcoholic but I suspect filmmakers wanted us to think she was saying nymphomaniac, which also fits.

James Cagney was suddenly a big star so he turned down the role of Nick, allowing nobody Gable to take it. I like the jargon thrown in there in an attempt to make it sound credible, like "Have you tried the Murphy drip?" There are nice elements like the point of view shot from an ambulance at the beginning, and it holds your interest, but otherwise Night Nurse is standard fare for it's time. AMRU 3.

Posted by Fred Theilig at 9:03 PM No comments: