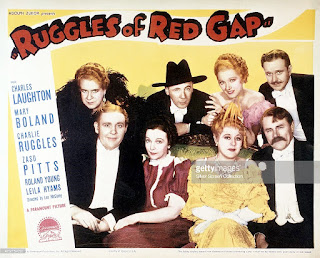 The services of a proper English man-servant Ruggles (Charles Laughton) are won in a poker game by a course American couple, and he is headed to Red Gap, Washington. Hilarity ensues.

Husband Egbert (Charles Ruggles - no relation) is a fish out of water in 1909 Paris what with his checkered suits and outlandish olde-timey mustache. His social climbing wife Effie is trying to bring civility to him and her frontier hometown. Once back on the range it’s Ruggles (not Charles) that’s the fish out of water, what with his understanding of his status in society. Problem is, Egbert introduces him around using the honorary title Colonel and people take it literally. Ruggles becomes a society hit, and a problem for Effie and her equally ambitious brother-in-law.

Ruggles of Red Gap hits on a couple themes, primarily the equality of men in America compared to polite, aristocratic English society (in Paris). Filmed in slapstick style by Duck Soup director Leo McCarey, the understated Laughton and super-understated Roland Young stand in comedic contrast to all the hootin’ and a-hollerin’. It also, however, does not shy from more poignant moments like when Laughton recites the Gettysburg Address, something he’d do frequently in life.

ZaSu Pitts has a small but important role as an American servant that catches the Colonel’s eye, but the filmmakers stop short of giving her enough screen time to do something truly memorable. Similarly with old friend Leila Hyams, who's job here is to be pretty and desirable. Remember from Island of Lost Souls and Freaks.

Not laugh out loud funny but amusing with some clever bits, Ruggles of Red Gap is a fairly charming light comedy. We overlook the deep south stylings of our Red Gap friends from the Pacific Northwest. All we care is that they are uncouth ‘mericans for us to identify with. So, mission accomplished there. AMRU 3.5.
Posted by Fred Theilig at 12:18 PM No comments: