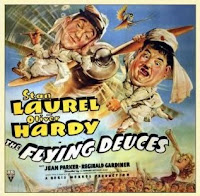 On vacation in France, Oliver Hardy falls in love with a young hottie (Jean Parker). When she rejects his offer of marriage, he decides to end it all. Stan Laurel helps him out.
After failing miserably at what should be a fairly easy task, they take the advice of a passing stranger to instead join the French Foreign Legion. After a spell in the legion, Oliver declares himself cured and wants out. Unfortunately, getting out of the foreign legion is harder than getting in. Ming himself, Charles Middleton, plays the commandant.
The Flying Deuces is a partial remake of Beau Hunks (1931), a short that also has our heroes joining the foreign legion to help Ollie forget a girl who jilted him. Ming again played the commandant. In Deuces, if the title and poster are to be believed, involves some flying. I checked the clock at the point they first boarded a plane in this 60 minute movie. It was at the 56 minute mark.
The first Laurel and Hardy film I first covered was Utopia, their last effort. My take was it's a poor example of these comedy legends and wanted to see something closer to their prime. Here's to hoping this isn't it. I called Utopia "tired, unoriginal, and unfunny". Here, twelve years younger, I found it much the same. Ollie appeared more alive, but not much funnier. My oldest son watched Utopia with me. Two years older, he kinda giggled at one point. Once more than me. Maybe I need to go earlier to see them at their best, or maybe their comedy just doesn't hold up. I may be willing to find out. AMRU 2.5.
Posted by Fred Theilig at 7:34 PM No comments:

The eldest son of the affluent Talbot family dies in a horrible hunting accident, so ne'er-do-well younger son (Creighton Chaney) returns home to patch things up with 'oll dad (Claude Rains) and take his place as favorite boy. Dad shows junior around the laboratory. Seems Larry knows a thing or two about telescopes as he took a janitorial job in a California observatory. Straight away he points said telescope townward to spy the young hotties.
His eye lands on young Gwen (Evelyn Ankers). He pays her a visit and creepily explains how he has been stalking her. She is a proper lady and engaged to a proper gentleman, but for some reason cannot resist his lumpy goodness. He coerces her into visiting those lovely gypsies that are welcomed everywhere they go. To keep her virtue intact, Gwen brings along her undoable friend, Jenny (Fay Helm).
They visit the Gypsy fortunate teller Bela (Bela). Jenny gets her fortune read first. Seems her future has her being chowed on by an Evil man-wolf. Lumpy Larry arrives in the nick of time to kill the offending wolf, but after her throat has been ripped out. For his troubles, he gets a nasty bite to his chest. When the authorities arrive, they find Bela's body and Larry's walking stick. Hmmmm ...
Would I be spoiling things to say that Chaney becomes The Wolf Man?
Rains playing Chaney's father was rather interesting, because in real life Creighton's father was also a little man who could act circles around him. Bela was also good in his limited role, and Ralph Bellamy was good in his supporting role, but who I really noticed was Jessie Arnold as the Gypsy woman. Creepy and nuanced, the right kind of character actor. Chaney, as always, is ham-fisted in every scene.
Now, I've pointed out that the modern incarnation of zombies (post-Romero) are actually ghouls, not zombies as they exist in "real life". So too will I criticize the werewolf. IMdb asserts that many myths of werewolves come from The Wolf Man, but a few came from Werewolf of London, most notably that being a werewolf is a curse brought on by a bite. In folklore, however, one is granted the power of a werewolf by signing a pact with the Devil.
That aside, this icon of horror that made Chaney "Jr." a star, owes very little to him. The good story and script, good acting (mostly), and quality sets and production survived a mediocre actor in the lead. Imagine if Karloff got the role. AMRU 3.5.

"Even a man who is pure in heart and says his prayers by night, may become a wolf when the wolfbane blooms and the autumn moon is bright."

Posted by Fred Theilig at 3:38 PM No comments: 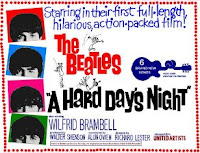 The Beatles have a performance on a TV show. They have to travel, deal with fans, overcome personal issues, and keep Paul's grandfather in line (He's very clean). Along the way, John acts foolish, Ringo becomes moody, songs are sung, and a good time is had by all. That's enough talk about the story.
I knew the Beatles. That is to say, I knew their names, their personalities, and I could recognize any one of them by their voice. I'm not alone. Just about everyone anywhere near my age (and older) feels the same way. We are intimately familiar with each of the band members. This can't be said of any other band. And it's clear that this familiarity is in no small part a result of A Hard Day's Night.
So the question is, will this icon of pop culture (the movie, not the band) resonate with my fifteen year old? He loves music. He likes the Beatles. Before I get to that, here are a few items that struck me. What impeccable timing! The Beatles landed in America in February of '64 and the movie was released that summer. If the movie was a flop, or wasn't released for a year or two, how that would have affected their legacy? They still were great musicians, but there is something about striking while the iron is hot to cement your reputation. And I think this movie did just that.
My son asked an interesting question: How did they happen to film all of this? He thought it was a real documentary, as I did when I first saw it years ago. That is a testament to the quality of the production. Excellent production, great subject matter, perfect timing. It perfectly captures the craziness of Beatle popularity and showcases the band members wonderfully. 52 year old Wilfrid Brambell was great as Paul's grandfather (well, everyone's entitled to two, aren't they?) It both created the Beatle legend and mocked fad popularity at the same time. The stars aligned.
But Beatlemania has faded and 1964 is ancient history in a Hannah Montana/Justin Beiber world. How does it hold up? Rather well, actually. My son and I both enjoyed it. AMRU 4.

"How did you find America?"
"Turn left at Greenland."

Posted by Fred Theilig at 4:33 PM No comments:

Pretty Helene (Patricia Owens) kills her loving husband, but why? Francois (Vincent Price), the deceased's brother, wants to know. What follows is less sci-fi horror and more Victorian mystery. Finally, Helene is tricked into telling the story that we all know, whether or not we saw this or the many, many sequels and remakes.
But if not, I'm going to ruin it for you right here: Scientist Andre (David Hedison) is working on a machine to teleport matter. Refusing to experiment on animals, even insects, he jumps in himself. Unbenounced to him, a humble fly accompanies him in the chamber and their molecules are mixed up. Andre sports an inconveniently large head and creepy arm and somewhere out there is a little fly with a little human head. How cute.
Wifey goes crazy trying to find the fly in hopes of sending them both back through and straightening this matter out. But, sadly, time runs out and Dashing doctor bug-head is slowly being taken over by his insectoidal instincts. His last wish is to be killed and his body destroyed so nobody ever learns what happened. Good wifey crushes the good doctor in an industrial press. What a way to go.
The movie contains a total of two scenes that profess true horror lineage. The moment Helene sees her husbands true condition, and the subsequent shot of her in multi-part compound image format, and the climax scene in the spider web (Help meeeeeeee! Help meeeeeeeee!). Just about everything else is, as I said earlier, Victorian mystery. That said, if you didn't know the story (and, now you apparently do), the impact would have been significant. As for a modern viewer's reaction, it is well worth watching. Well made, well acted, and a true cultural icon. AMRU 3.5.
Posted by Fred Theilig at 5:47 PM No comments: 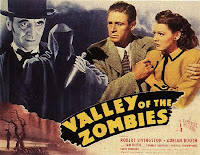 Blood is discovered missing and soon good doctor Maynard is visited by a strange man sporting a strange back story. It seems the good doctor once committed the creepy Murks to an insane asylum and he never forgave him for it. Murks faked his death using a technique he learned in the Valley of the Zombies, where he appears dead, but isn't. One side effect is that he needs blood. Lots of it, and preferably his type. Guess what? Doc Maynard is his type.

Well, with Maynard dead and strange things afoot, hunky doctor Terry (Robert Livingston, I presume) and the hot nurse Drake (Adrian Booth aka Lorna Gray) are on the case. Klutzy amateur sleuths bumble about while being impeded by incompetent police. This stuff just writes itself.
With a run time of just under an hour and no big names to speak of, don't confuse this Republic picture with anything other than a B cheapie. That said, they did a fair job with it. Decent score, convincing sets, decent pace. Not too creepy but maybe that was because I watched it during daylight hours. I get the impression it could have been a fairly good one had they spent just a little more effort on it. It just seemed to lack something. Zombies, for instance.

Crazy Murks faked his death and in the Haiti Voo Doo tradition, that qualifies. But, Voo Doo zombies are slaves of the Voo Doo priest. Nurse Drake does get hyptnotized, but no. There are no zombies here. Or valleys for that matter. It has the elements of Crazy and Supernatural so it fully fits the Horror genre, but no zombies here.
So, with little to say about the picture, let's poke some fun at the actors. Lorna Gray was born Virginia Pound, married a man with the last name Brian, and changed her name to Adrian Booth. Identity crisis? She worked with the Stooges and Buster Keaton, had small roles in medium pictures, larger roles in bad ones, and never worked after 1951. She lives still, pushing a hundred.

Bobby Livingston did a lot of nothings throughout the 30's, 40's, and 50's, and his last three movies were Girls for Rent, The Naughty Stewardesses, and Blazing Stewardesses. I haven't seen them so I can't say if he went out with a bang or a wimper. If IMDb ratings mean anything, these cheesecakes are better left unseen. As for Valley of the Zombies, AMRU 2.5.
Posted by Fred Theilig at 7:02 PM No comments: