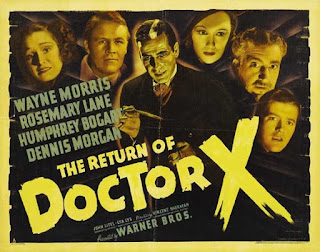 A reporter scores an interview with beautiful star of the stage Angela, but when he arrives he finds her dead. Stabbed in the heart and everything. Rather than call the police, he runs a sensationalist news story. When she shows up at the newspaper very much alive and threatening to sue, our hero finds himself out of a job. He starts pestering his hunky doctor friend to find out if someone could survive such a wound. Lucky for our heroes, hunky doctor is asked to identify the body of a man who died in exactly the same way. The trail leads to artificial blood and the hunky Doctor’s boss’ creepy assistant (Humphrey Bogart).

Wait, what? Yes, you heard that right. Humphrey Bogart plays the creepy Doctor X. The studio naturally wanted Boris Karloff for the role but couldn’t get him. So instead they enlisted WB bit actor Bogart, who was none too pleased. Still, he did a better than fair job in his only horror role. Ostensibly a sequel to the 1932 film it shares no similarity save for a character called Doctor X. Different backstory, different first name, and, of course, different actor.

Not much horror in this one unless you count the way our hunky doctor practically orders a pretty nurse to go on a date with him, then leaves her in the car while he runs around trying to solve his little mystery. I guess you do what you must to keep your job.

The Return of Doctor X has a fair amount of atmosphere with a little sci-fi thrown in, and Bogie was rather creepy in the role, even if he felt his unfamous self too good to do genre movies. Was being a gangster thug so much better? Nice and short, you may find it worth your time. I did. AMRU 3.

Posted by Fred Theilig at 1:15 AM No comments: 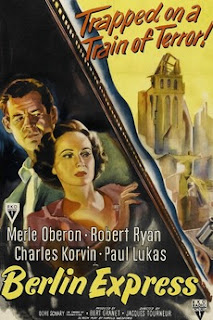 An American, a Russian, a German, and an Englishman walk into a bar. I mean a train. Going to Berlin. Post-war Germany is divided by the three main allied powers. Or four, I don’t know. Anyhow a German professor is working to reunite Germany for peace, so he gets blown up. Because the allied authorities are just rounding people up for questioning and nothing else, our band of multi-ethnic heroes investigate. Turns out there are these Germans who aren’t too keen on this whole ‘peace’ idea.

Enigmatic Merle Oberon played the German professor’s faithful helper. She mostly appeared in period costume dramas which is why I haven’t visited her before. Jacques Tourneur is one of those directors who could have been a big name given different circumstances. This is the sixth of his film that I’ve seen and the least interesting.

Berlin Express bares a certain resemblance to The Third Man. Actually filmed in Germany (the first US film to do so after the war) we see the war’s aftermath and the consequences the people must face. But Berlin Express isn’t quite the film. Story, acting, script, and cinematography, it pales in comparison. I don’t mean to imply that it is a bad film. The Third Man is a masterpiece, and this was, well, made by RKO. Berlin Express is quite watchable if you step clear of the comparison. It holds your interest if not your memory.

Posted by Fred Theilig at 7:37 PM No comments: