Townsfolk blame a doctor (William Prince) for the death of his wife. They say he was drunk. The dead wife's sister (daughters of the town's richest man) has also died young and the calls for 'oll Doc Barrett to head on out reach fever-pitch. Doc's daughter turns up missing then his secretary receives a strange call saying that she is with the dead and has five hours before she suffocates. The frantic search begins.

Everyone is a suspect. Is the motive revenge? Inheritance? Or ... no, it's one of them two, almost certain. Anyhow, details emerge and new questions are raised. The suspects include the doctor's secretary, his new fiancee, the cop (played all butch by Thurston Howell himself), the undertaker, the baker, the candlestick maker ... the list goes on.

This is William Castle's first gimmick-horror. A $1000 life insurance policy was given to every participant in case they died of a fright (and that does play into the story). I'm sure Lloyd's of London had no problems issuing such a policy as Macabre is almost entirely unscary. The story plays out as a who-done-it (or, more accurately, a who-doin'-it) and falls closer to mystery/thriller than horror, but let's not split hairs.

TMC ran a bio of he man then featured this gem. He finally got to make the kind of movie he wanted to and had to mortgage his house to do so. It was a huge hit. He would go on to make a host of cheesy money-makers that I will eventually see.

So, how does the mystery/thriller work? Well, it does keep you guessing, but in the end it'll leave true mystery fans unsatisfied. For me, I found it well worth the investment in time. AMRU 3.
Posted by Fred Theilig at 8:43 PM No comments:

Earth loses contact with a rocket to Mars and is presumed lost. When it reappears, they find two survivors: the hysterical requisite hottie (Naura Hayden) and Colonel O'Bannion (Gerald Mohr) who is infected by a strange, bad makeup and an even worse Bogart impersonation. They grill the hottie to find out how to cure him.

Flashback time. Our intrepid crew lands on the red planet and sees that everything is eerily still. As if the plants were being controlled. Controlled to be ... still. Whatever, they venture out and are attacked by a carnivorous plant, then by a giant mouse-spider-bat-crab monster, finally by an ameboa. A big one. With a rotating eye. They try to return to Earth but they are held in place, as if there were a controlling force. Forcing them to ... well, whatever.

Finally they are allowed to return to Earth and the Hottie remembers enough so save the suave Colonel while they play the Martian's "don't ever come here" warning message. And they all lived happily ever after. Except the people who died.

High on the list of cheesy special effects is CineMagic! Here, black and white video is saturated with red to make it look ... well, bad. Then they have the actors interact with hand drawn props that look only slightly worse than the live action. Marvelous! There's nothing like being kicked in the groin to make you forget your splitting headache.

Oh, exagerating, am I? Judge for yourself: 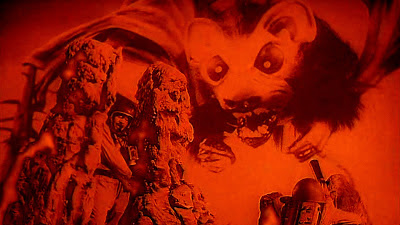 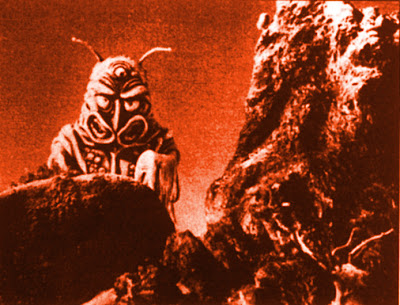 Bad acting, cheeseball script, horrible special effects, and the stereotype of 50's B cinema. The plot holes were big enough to drive a giant mouse-spider-bat-crab monster through. While on the surface wearing space suits, one character gives his gun (Cleo) a kiss, demonstrating that the helmets don't have glass. And it only starts there.Despite the unbelievably bad effects and cotton candy plot, I kinda liked it. No, it won't make the year's best of list, but even though I fell asleep during it (had to re-watch the last 25 minutes on Amazon Prime after Neflix axed it), I have to say I'm glad I watched it. AMRU 3.
Posted by Fred Theilig at 9:35 PM No comments: 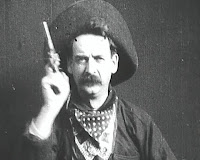 Here, at 11 minutes, is Hollywood's first western. And filmed in 1903, it depicts almost contemporary events. Other than that, not much to say about this one, other than the jaw-dropping scene at the end where a desperado fires his gun straight at the audience. That was Peter Jackson-type stuff back in the day. Other than that, short, linear, and public domain. AMRU 3.

Posted by Fred Theilig at 6:28 PM No comments: