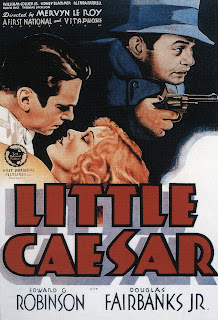 The rise and fall of an underworld crime thug (Edward G. Robinson). See The Public Enemy and Scarface. Rinse and repeat.

Little Caesar was a big hit and made Robinson a star and became the gangster stereotype, see? His full name is Caesar Enrico Bandello, or Rico for short. Or Little Caesar because he is short. His buddy is played by Douglas Fairbanks, Jr. not to be confused with his far more talented silent screen star father. Well, at least Junior made it past 60. Junior’s Joe wants out because he falls in love with his dancing partner (Glenda Farrell) in one of the most unconvincing and chemistry-less scenes imaginable. Still, the love and dancing makes Rico think Joe is soft, see?

Pre-code films had to play a game. In order to show the sex and violence that audiences craved they pretended to offer a cautionary tale. See the evils if good men are not diligent? Few were fooled but it was enough to keep the censors at bay.

So, was Rico gay? Hear me through. Joe is soft, Rico thinks, because he loves a woman. Rico acts almost jealous, like a spurned lover. And when he is first on the lamb, where does he hold out? A fruit store. Reading too much into this, am I? Of course I am.

Somewhat entertaining and historically significant, Little Caesar codified the sounds and mannerisms of the prohibition gangster. And don’t think that the racketeer Influenced and corrupt organizations act name was just a coincidence. AMRU 3.


“Well, that was white of him alright.”

Posted by Fred Theilig at 9:04 PM No comments: 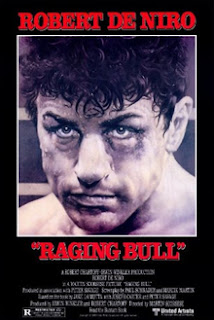 The life and times of a boxer with an anger management problem (Robert De Niro).

De Niro’s Jake La Motta is neither the protagonist nor an antagonist. He is simply the main character and we see the events of his life based on the autobiography of the same name. The story follows Jake’s successful fighting career and his relationships with his brother Joey (Joe Pesci) and his second wife Vickie (Cathy Moriarty). He has ups and downs, flies into fits of paranoid jealousy, and hurts the people around him. No real story arc except for life and age as it happens.

But the real genius here is De Niro’s acting is the outstanding cinematography. Filmed in black and white, many of the ring shots are works of art. While it won the Oscar for editing, it somehow lost out to Tess for cinematography. Somehow, maybe because one of the two cinematographers on Tess had died and the voters heart strings were tugged. (The other passed before the year was out). Or maybe they just loved the sexy scenes of barely legal Nastassja Kinski. Roman Polanski is a creep. Hey look, it’s Nicholas Colasanto! You know, Coach from Cheers. I’ve never seen him in a film before.

The movie is based on the autobiography of the real-life LaMotta whose career spanned the 1940’s until the middle 1950’s. Upon seeing the film he asked his second wife, depicted by Moriarty, if he was really that bad. She responded “You were worse”. He beat his wives (married seven times), was involved with organized crime, and served time for introducing men to an underage girl at his bar. He died in 2017 at age 95.

Raging Bull is a captivating story with excellent acting performances and photography that rises to high art. One has to watch it again simply for the slow motion fight scenes.

Posted by Fred Theilig at 8:20 PM No comments: