Hammer (Groucho Marx) is the owner of a failing Florida hotel. There's a bit of a love story, some songs, a jewel thief, but mostly it's a throw-away story designed around the Marx Brothers comedy. Chico and Harpo pretend to be interested in buying the hotel but in actuality just want to lift items from the guests, of which there are very few. Margaret Dumont is one.

All in all (dare I be sacrilegious) it's a very skipable movie. As the earliest true talkie I've seen, the sound quality was rather poor. They filmmakers had to soak the paper used in various scenes to keep the crinkling sound from overloading the recording equipment. It looked like cloth.

There were some funny scenes but not one of their best works. I saw their last and now their first. I'm sure the ones in the middle are much better. AMRU 2.5.

Hammer: Now here is a little peninsula and here is a viaduct leading over to the mainland.
Chico: Why a duck?

Posted by Fred Theilig at 7:55 PM No comments:

Young Jackie Rabinowitz is the son of a Jewish Cantor (apparently the dude who sings at Temple). He is expected to take over the family business, but young Jackie has different plans. After being punished for singing in a pub, he runs away and recasts himself as jazz singer Jack Robin (Al Jolson). Over time his new life as a rising star and his family ties collide when he must make a choice.
This is the movie that heralded in the era of the talkies, and overnight they became a craze. Interestingly enough, The Jazz Singer is not a talkie. Here is a little movie knowledge, courtesy a film philistine: sound films are not sound films because of spoken dialog. What distinguishes them is that the audio track is encoded on the film itself and synchronized with the moving pictures. Later Charlie Chaplin movies had no recorded dialog but were technically not silent because a synchronized sound system was used.
What happened here is that between songs, Jolson had to open his trap. He was supposed to go straight into his next song, but instead said a few words to the crowd. Those words? "Wait a minute, wait a minute, you ain't heard nothin' yet!" Truer words were never before spoken. Studio head Sam Warner insisted it be kept in the movie. Warner would die one day before the movie was released. He was 40.
As for the rest of the dialog: title cards. Seems obvious now to record ALL the dialog, but they didn't. There was a second scene were Jolson chats with his mother between songs. Which leads to another interesting aspect of the movie. The depiction of Jewish life. Not just having Jewish people, and admitting that they were Jewish, but actually depicting issues that matter to Jews regarding their culture. Remember, in To Be or Not To Be, fourteen years later, they never even used the word Jew once, and I considered it brave. 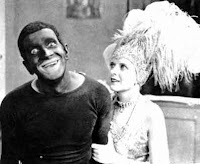 Another thing ... well ... let's just say that the logic and appeal of the minstrel show is lost on modern audiences. Me, in particular. Was it the collision of the realization that black music was pretty awesome and the fear of allowing them to play to white audiences? Was it meant to mock black performance? I don't even aspire to understand. But apparently Jolson in blackface served another purpose. It illustrated the dichotomy between the character's Jewish heritage and his desire to succeed in the wider American culture. Or so Wikipedia says. What do I know? The neighborhood I grew up in had about the same number of minorities as your average country club.
Anyhow, this was a movie worth seeing. Maybe worth seeing again. AMRU 3.5. Thank you Pub-D-Hub.

Posted by Fred Theilig at 7:46 PM No comments:

Walter Neff (Fred MacMurray) pays a visit to a client who's car insurance is about to expire. The Mr. Dietrichson isn't home but Wally likes what he sees with the Mrs. (Barbara Stanwyck). Eventually the Mrs. floats the idea of life insurance, in case anything unfortunate happens to the Mr. Of course the Mr. mustn't ever found out he bought it. Well, Walter smells a rat. And he likes what he smells. Together they plan how the insurance gets bought and how accidents can happen.

The fly in the ointment is Walter's boss, the savvy Mr. Keyes (Edward G. Robinson). You see, he has a "little man" that tells him something is fishy. Apparently Keyes' "little man" is a bit smarter than Neff's.

Excellent acting, great dialog, engaging story, Double Indemnity earned it's reputation as a great film. IMdb ranks it 55th all time (currently) and in the genre of film-noir it's third. I put a rush on watching it because Starz was making a hasty exit from the land of netflix, and while I enjoyed the movie, I can't say I love it up to it's reputation. I'll give it a 4.

So, what's the buzz about the movie? Apparently director Billy Wilder and co-screenwriter Raymond Chandler hated each other. Wilder would later say he flaunted his "womanizing ability" to torment the closeted Chandler. Wilder also had Stanwyck wear an ugly blond wig to give her a cheap, fake look. Later a studio exec remarked "We hired Barbara Stanwyck, and here we get George Washington".

"How could I have known that murder could sometimes smell like honeysuckle?"

Posted by Fred Theilig at 5:55 PM No comments: