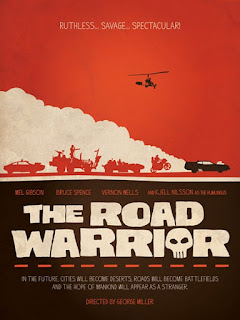 Character from the previous movie needs guzzaline and is alternately trying to be killed by people or enlisted to help others not to be killed. You see, there's these people in a compound that have fuel. These bad guys want in so that they can take the fuel. Max gets involved because, well, he just can't seem to avoid trouble. He don't say much.

I was rather critical of Mad Max and would have been hard pressed to see this one had two things not happened. 1) Fans of the series urged me to see 2 saying it was by far the best of the original three, and 2) I actually saw Fury Road in the theater. Really. An actual theater experience. Go figure. I immediately requested the Blu Ray from the library, as did everyone else in the state. Two months later, it came in. I skipped Thunderdome, for now.

The Road Warrior stands with the best of the 80's action flicks. The action was well paced and creative enough to keep you from visual overload. The story, while not exactly Doctor Zhivago, served the film very well. It stands on it's own perfectly, as it even changes elements from the first. Excellent visual storytelling. AMRU 4. Max 1 was terrible.


"I'm just here for the gasoline."

Posted by Fred Theilig at 10:23 PM No comments: 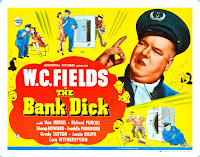 Egbert Souse' (pronounced Sau-SAY with the accent grave over the E) is a disappointment to his non-loving family. When a film producer complains about his drunken director while in the bar that Egbert frequents, he talks up himself as having worked in Hollywood. So, the producer offers him the job of finishing the film. You know, because that happens.

When two bank thieves scuffle and Egbert is credited with stopped them, he is offered the job as a bank detective (or "DICK" in the vernacular of the time). Why he drops the lucrative Hollywood gig to work in a bank is a mystery.

The next story element I am obliged to tell you about is when Egbert's daughter's boyfriend invests bank funds on a fraudulent mine, they have to keep the bank auditor away until the money can be replaced. Written by Fields, the screenplay is credited to "Mahatma Kane Jeeves", one of his little jokes. My hat, my cane, Jeeves.

The Bank Dick is not completely without laughs, but it isn't chuck full of them. Not painful to watch, but much of the humor doesn't translate. Shemp Howard was wasted as the bartender, given nothing funny to say or do. AMRU 3.

Posted by Fred Theilig at 8:59 PM No comments: 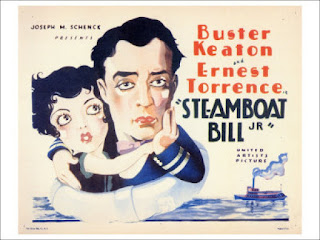 Town rich guy has a new steamboat that outclasses the old Stonewall Jackson. The Stonewall's captain, Steamboat Bill, learns that his son (Buster Keaton) is coming to visit. When Bill Jr turns out to be a "dandy", the father tries to toughen him up and teach him the ropes.

Buster Keaton stories are very formulaic, but Keaton's genius is all about his comedic bits and stunts. That's always the love interest, frequently tied to his adversary, that he must prove his worthiness to. He's always the misfit who triumphs in the end (oh, spoiler alert. Sorry about that.) And it's always entertaining because the visual storytelling is excellent.

The stunts more than anything carry Steamboat Bill, Jr. The big one being where the brick facade falls on Buster, positioned perfectly for him to pass unharmed through a second floor window. Real, full weight bricks were used and had he been out of position there would be no second take. Half the crew stayed away not wanting to witness his possible death.

The General still outranks all other Keaton films, but Bill Jr was quite enjoyable. It was the last he did for United Artists, having sold away his soul and creative control for the security of a regular MGM paycheck. That, a worsening alcohol problem, and the radical change brought by sound cinema ended his dominance in Hollywood.


"There's not a jury that would convict you."

Posted by Fred Theilig at 10:05 PM No comments: 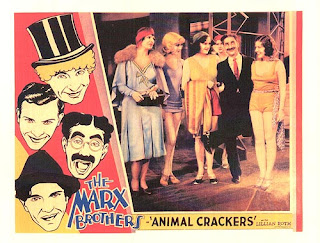 This is my fifth Marx Brothers film and they are little more than variations on the same theme. So, I was surprised somewhat that I could be somewhat surprised by this one. Every now and again would be a scene that was more than a bit strange. In one where Graucho is trying to convince Dumont and another woman to both marry him, he stops, says "Pardon me while I have a strange interlude", then steps forward into an intense and dryly comedic monologue while the women appear not to notice. Quite strange.

In another scene between Graucho's Captain Spaulding and Roscoe Chandler, an art expert, Chandler's Louis Sorin flubs his line. Graucho runs with it creating an almost uncomfortable but amazing moment. All done in long takes.

The Brother's second film is very uneven. Some gags were hilarious while some were tedious. Some songs were tolerable, while others weren't. Cut most of the insipid songs, a couple of the bits, and you'll have a first rate two-reeler. As is, simply on the power of a couple great bits, AMRU 3.5.

Posted by Fred Theilig at 6:50 PM No comments: 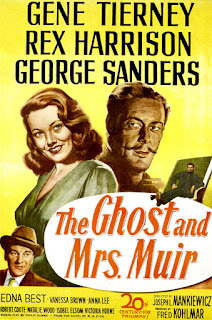 At the turn of the century, recent widow Lucy (Gene Tierney) rents a seaside house against the wishes of her in-laws and the realtor. Turns out the house is haunted by the salty sea captain (Rex Harrison) who committed suicide there four years earlier. Soon, love blooms.

The Ghost is a romantic drama period film. A post-war remembrance of a simpler time. Gene and Rex both are wonderfully restrained in their performances. Here the ghost-romantic drama was invented, later to be ruined by Ghost.

Anna Lee, right off her success in Bedlam, has a small role. Her on-screen charisma muted to fit the roll. Lucy's daughter is a young Natalie Wood. The Gaelic word "muir", I learned, means "sea", the only woman a sailor can truly love.

The Ghost and Mrs. Muir is a very well crafted if cloyingly sentimental film. The sets, acting, and dialog is spot on, but there are no mysteries here. If you are surprised where the story leads, then you must hide your own Easter eggs. This movie is exactly what it intends to be. Tone and performances are spot on. Not exactly in my wheelhouse, but enjoyable never-the-less. AMRU 3.5.


"My dear, never let anyone tell you to be ashamed of your figure."

Posted by Fred Theilig at 9:37 PM No comments: