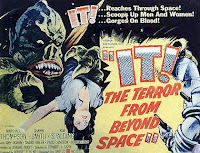 Curious where "Beyond Space" is? Apparently, it's on Mars.
In the futuristic date of 1973, an expedition crashes on Mars. The only survivor is Colonel Carruthers (Marshal Thompson), who is accused of murdering the rest. They send a second expedition to Mars for the purpose of bringing Carruthers back to stand trial. Sounds reasonable.
They collect Carruthers and start their trip back to Earth. There he details his air-tight alibi: the crew was killed by an evil monster from the mist. Nobody believes him. Until members of this crew start disappearing.
When the air lock was open, they apparently picked up the most horrible of terrors: man in a rubber costume. He hides in the cargo hold using the most advanced of camouflage techniques: duck behind boxes.
Well, it's good to see that in our distant future, women have earned the right to perform such important tasks, like to clean up after the men, pour them coffee, and comfort them after they do battle with the nasty monster. Viva liberation!
Not much of a movie. I vacillated between 2.5 and 3, but in the end I decided to be generous. It was kinda fun. And short.
Posted by Fred Theilig at 6:32 PM No comments:

The movie starts with Marshal Will Kane (Gary Cooper) marrying, apparently, his granddaughter (Grace Kelly). While in the literal process of hanging up his tin star, he learns that his old nemesis' homies are back in town, waiting for the Noon train. Could this mean trouble?
Apparently so. Seems that said nemesis was released from prison. Might he be on the aforementioned train? Hmmmm? Of course he is. Maybe he has it out for the man who put him behind bars? Hmmmm? Of course he does.
Marshal Kane's close friends try to convince him to turn chicken and run, but that doesn't sit well with 'oll Coop. So instead he tries to get a posse together to stand bad Frank Miller down. This is where it gets tricky.
It seems that not everyone is all that willing to get involved. Young Lloyd Bridges wants a hand-out, the previous sheriff (Creighton Chaney) is chicken, and some townsfolk side with Frankie. What's going on? Maybe this isn't a simple morality tale. Maybe there's some complexity to Marshal Kane. Maybe he isn't the hero he (and his delicious wife) think!
Nope, it's a straight up morality tale. Kane = Good, Miller = Evil, and the townsfolk who don't stand behind our hero are all yeller. What we have here is an allegory for McCarthyism, and not everyone in Hollywood was willing to stand firm.
51 year old Cooper was a fading star when he took the role. Not only did this revitalize his career (bleeding ulcer and all), it's rumored he bagged 22 year old Grace in the process. Not too shabby for the old mule.
Well made movie, almost done in real time. Clocks feature prominently showing how close we are to High Noon. Well acted and directed. It's considered the greatest slight in Oscar history when it lost best picture to some DeMille circus movie. It's my favorite movie of '52. So far. ARMU 3.5.
Posted by Fred Theilig at 5:52 PM No comments: 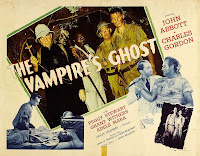 Strange things are afoot in an African village. People are dying and the natives suspect a vampire. Thank god whitey is there be the voice of reason. Hunky Roy decides to enlist of good friend Webb Fallon (John Abbott) to investigate. Webb runs a casino a short walk away, apparently in the Caribbean.
Webb agrees to help and meets Roy's hottie girlfriend Julie (Peggy Stewart). Every now and again subtle hints that Webb is in fact the vampire are slammed repeatedly over our heads. Spoiler alert: he is.
Anyhow, vampy Webb wants to steal hottie Julie because that's what vampires do, hunky Roy tries to reason with him, bad stuff happens, and with the help of Father Gilchrist, hunky Roy saves the day.
Not much to say about this Republic quickie. Decent acting, decent pacing, somewhat interesting story. Nothing too original. Set in Africa yet few black faces are seen on screen, and none were major characters. Typical of the day. At least they get credit for figuring out who the baddie is first, even if that doesn't save their lives. AMRU 3.
Posted by Fred Theilig at 4:54 PM No comments:

Mr and Mrs Gilbreth pack up their twelve children and move from Providence, RI to Montclair, NJ. I bet they have a lot of crazy adventures along the way. Yea. Well, that sums up the story.
This movie is a fairly faithful adaptation of the book by the same name, written by the actual eldest Gilbreth daughter. Old friend Myrna Loy plays the Missus Gilbreth and Clifton Webb plays dad. Frank is some sort of process engineer and work has dictated he move from a post-industrial, mafia run city to, well, New Jersey. Not exactly culture shock. The book and movie were successful enough to spawn sequel book and movie called Belles on their Toes (1952). Most of the cast came back.
Cheaper by the Dozen is a well produced, well acted, first class work and I was about a half hour into it when I decided that I wasn't enjoying it much. 50's family comedies aren't my thing, I suppose. I watched too much Brady Bunch growing up. That's not to say it was hard to watch. I just didn't find their predicaments all that funny and I kinda didn't care what happened to them.
Speaking of the Brady's, I went into it thinking this was the movie that inspired the series. It's not. That movie was 1968's Yours, Mine, and Ours.
Well, who should show up as a lesser daughter but Barbara Bates, fresh from her Inspector General success and still years away from her tragic suicide. I wasn't sure if I could believe Webb as the father of twelve, but he managed to pull it off. It was nice to see Myrna again, looking very matronly, almost unrecognizable from her Nora Charles. In fact this encouraged me to see if I couldn't find some of her later work. I found the Burt Reynolds comedy The End (1978). She had a small part as Burt's mom and I had to pause it on her face to take in the fact that this was the same person.
Well, as the great-grandson of a Providence couple who managed thirteen children (twelve to survive into adulthood), I am guessing my ancestors life looked little like the onscreen Gilbreth clan. But 50's cinema wasn't about reality. Contemporary audiences didn't care, so why should I? AMRU 3.

Man on street: Hey Noah, what are you doing with that Ark?
Frank Gilbreth: Collecting animals like the good Lord told me, brother. All we need now is a jackass. Hop in!

Posted by Fred Theilig at 5:37 PM No comments:

I was looking for another serial. Something I can watch an episode of when I didn't have time or didn't want to think too hard. The Three Musketeers sounded good. Besides it features early work by some big names. How quickly I was disappointed.
The Musketeers in this version resemble less the work by Dumas and more the work of some dumb ass. These musketeers are soldiers in the French foreign legion and closer akin to stooges than anything else. Anyhow, back to the story, as it were.
John Wayne is Lieutenant Tom Wayne (seriously?), hotshot American flyer. In the right place at the right time, Tom saves the lives of three men, Clancy, Renard, and Schmidt, who call themselves The Three Musketeers. The Musketeers in turn decide they will help out Lieutenant Tom whenever he needs it. Over the twelve chapters, that turns out to be a lot.
The French are fighting in the middle east, but in this picturesque setting there is controversy. Apparently there are Arabs who don't fully appreciate their French overlords. They actually want to throw them out, the ungrateful brutes! They are led by a mysterious person known as El Shaitan. Helping him out is a young Lieutenant Armand (Creighton Chaney credited as "Creighton Chaney") who also happens to be the brother of young Tom's sweetheart Elaine. Armand has a change of heart, and therefore is murdered by the villainous El Shaitan. Of course Tom has to stumble into the scene at just the wrong moment to get him accused of the murder.
There is a missing letter that clears Tom, some stuff about weapons trafficking, and lots of guesswork as to who this Shaitan character really is. Tom and the gang get into one pointless fight after another, there are narrow escapes typical of the genre, and lots of fancy horsemanship, if you're into that sort of thing. In the end, well, you can guess it.
I started this serial quite a while ago. Back in cold weather, actually. It took me so long to complete because it really wasn't all that interesting. In fact, I would certainly have given up on it had the likes of the Duke, Creighton, and a young Noah Beery Jr. not been in it (the later two, just barely). I'll be more selective for my next serial.
I'll say this, though. It was quite clear even then that Wayne could command a scene. Not knowing who he was, I could see guessing that he would go on to bigger things. The restored version still had fairly a poor audio tract, and the flashbacks made me think once I was accidentally watching the same episode a second time. Not intended to be a historical document, it succeeds in that modest goal. For me, I should have skipped it. AMRU 2.
Posted by Fred Theilig at 5:08 PM No comments: