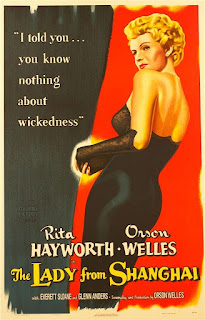 Having burned his way out of town, Orson Welles focused on the stage. In order to get his stage musical financed he promised to make a traditional, Hollywood, action thriller. What he actually made was a two and a half hour mess. He wanted voice level to be almost too low to hear and blast the audience away with sound effects. Because EvErYboDy lOvEs ThAt! Fortunately, studio meddling turned it into something watchable.

Our hero is poor Michael O’Hara who is actually Orson Welles with an Irish Accent. He earns a job on a rich lawyer’s yacht by hitting on his hot young wife (Rita Hayworth). And by saving her from thugs. There he continues his infatuation with hot Elsa and gets caught up in what we here are referring to as ‘intrigue’.

Hayworth was Welles estranged wife at the time, fun fun. He had her hair cut and bleached, which was a no-no back in the day. Rita’s strawberry blond hair was her trademark and you just don’t go messing with studio property. Were you to film in Fenway park you don’t go and paint the Green Monster blue. Welles was his own worst enemy.

I refrain from spoiling the story but in actuality the viewer has no clue where it's going for the majority of the runtime anyhow. Even Welles' O'Hara seems to have a dumbfounded expression on his face throughout the film. Studio boss Harry Cohen said he'd never hire the same man to produce, direct, and star in a film because he could never fire him. But, you know, Cohen was an ass.

Film purists will defend Welles artistic vision, but that’s not what he promised the studio. Maybe his version would have been a masterpiece, but he hadn't earned the right to make it. Not from Hollywood's perspective, at least. What we got was an interesting, weird as hell, and watchable hour and a half long film. AMRU 3.5.


“George, that’s the first time anyone ever thought enough of you to call you a shark. If you were a good lawyer you’d be flattered.”

Posted by Fred Theilig at 11:12 PM No comments: 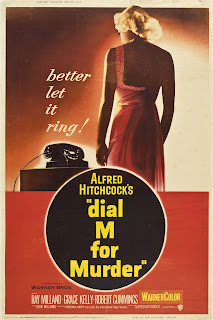 Tony (Ray Milland) discovers that his rich hot wife (Grace Kelly) is having an affair, so he arranges for a complicated hit on her. When that doesn’t pan out, he tries to frame her for a murder. And everyone lived happily ever after.

Whenever you plot to kill the hot, hot Grace Kelly, you cannot be the protagonist, but Milland almost pulls it off. He gets the bulk of the screen time, is charming almost to a fault, and you can almost see his point of view. Almost. Ex-tennis pro Tony is a manipulator. If the rich Margot divorces him he loses his means to a comfy lifestyle. If she dies, he takes it all. He manipulates the would-be assassin with surgical precision. When things go awry he tries to engineer his way out of things, manipulating Margot in the process. A true master at work.

Ray Milland was a better actor than his reputation. He did a bunch of forgettable light rom-coms but his better work (The Lost Weekend) proves his ability. Dial M for Murder is a better work. Cary Grant was considered for the role but Cary must always play nice guy.

Filmed almost entirely in one room, the studio decided to make it 3D. Hitch had no interest in even making the movie, but he was contractually obligated. Not exactly a recipe for success but this is Hitchcock we are talking about. It was a great stage play and Hitch’s tenacity made it an excellent film. Then he made Rear Window.

Dial M for Murder is a smart, charming story. It is very wordy in a good way and the crime plan is very well thought out. There is no real mystery except to see how it all plays out. It’s Hitchcock at the top of his game. In his top five, for sure. Mom would have loved it. AMRU 4.

Posted by Fred Theilig at 11:35 PM No comments: 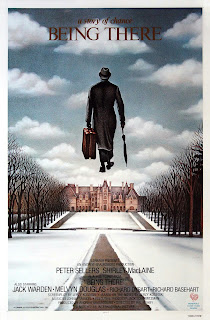 Chance (Peter Sellers) is a simple man who tends the garden for an old rich man. When the old man dies in his sleep, he is forced to leave the estate for the first time. He is injured by a parking car owned by a rich industrialist and DC power broker. Fearing he will sue, they take him in and mistake his simple speech for deep insights. Simpleton Chance the gardener becomes Chauncy Gardiner, philosophical guru.


Peter Sellers was nuts. He became so engrossed with the characters he play that he didn’t know who he was between projects. Panther director Blake Edwards thought him mentally ill with no real personality of his own. Friends would be confused when they would see him after a significant absence and find him to be a different person. There are so many weird stories about his life that I am surprised a biopic hasn’t been made.

Once inside the fancy Rand estate, Chauncy befriends another sick old man Benjamin (Melvyn Douglas), who is a close friend of the president (Jack Warden). He also attracts the affection of Ben’s wife Eve (Shirley MacLaine). Chauncy likes to watch.

Most of Being There is people interpreting Chance’s words as insightful or clever, filling in the gaps themselves as a sort of conversational Rorschach test. In one scene Chance is in an elevator, sitting in a wheelchair, chatting with the man helping him to his room. Chance says he’s never been in “one of these before”, meaning the elevator and the man assumes he means a wheelchair. They continue conversing without knowing they are talking about different things. It’s a masterful scene.

Being There is a unique film and Sellers was brilliantly understated in his role. Nominated for an Oscar, he very well may have deserved it. He was nuts, but he was also a genius. AMRU 4.


“I have no claim. I don't even know what one looks like.”

Posted by Fred Theilig at 10:29 PM No comments: