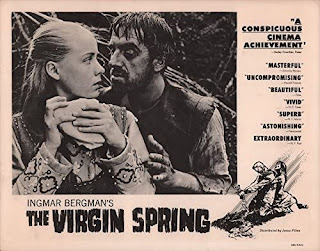 A farming couple sends their young, spoiled daughter to church to deliver candles. Along for the ride is their pregnant and wayward servant girl. Things don’t go well.

Based on a Swedish folk ballad and inspired by Kurosawa’s Rashomon, director Ingmar Bergman was disappointed with the result. The Rashomon link is how everyone involved evaluates their role in the tragedy and how the events unfold. Yes, I’m being intentionally vague.

I find Bergman films more accessible than his reputation. The events here are pretty straight forward, simple really. The viewer is left to consider everyone’s response and maybe what the end means. Most synopses will detail more of the story but I’d rather not reveal too much. And I suppose I agree with Bergman to a point because I find it to be the least interesting of his films I’ve seen so far. But it is still an interesting and visually attractive film, and Birgitta Pettersson is adorable. I hope your day goes better. AMRU 3.5.

Posted by Fred Theilig at 11:33 PM No comments: 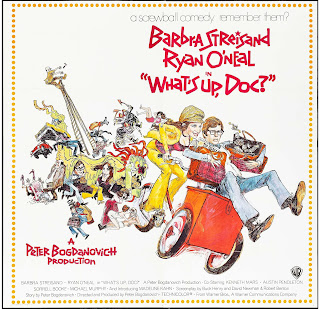 An engaged musicologist (Ryan O’Neal), a man carrying government secrets, jewel thieves, and a crazy woman (Barbra Streisand) cross paths in a San Francisco hotel. Each has an identical overnight bag that is confused for the others. Zany antics ensue.

What’s Up, Doc? legitimately feels like a Warner Brothers cartoon but also takes inspiration from classic screwball comedies, principally Bringing Up Baby, and other classic films. O’Neal’s musicologist is Grant’s paleontologist. The film is packed with classic film references. Streisand plays As Time Goes By from Casablanca and insists on calling O'Neal's Howard ‘Steve’ as Lauren Bacall’s character does to Bogart in To Have and Have Not. The references are too numerous to list.

There’s not much else really to say of the story other than Streisand is relentless in her pursuit of Howard, Howard is helpless in everything he does, and mobsters and g-men are incompetent. Screwball to the end, which is fairly satisfying.

The absurdist nature of the comedy is somewhat off putting at first, but it grows on you. Barbra is quite charming as a crazy lady, Madeline Kahn is the perfect unlikable fiancee, and the crazy pace is kept up throughout. It's an amusing and unique comedy, if not hilarious. AMRU 3.5.

Posted by Fred Theilig at 11:39 PM No comments: 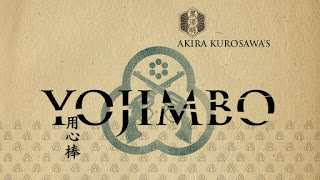 A Samurai (Toshiro Mifune) wanders into a village with a problem. Two warlords are in conflict for control of the village and the only person profiting is the casket maker. He decides to stay and play both sides off each other for profit. Yojimbo means bodyguard.

Director Akira Kurosawa wanted to reinvent the western for Japanese audiences. Taking inspiration from John Ford, he crafted a new kind of western in the form of a Samurai film. He even included a gunfighter, the very western looking Tatsuya Nakadai.

Kurosawa just seen his Seven Samurai remade into a Hollywood western and Yohimbo would follow suit. The story would be taken in whole cloth by Sergio Leone for A Fistful of Dollars, sparking a lawsuit.

Set in a humble village and filmed in black and white, Yojimbo looks fantastic. Even in rain the visual popped. The gang’s henchmen move like a comedic dance troupe, acting brave but clearly craven. It’s a serious film that uses levity to its advantage. It is visually stunning in many ways.

Maybe I didn’t enjoy the film as much because I already knew the story because I saw Fistful … holy crap, eleven years ago! Still, I remembered it well. People may find Fistful more accessible because it was filmed in “English” but Yojimbo is clearly the better film. AMRU 4.
Posted by Fred Theilig at 1:00 PM No comments: 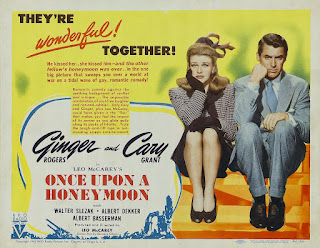 It’s 1938 and an American with a past (Ginger Rogers) is engaged to an Austrian Barron, who may or may not be a Nazi (he may). Newsman Patrick (Cary Grant) is dying to get an interview to find out who she is and more about this Barron guy. Gosh, she sure is pretty.

Ostensibly this is just a Cary Grant/Ginger Rogers rom-com with war as a backdrop, but the stakes are raised as they try to avoid the Nazi’s and do … whatever it is they are trying to do. Unfortunately, the screenplay was, as Grant famously said, rubbish. Bad dialog, bad jokes, scenes that either undermine the tone or simply don’t work. It could have been so much closer to mediocre.

Interestingly this is one of the few war films of the time that make a direct reference to Jews. There is a Jewish maid whose life is in danger and our heroes even visit a concentration camp. They deserve credit for that even if the tonal balance was way off. It wanted to be a serious war film but with a love interest and star power, but it failed in the execution.

Our Jewish maid is played by Natasha Lytess who was Marilyn Monroe’s acting coach. They were close friends and outlived her by less than a year. Cancer is a bitch. A young Nazi is played by a slim John Banner, Sargent Shultz himself. I rewatched the scene to see if I could spot any Shultz in his face. I could not. What a difference twenty years makes. And sixty pounds.

Director Leo McCarey has a better than fair reputation, but I can’t help but lay the blame at his feet. The writer provides the script and the studio provides the resources, but the director has to make it all work. And it didn’t. He could have evened the tone and made sure the scenes had weight. I think he just went with what he was handed. AMRU 2.5.

Posted by Fred Theilig at 10:08 PM No comments: 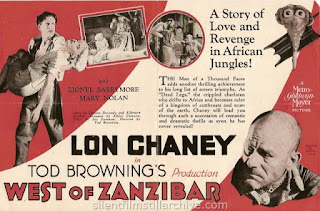 The wife of circus magician Phroso (Lon Chaney) leaves him for another man (Lionel Barrymore) and in the scuffle, Phroso is injured and loses the use of his legs. Wife Ann returns dead (not sure how that happened) with her lover’s child. The treacherous Crane becomes an ivory trader in Africa so Phroso follows suit to plot his revenge.

It has been over five years since I saw the talkie remake but I remember the major beats of the story. The biggest difference in this shorter version is that the backstory is fleshed out better. If memory serves the remake starts in Africa and we learn in hindsight about the wife, child, and treachery.

So, Dead-leg’s plan is to lure Crane to his compound to show him his daughter, raised in a brothel and abused by Phroso. Based on the same play, both movies play out the same. Walter Houston starred in the stage version and Chaney was perhaps the perfect substitute at the time. Mary Nolan, cast because she had "tragic eyes", is exceptional as the horribly abused damsel. She would later take her own life. Probably.

It would be hard not to compare the two films, the biggest difference being the sound element. Both are pretty ugly films aesthetically, in subject matter, and in how they treat the Africans. The natives are primitive and childlike, easy fooled by sleight of hand and parlor tricks, allowing the white men to become like kings. All this while not being able to walk.

West of Zanzibar is an interesting, if a somewhat hard to watch film. The people and events are not pleasant, but that's what makes it stand out. AMRU 3.
Posted by Fred Theilig at 10:40 PM No comments: 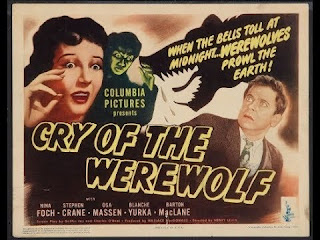 The estate of a lady werewolf is now a museum based on her legend. When her tomb is located her gypsy daughter is determined to protect it. Oh, and she’s a werewolf too.

Taking a cue from Son of Dracula they set the story in Louisiana, but still gave it an Eastern European feel. Nobody spoke with a southern accent and they wore winter clothes inside and out. It was December, but it still felt out of place.

The story centers on the son of the museum curator and a pretty museum worker from Transylvania. Gosh, they sure do make a cute couple. They are trying to solve the mystery of the professor’s death. And so are the cops. They have trouble putting it all together despite having all the clues handed to them. Suspicious people act suspicious.

I wanted to like Cry of the Werewolf. I really did. I wish I could edit the script while watching to fix the dialog and straighten the story out. It wouldn’t have been that hard. But it could have used more than a little tinkering. We know all the secrets early on. There is no mystery, no ambiguity, and it's a shame. I think the filmmakers simply didn’t want to ask much from the audience. We got them into the theater, why make them pay attention?

Clearly there was no budget for makeup and special effects. The wolf transformation is simply a dissolve from the shadow of the Gypsy Princess to that of a medium sized dog. Couldn’t even afford a big dog. And don't get me started on the rubber bands. On the plus side, Nina Foch was very good as the Gypsy princess trying to protect her mother’s grave. She went on to a long, successful career, so don’t feel bad for her.

As I said, I wanted to like this film, but it felt like the film didn’t want to be liked. An atmospheric werewolf story set in a spooky museum and a gypsy camp has promise for a B horror film, and the performances were pretty good. But clumsy dialog and an underdeveloped story sabotaged this effort. AMRU 2.5.

Posted by Fred Theilig at 12:43 AM No comments: 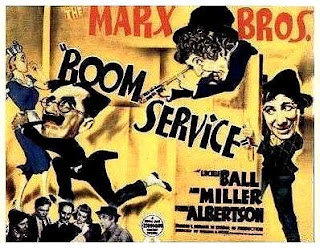 Stage producer Gordon Miller (Groucho Marx) is scamming the hotel where his acting troupe is staying, while trying to find a financial backer right up to opening night. The writer shows up to play the Zeppo character.

This is the first Marx Brothers film not specifically written for them, and it shows. Apart from a couple thrown in bits, there is very little of the Marx Brother style. No Margaret Dumont, and little verbal wordplay or insult comedy. They didn’t even give Groucho a funny name. But when compared to earlier films, it does have a more conventional story line. For a screwball comedy, that is.

The premise is that the play has no financier, the writer arrives looking for his payout, they’ve racked up huge bills, and the hotel is being audited. In other words, zany antics ensue. Lucille Ball has a sizable role, even if they give her little funny to say. Ann Miller appears for no other reason than to give the playwright a love interest. She was fifteen at the time. Why does this keep happening?

Room Service is a lesser Marx Brothers film, and the only one they did for RKO. I can’t say I laughed audibly at any time, but it is by no means unwatchable. Thank god they didn’t include a boring harp solo. AMRU 3.
Posted by Fred Theilig at 5:42 PM No comments: