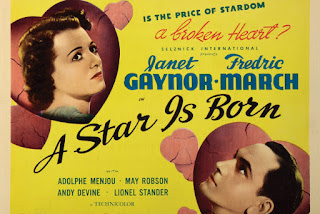 Ingenue farm girl Ester (middle-aged Janet Gaynor) dreams of silver screen quotation, so she goes to La La Land with Grammy’s approval and financing. There she friend-zones an aspiring director and learns that they don’t make you a star just because you ask. When working a party she catches the eye of famous (and famously difficult) actor Norman Maine (Fredric March) and he is smitten. He muscles her into a few gigs and she becomes a big star. They fall in love while Norman’s career circles the drain.

Far from a Hollywood unknown, Janet Gaynor had a decade long career before doing A Star is Born. In fact, hitting the brick wall that is 30, she did two more films before being relegated to the occasional TV guest appearance. More likely it was because of her 1939 marriage, but the first narrative sells better copy. And Fredric March, far from a fading star, went on to an extensive career lasting over thirty years more.

A Star is Born (1937) is best known for having been remade in 1954 with Judy Garland and James Mason, which was remade in 1976 with Barbra Streisand and Kris Kristofferson, which was remade in 2018 with the Gaga and Bradley Cooper, but apparently the story bares a closer than casual resemblance to the 1932 film What Price Hollywood? With Constance Bennett and Lowell Sherman. When Hollywood sees a good formula, they know to overdo it. I’d also like to point out that at no point here did they actually cast a young unknown in the lead role. Brave.

Maybe the story was lifted from What Price Hollywood? Or maybe it was inspired by rising star Barbara Stanwyck’s marriage to spiraling leading man Frank Fay, or maybe by drunken has-been John Barrymore who has cast in the Maine/March role but couldn’t remember his lines because he was a drunken has-been. Maybe all and more. Anyhow, Star is an amusing melodrama with charming characters and good on-screen chemistry. Let’s see if I can see the other three (or four) before the year is out. AMRU 3.5.

Posted by Fred Theilig at 9:49 PM No comments: 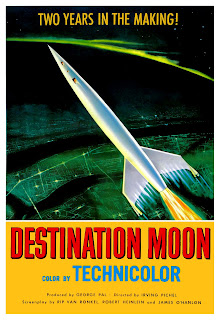 American industrialists band together to send a rocket to the moon because he who controls the moon can blow up the earth. You just know the US government aren’t going to bother, so our heroes do it for them. They are denied clearance to test the atomic engine so they just take off to the moon. Seems reasonable. They choose for their astronauts themselves.

Here I have another high concept sci-fi film with fairly little story. The characters are stock, we learn little of their nature, and there is no personal growth. But what we have is a pretty good technical depiction of actual space travel. From lift-off g-forces, to weightlessness, to many technological problems they face. Call the cooperative group NASA and make the rocket fuel liquid hydrogen and Destination Moon would resemble a documentary. Almost.

Despite the lack of real story I enjoyed watching Destination Moon for the space-nerd aspect of it. A modified version of a Woody Woodpecker cartoon shown in the film was actually later used by NASA to explain the realities of space travel. There were no preposterous moon monsters or unexpected meteor showers (ummm … spoiler alert?), just real science. Launch windows, escape velocity, and inertia. It was truly ahead of its time although Hollywood would eventually discover that fantastical foolishness was more marketable. It was the OG of 50’s rocket and saucer genre even though the slapped together and vastly inferior Rocketship X-M beat it to theaters. Destination Moon defined a sub-genre that influenced a generation. AMRU 3.5.

Posted by Fred Theilig at 11:15 PM No comments: 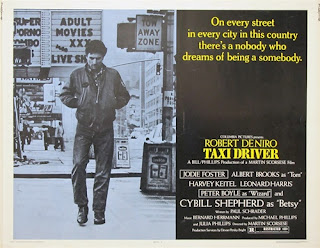 Troubled ‘nam vet Travis Bickle (Robert De Niro) drives a taxi at night because he can’t sleep anyhow. He becomes infatuated with a hot blonde way out of his league, becomes interested in politics, and befriends a pre-teen hooker. Stuff happens and they all live happily ever after. Or Do ThEy!!!

Taxi Driver doesn’t fit genre nor narrative conventions. Is Travis a hero, tragic figure, villain, or just a character in a story? Is it a film about racism, desperation, or just graphic violence? Travis rails against the filth and scum but we are not directly led to his racism, but nor are we led away. Take that what you will. This isn’t film criticism, here. I’m not that good. Suffice to say this is the film that earned Martin Scorsese his reputation.

I do want to explore the idea of crossed communications. You’ve seen it, two people holding a conversation thinking they were on the same page but in fact they were not. We see that here between Travis and the other cab drivers, the hot Betsy, and the candidate Palantine. He thinks they understand each other, but they don’t.

Taxi Driver is a fascinating film. The cinematography is fantastic, the ending enigmatic, and it stays with you, almost hauntingly, long after viewing. Interestingly it has the same flaw as Pulp Fiction: The director’s acting performance. Little piece of vanity spoiling the masterpiece. Still, it’s a fantastic film. AMRU 4.

Posted by Fred Theilig at 7:14 PM No comments: