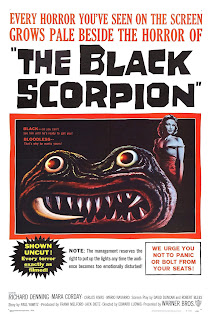 Geologists studying a volcanic eruption in Mexico discover that earthquakes have released giant prehistoric scorpions that were entombed in obsidian (or Dragon Stone). The process of holding a living creature in suspended animation inside a volcanic rock is known to scientists as bull shit (Bovem de Stercore to be scientific about it). Our heroes fight the monsters, find love, and everyone lives happily ever after.

Not many good films begin with voice over narration, and this is no exception. Here we cover all the elements that worked in better giant bug movies (Them!, Tarantula) and do it for a fraction of the cost. What we have is a formulaic, predictable, and reasonably pleasant waste of 81 minutes.

And the lack of a budget is on clear display. Most of the movie appears to be done with rear projection. A train is barrelling down the tracks towards a giant scorpion. The scene is tediously lengthened to increase suspense (spoiler, scorpion eats the train) so we see the train miniature (literally named Lionel Lines) pass by the same rock face at least three times. Another shot of a series of stop motion scorpions crawling out of a cave or crevasse is reused several times throughout the film. But this isn’t the worst of it. Money completely ran out before they could finish the major fight scenes so the scorpions appear as black silhouettes. Downright confounding.

I saw this one as a kid on Creature Double Feature way back when. I didn’t think much of it at the time but at least it wasn’t yet another ‘zilla film they were always throwing at us. With adult eyes I found it likable for what it was. Yet another bug film but with a certain charm. Set in Mexico, gringos got most of the lines, but I felt they were respectful of the culture, at least by 50’s standards. Under the best conditions nobody is frightened by scorpions when they have already been menaced by tarantulas, so don’t go looking for scares.

The Black Scorpion is what it is. Unoriginal, forgettable, and predictable. But I kinda liked it. AMRU 3. I suppose I have to see The Deadly Mantis now.
Posted by Fred Theilig at 9:53 PM 2 comments: 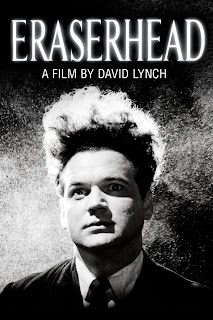 Henry is invited to dinner by a girl to meet her parents. There he discovers that she’s had a baby. She thinks. That is, she thinks it’s a baby. Now they must get married. This is Henry’s nightmare, and maybe yours.

Eraserhead fades between a surreal dream-like half fantasy, into a disturbing total fantasy, then back again. We don’t always know what is sorta real and what isn’t. What we see is a bizarre man living in an unsettling world filled with disturbing images that don’t quite make sense. It’s an anxiety filled dream in a fantasy landscape that only vaguely resembles reality.

What’s the meaning on the Man in the Planet? The worms? The hair? The poodle-girl in the radia-tair? Sorry, mon frere, but I’m not going there. What is clear is that Henry lives in a low rent, disturbing, unsatisfying, sometimes hostile world and is unexpectedly saddled with a special needs child he had with a woman who barely tolerates him. What better food for nightmare could there be than this?

An amazing thing about this film is how consistent the tone is, despite the fact that production took five years to complete. A character sees something gross and disturbing and we look to the characters reaction to judge what we are to think of it. Is it normal is this world or the height of horror? What we see is a reaction halfway between. Jack Nance kept the iconic hair-do for the duration of the shoot. Jack would later die from injuries sustained in a brawl outside a donut shop. And so it goes.

Eraserhead is an enigmatic, bizarre, and fascinating study in world building. I’m certain some of the images are there just to confound, but it completely sets the tone. The viewer is in for a ride. AMRU 4.

Posted by Fred Theilig at 6:38 PM No comments: 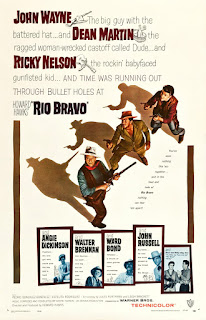 While harassing the town drunk (Dean Martin), bad guy Joe shoots a man trying to intervene. Sheriff Chance (John Wayne) locks him up but bad Joe happens to have a rich and influential brother who doesn’t want baby bro to stand trial. Now our Sheriff has to stand down ruthless cutthroats with deputy drunk and grandpa Stumpy (Walter Brennan). Hottie Feathers (Angie Dickinson) shows up because why not.

What the hell is Ricky Nelson doing in this film? For the uninitiated, Ricky Nelson was a pop singer, teen heart throb, and star of The Adventures of Ozzie and Harriet. Think a nineteen year old Justin Bieber if he had a smidge of acting talent. The studio pushed him onto Howard Hawks who gave him the fewest lines and fairly little screen time. Guys of the day found it a little bit easier to convince their gals to see a western.

The luster started to diminish on Wayne’s career, his last few films not doing very well. The answer was to fall back on the John Wayne character which he successfully did into the 1970’s. Gone were the days of out of character roles and non-genre pictures. Not a bad trade off, really.

I suppose the point of adding the Dickinson character was to raise the stakes for our hero. Sassy and independent as she was, Feathers was still a woman that needed protection. 24 years her senior, Wayne was uncomfortable with the love scenes. Angie looked plenty comfortable to me.

I never thought of Dean Martin as a serious actor. Comedian and singer, but never an acTOR! But to be fair, this is the first feature I’ve seen him in, maybe ever. And he acted the living crap out of it. The Dude was a complex character with nuance and a real character arc. This was by far the best film he appeared in and I don’t expect that his other performances will match up.

Rio Bravo is a film school staple and a favorite of Quentin Tarantino. It is a very interesting film and the opening shot is quite good, but in the end it is just a hero's tale. Serve justice, save the town, get the girl, and leave the character growth for the people around you. AMRU 4.

Posted by Fred Theilig at 11:54 PM No comments: 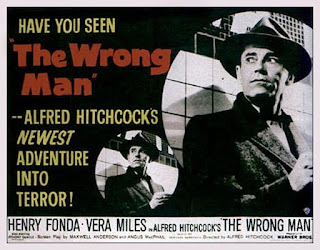 Broke Musician Manny (Henry Fonda) tries to borrow against his wife’s life insurance policy to pay for her dental work and is mistakenly identified as an armed robber. Other eyewitnesses positively identify him as the assailant and his handwriting matches the notes. His world swirls down the crapper while his hot wife (Vera Miles) goes off the rails.

Manny is an aw shucks nice and honest man. Kind to his mother, patient to his wife and child. We know this because Hitch beats us over the head with it. Repeatedly and to the point that it  longer than the hour forty five run time. Also, have I pointed out that he was THE WRONG MAN? Oh, we did? Good. Sometimes suspense comes at the expense of subtly.

Not one of Hitchcock’s top films, in fact I judge it pretty low on his list. Maybe lowest if his post war work, be he had done so many it’s hard to say. Not that it is tragically flawed. Not compared to Rope and Strangers on a Train, which were less boring. Fonda’s Manny is two dimensional and uninteresting. Also at 50 he was 24 years older than wife Vera Miles. Creepier still, they had an eight year old boy. Maybe the most interesting part is Miles’ performance in the third act. She played the standard dutiful wife up to that point before the stress really takes its toll.

Only Hitchcock film for Fonda but Vera will also star in Psycho. Least interesting of the post-war Hitchcock (so far), but still manages an AMRU 3.

Posted by Fred Theilig at 12:33 AM No comments: