Dracula (John Carradine) needs help. He hates the life of the undead superhero, so he seeks out the good Doctor Edelmann. Surely he can solve the problem. Drac gets all mysterious what with him needing to only come only at night. Under the microscope, Dr. Edelmann discovers that Drac's blood contains a large number of midi-chlorians ...

Also seeking free help is Lawrence Talbot (Lon Chaney Jr), hating his proto-wolverine existence. Doc concludes Chaney's head ... that is, Talbot's head ... isn't soft enough. Meanwhile, Drac starts making moves on Doc's lovely-ish assistant, wolfie jumps a cliff trying to end his life, and they then stumble upon Frankenstein's Monster sitting in the muck. And it's about then that I realized that this series has finally run it's course.

The problem of crowding the film with monsters is two-fold. First, you lose focus on a central story. Are we following Drac's plight or Wolfie's? Secondly, screen time for each is drastically cut. Frank's Monster is barely in it and Drac makes an earlier than expected exit. Maybe it would have worked better if you made the monsters the direct protagonists rather than spiral the story around the doctor and his assistants. Still, make the climax a duel between wolfie and Drac, and lose the Monster instead of using him as a Deus ex machina of sorts. Better movies don't have you re-writing them in your head while watching.

Code standards has that monsters must die at the end of the film. As such, there has to be a vaguely plausible explanation why the actors were getting work again. We completely forgo this in Wolfie and Drac's case. Lionel Atwill, at death's door, makes one last appearance. As a cop, once again. And no Universal Horror can be considered complete without a hunchback assistant. Here is the only unexpected twist the film offers: the hunchback is a hot chick. Seriously. And the mad scientist character is ... well, I'll hold off on that.

Here we rest the original run of the Universal Horror series. Typical in acting and production quality of the series. My biggest mistake was grouping the movies by central character. I should have watched them in sequence instead. If I watch them again, that's what I will do. So, how come they never invited the Mummy to the party? I'll finish them off next October. AMRU 3.
Posted by Fred Theilig at 8:50 PM No comments:

The mysterious Count Alucard (Lon Chaney Jr) is invited to visit the plantation Dark Oaks in the American south. Debutante Katherine Caldwell met him in Budapest and discovered they both share an interest in the morbid. Kat likey the count, but Kat's best Bo Frank no likey him.

Turns out Alucard is actually some relative of the notorious Count Dracula (perhaps his son ...) and has come to America because he has sucked the life out of everyone back home. Looks like it's up to Doctor Harry, doing his best van/von Helsing impersonation, to set things straight.

Well, Count and Kat marry causing Frank to go slightly insane. When he is arrested (for her murder, no less) she visits him in jail to let him in on the plan. I'm not letting you in on the plan. You gotta watch. 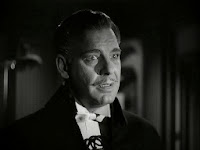 By 1943 the original run of Universal horror movies was coming to a close. Creighton, late to the party, was becoming Universal's man for the job. And in the role of "Dracula" he looked the part. That of a brutal European count, that is. He looked nothing like Bela, but because he wasn't playing the same character, that didn't matter. Creighton played all the Universal monsters at one point, as was arguably the worst.

Anyhow, here finally we see the drac to bat transformation only hinted at earlier (Daughter never even bothered to transform). Looks a little cartoonie, but that can't be helped.

A refreshing change of scenery (swamps and plantations), an interesting love triangle, a satisfying ending, and some twists along the way made this a welcome addition to the collection. It even survives Chaney's terrible acting. That man reads dialog like he's playing whack-a-mole. AMRU 3.5.

So, what do you think? Should I bother watching the 1974 Ringo Starr vehicle?
Posted by Fred Theilig at 10:30 PM 1 comment: 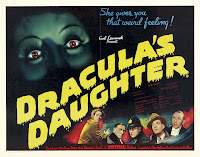 Dracula is dead, thank goodness. Unfortunately, Von Helsing is held in connection to his murder. No, wait ... Von Helsing? Seriously people? Had to tinker with the name, didn't you! Anyhow, Von enlists the help of his good friend Dr. Garth (party on!) to get him out of this fix. But lucky for Von, Drac's body goes missing. Apparently someone needed it for a campfire.

That someone was the Contessa Marya Zeleska, better known as Dracula's Daughter (and, FYI, also a vampire). Seems she wants to rid herself of the family curse, which is to be an undead superhero. Unfortunately, it doesn't work. So, she enlists the help of Dr. Garth.

Well, Garth's solution, without knowing the problem, is to presented herself with her desire and challenge her willpower to resist. That thing she desires? Scantily clad hot chicks. Well, whatdoyaknow ... Before anyone starts huffing for a Vampire Lovers type scene, remember, this isn't even pre-code. 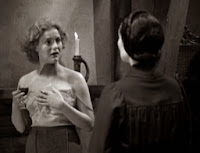 Certainly a different feel for a Universal Horror, almost reminiscent of the later Val Lewton films. And it's for that very reason I like it. The Contessa is kinda hot in a very Devil Girl from Mars sort of way. And the lesbian subtext definitely caught my attention. And if you think I'm reading too much into it, watch the documentary The Celluloid Closet (or read the book - both are on Amazon). This wasn't incidental contact.

The atmosphere was a departure from the gothic tradition, there was a weird love triangle (maybe love rectangle) thing going on, and the acting was solid enough. Complain if you will at the admittedly poor attempt at comedy, but Dracula's Daughter won me over. AMRU 3.5.

Posted by Fred Theilig at 9:58 PM No comments:

After filming of the Bela Legosi classic concluded for the day, another team would arrive to make a Spanish language version of the same movie. Same sets, same script, same actors marks, everything. Just different actors and crew. This is an interesting solution to a problem the studios faced. Back in the halcyon days of silent cinema, they could rewrite a dozen or so title cards and ship their movie around the world. Now, with the dubbing process years away from "perfection", they realized that the great technological innovation called sound made their films much harder to export. Their solution was to shoot it twice.

Same script and same sets, but here's the thing. Different director, cameraman, and editor. They looked at the direction notes and said "we can do better than that", and did. And at almost 30 minutes longer, contained a whole lot more of the story (longer here, is better). One cannot help but to compare the two films, and Tod Browning's piece doesn't always place second, but as a whole, this is a much better film.

The most noticeable difference between the two is the titular character. While Bela might not have been the great actor Karloff and Price were, his rendition of Dracula is iconic for a reason. And Carlos Villarias, who played the Spanish speaking Dracula was terrible Terrible TerRibLe TeRRIBLE TERRIBLE! Having your monster be something of a disappointment is a serious obstacle to overcome, but at least audiences didn't yet have Bela to compare it to.

While I am huge fan of Dwight Frye's rendition of Renfield, Pablo Rubio was almost as good. I still take Frye's performance, but Rubio was no weak point. From there the acting gets better. When Helen Chandler's Mina was under the influence of Dracula, she indicated this by widening her eyes and acting a little strange. Lupita Tovar's Eva's demeanor, however, changed from virginal to something more aggressive in a sheer top. A much more pronounced transformation.

Oh, and like I marvelled that Carla Laemmle who had a brief speaking role turned 104, Tovar turned 103 last summer. But I leave you with a question: is Dracula a dead man who rose from the grave or is he a living man who unnaturally extended his life by drinking blood. Most versions imply the former but this version appears to assert the latter. I'd have to watch them again paying attention to that point. AMRU 3.5.

Posted by Fred Theilig at 8:41 PM No comments:

The House is Black is a short documentary about life inside an Iranian leper colony. Made by 28 year old poet Forugh Farrokhzad, it takes an unflinching look at these forgotten people. But instead on focusing on despair, which would be very easy to do, she looks at the humanity. The victims life is hard but there is still joy.

This short film is important because it is viewed as an important precursor of the Iranian new wave of cinema. This kind of thing might not be what inspires most readers of blogs like mine, but I watched The Story of Film: an Odyssey earlier this year and it brought my attention to such ideas. It's still on Netflix and I urge everyone to watch it. And don't whine about his accent. You get used to it!

Forugh would never make another film. She died five years later in a car accident. She was 32. Watch it on YouTube. It's a very good use of 21 minutes of your life. AMRU 4.
Posted by Fred Theilig at 8:56 PM No comments: 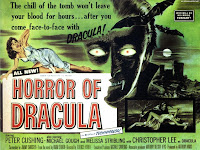 Amateur vampire sleuths Harker (Nobody) and Van Helsing (Peter Cushing) look to end the reign of the evil count.

You know the basic premise. Here, we mix up the characters (Harker is betrothed to Lucy and Mina is married to Arthur) change the details (Transylvania? Never heard of it), lose Renfield, and film it in color. Now Drac has fangs and there is blood to spurt. No ta-tas like in later Hammer films, but it's a start.

Despite the campy feel, I liked this complete reinterpretation of the story. So many of these films are unofficial remakes anyhow, it's nice when it's done well. Fairly well, anyhow. And because it was such a departure from the classic story, you tend to throw the book comparison conversation out the window from the get-go. Christopher Lee makes for a better than average count, starting off as the dashing and mysterious type before showing himself to be the fiend he is.

Hmmm ... what more to say .... The title was changed from simply Dracula in America for the best reason I've seen so far: Bela's classic was still bouncing around theaters and they wanted to avoid confusion. I accept that. Arthur is played by Michael Gough, whom dedicated readers may remember from Horrors of the Black Museum but actually from Batman. Gosh, that's about it. AMRU 3.5.

Posted by Fred Theilig at 10:09 PM No comments: